Cat Litter Trays: Selecting The Right One For You

Having a cat is like having a roommate. They come with their own needs, schedule and even their own furniture. The scratching posts can be stylish - even fun to play on together. The food bowl and water fountain don't take up too much room. But what about the litter box? If you hide it away in a corner, you run the risk of the cat refusing to use it. Yet putting it in full view in your living room isn't exactly appetising either.

Litter boxes can be a real drag to deal with. And yet, they are a necessary evil. Don' t worry though, you do not have to throw in the towel and put up with that smelly eye sore just yet. These days, there are a number of ingenious solutions to help you deal with this problem.

Below, you'll find just a few suggestions to show you the buffet of options available to you. Many of these solutions come in all price ranges, so be sure to shop around and find the perfect one for you and your cat.

One of the most annoying things about litter is that it gets everywhere. And cats cannot help but drag it outside with them as they exit the box, spreading a new amount of litter around your house each time they make a pitstop.

This box, however, is designed to be accessed from the top. This means that the cat would jump up again after doing its business and sit on top of the box - which is a roster. This means most of the sand stuck to their paws would fall off and back in the box through the roster instead of being dragged outside. And that in turn leaves you with litter-free house.

Meanwhile, it isn't the usual eyesore that litter trays can be, fitting in perfectly with the decor of your house. Also, for owners with dogs who raid the litter box, this might just be the right fit as this isn't exactly the easiest litter box to break into.A couple of things to keep in mind:

That said, for the meticulous cat owner, who likes their house litter-free and only has one kitty - or cats who won't harass each other when in the box - this is one hell of a solution. 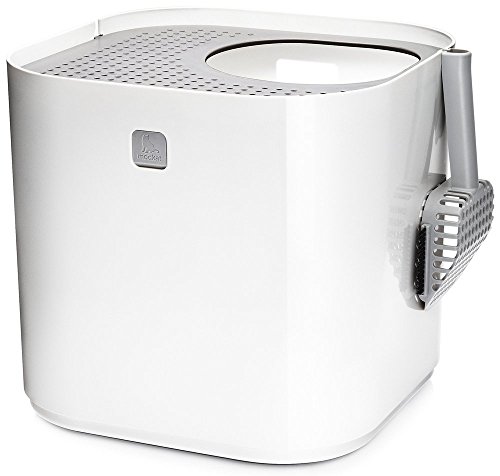 One of the downsides of using your standard covered litter boxes is the plastic clasps. They're annoying to undo, you have to take off the entire top to clean out the box and they tend to break off with regular use.

On top of that, if you have a cat who pees while standing, the way the box is divided can lead to the urine seeping through the seams onto your floor.

This box puts an end to that. Easy to clean, yet covered without any plastic clasp to snap on and off while seamless, it is the upgraded version of your standard covered litter box. 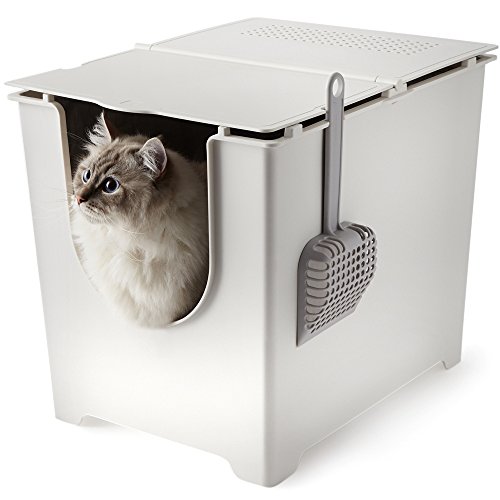 What if we could make the process of cleaning the litter box easier by rolling the darn thing. Yup, rolling it. Isn't that ingenious?

Also, note the price. This is one of the more reasonably priced self-cleaning litter boxes out there. While it is certainly worth investing in the solution that works best for you, this might just be the concept that doesn't break the bank while helping you deal with the most unpleasant part of owning an indoor cat.

Once again though, this is a covered box, so watch out in multi-cat households, households with dogs who love to raid litter boxes and kids who might startle the animal while in the box. 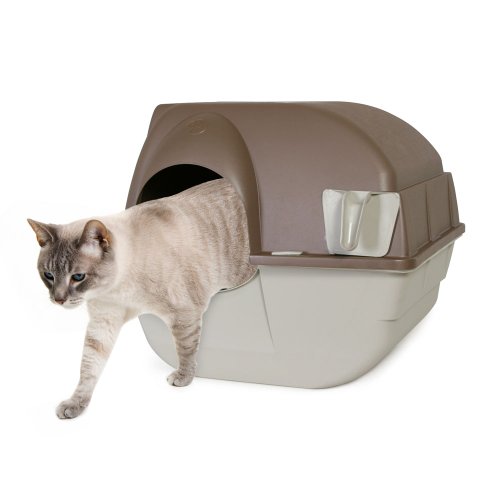 If you truly no longer want to deal with cat waste, this is the mother of all cat toilets. It gets hooked up to water and actually washes the litter itself. The manufacturer claims that you won't ever have to buy, touch or go near cat litter ever again. Eco-friendly and economical are two of the other claims made.

It gets set up in the laundry room or in the bathroom to have access to the water it needs.

The problems that you might expect with this are:

On the other hand, as it is uncovered, it is perfect for multi-cat households. And cleaning out 2 or more litter boxes a day is far from pleasant or easy. This baby would eliminate that entire debacle altogether. 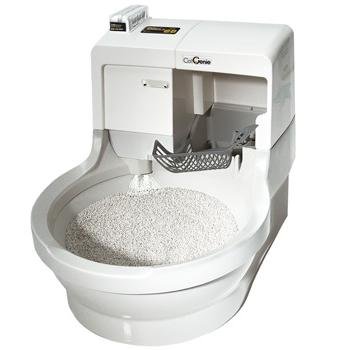 How about giving your cat their very own furniture? Use a cabinet to hold both the litter box and the supplies needed while hiding the entire ordeal in plain sight.

One concern to keep in mind is that cats tend to prefer having 2 or more exit strategies while using the litter tray.This is true in particular in a household where they can be disrupted during their private time. In that respect, it might be smart to get one which has two exits though those seem to be hard to find.

This one, however, is specifically made for multi-cat households and can hold two litter boxes. If guarding or harassment while in the tray does occur, the divider could perhaps be removed to facilitate two exits to one box, solving the issue and preventing litter box avoidance.

That said, there are many pretty and handy cat cabinets with only one entrance which would work beautifully for those who do not have to worry about litter box harassment, so make sure you shop around for the perfect one.

As you can tell, there is an abundance of choice out there. While some of these are the more extravagant versions, you'll find that for each problem there is a solution in your price class to be found.

Do make sure that the box isn't just tailor-fitted to you but also to your cat. If they aren't comfortable using it, it won't actually get used which would be a shame. With all the options out there though, you're bound to find a suitable one that addresses both your and their concerns.