Catch Him Being Good

Many people find that they don't really like their dog's behavior a lot of the time. He's unruly, destructive, barks, begs, raids the trash. They take their dog to obedience class and now Fido will sit on command. But his over-all behavior hasn't improved at all. He has no manners. What to do?

Catch him being good

A really simple, easy way to dramatically improve your dog's overall behavior is to embark on a systematic program of "catching your dog being good." You'll start out by counting out 10 treats in the morning and putting them in your pocket. Throughout the day you are going to make a deliberate effort to notice your pet being good in some way, praise him, and give him one of the treats. Ten times throughout the day, to use up the 10 treats.

The next day, count out 11 treats and repeat the program. Keep adding treats, one per day, until you are regularly rewarding your pet on a daily basis with 50 treats. It's a good idea to cut back on his food, or even better, use some of your dog's daily allotment of food for the treats. Use very small treats- tiny bits of liver or chicken work well. Don't use an entire dog biscuit or strip of jerky as a treat. We don't want to make your pet fat.

Many people are astonished to notice their pet's behavior dramatically improves within two or three days of beginning a "catch the dog being good" training program.

But the dog doesn't know why he's being rewarded

Many people, being people, feel the need to give commands during a "catch the dog being good" program. They think Fido will understand better why he is being rewarded, or they feel they need to be in control, or something. If you must babble at your dog, go right ahead. It's not necessary or helpful, though.

Dogs don't understand English, so your words will fall on unheeding ears. Fido may not have a clue as to why he is being rewarded at first, but since it's fun he'll try to figure it out, and dogs are masters of figuring out what behaviors produce good things. Soon you'll have a pet who is volunteering all sorts of good behaviors at you in an effort to get you to produce a reward.

Which is exactly the point- good manners are behaviors dogs spontaneously offer throughout the day, even if the owner isn't present to give commands and hand out punishments (or treats). If you reward spontaneous behaviors, the dog is more likely to do those behaviors, spontaneously. That's how positive reinforcement works. If you spend time putting cues to those behaviors, your dog will only do them on cue- which isn't what you want. You want your dog to not-bark and not-raid-the-trash all the time, in the absence of cues.

Won't he stop when the treats stop?

No, actually he won't. If you continue on with your "catch the dog being good" program for three or four months, his behaviors will start to become habitual. Dogs are creatures of habit, and what they do every day will eventually become what they do, all of the time.

If you're using essentially random reinforcement in your program- whenever you remember, and whenever your pet does something good- your pet will continue to play the odds and keep offering good behaviors, in case one happens to hit the jackpot. He never knows which particular good behavior will pay off, so he keeps trying to be good, in hope that THIS is the one that you reward.

Won't he only be good when I'm home?

This is a good question. Training dogs to exhibit good manners through owner-delivered punishment, aka "catch the dog being bad" programs, often fail due to this problem. In a "catch the dog being bad" program, the owner sees Fido raiding the trash, and punishes the dog. Many dogs simply learn to only raid the trash when the owner isn't around, because he knows with 100% certainty that he will a) get goodies out of the trash, it's self-rewarding; and b) he won't get punished because the owner isn't there and punishment only comes from the owner. There are no odds to play, it's a dead certainty to him as to which course of action is the best.

In a "catch the dog being good" program, the owner has been "catching" his dog not raiding the trash and giving the dog treats and praise. If your dog hasn't previously established a pattern of trash-raiding there is a very good chance that he will instead establish a pattern of not-trash-raiding and won't take up the habit even when you aren't around to reward it. We're not going to lie- if your dog has an established habit of engaging in self-rewarding behaviors like trash-raiding, pulling on the leash, digging giant holes or ripping the couch to pieces you'll probably have to do something else, something specific, to fix that particular problem.

"Catch the dog being good" programs work best when they are started out immediately, when the new puppy or new dog comes home. Combined with a three- or four- month program of supervision to keep the dog from developing self-rewarding bad habits, a "catch the dog being good" program will produce a lovely well-mannered dog. If you missed that phase, and the dog has established bad habits, a program of this type will improve your dog's behavior tremendously but it probably won't stop previously established self-rewarding bad habits on its own. We will offer suggestions for curing specific bad habits in other articles, stay tuned.

When do I stop?

After you've been handing out 50 treats a day for good behavior for several weeks you can start to replace some of the treats with other kinds of rewards. Try to replace them with praise, petting, games, and life-rewards. If you notice your formerly noisy dog has been very quiet, now is the time to get out the leash and go for a walk or serve dinner. If you notice your dog has barely pulled at all on the leash, whip out the ball and play a fun game.

Only gradually phase out the treats- a formal "catch the dog being good" program should continue for at least three months. Perhaps take away five treats a week and replace them with other kinds of rewards as the dog's behavior firms into good habits. You shouldn't ever completely stop the rewards- throughout the dog's life try to notice when he's being good and give him a quiet pat or something. 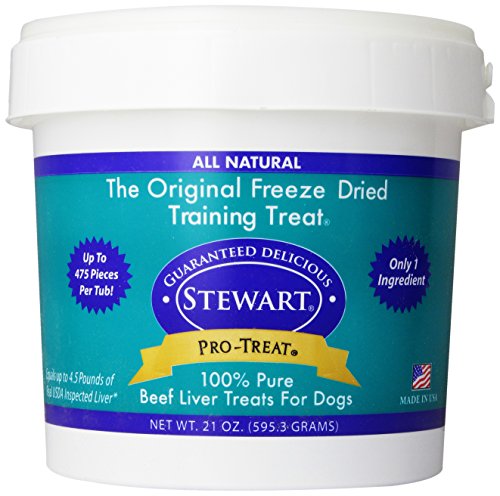 Aren't you just bribing the dog to be good? Why treats? Shouldn't dogs be good because I said so, or to please me? Well, first of all, the main reason we are using treats is that it's very easy to count out 50 treats and make sure you use them all up throughout the day. It's very hard to make sure you handed out 50 praising sessions each day, or 50 fun games. We like other kinds of rewards, but honestly, one of the biggest aspects of this kind of dog-training programs is retraining the dog's owner.

Yes, you heard it right. Some folks have videotaped expert dog trainers interacting with dogs and regular dog owners interacting with dogs, and the biggest difference between the two was the incredible amount of feedback the experts gave to the dogs- hundreds of rewards per session. The regular dog owners were stingy and only handed out two or three rewards per session. In real life, most expert dog trainers and some "naturally good" dog training owners do the same thing- they constantly notice their dog being good and naturally shower him with rewards. The regular dog owner usually completely fails to notice his dog is being good and only notices when his dog is being bad.

So the real intent of this program is to turn your thinking around, and re-train you to notice your dog's good moments. That is why we are using treats. And no, it's not bribery. Bribing is when you get out a treat and wave it at the dog and say "you can have THIS if you do X." NEVER bribe your dog. It teaches your dog to ignore you unless you are waving a treat around, and no one wants a dog that does that. 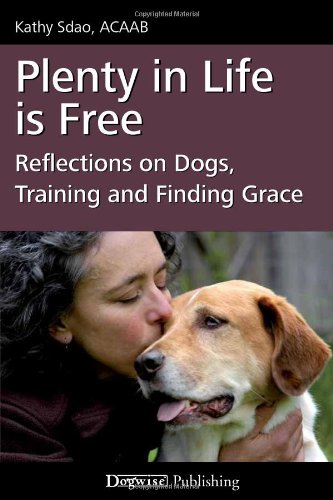 What about Nothing in Life is free?

The "nothing in life is free", or NILF, program is superficially similar to the "catch the dog being good" program. In NILF, a dog has to be good in order to get good stuff. However, we believe that NILF creates an unpleasant relationship between the dog and his owner. In NILF, the dog is essentially being forced to be good in order to get things he needs. If he wants to eat dinner, and he needs to eat dinner to stay alive, he has to obey commands. If he wants to go for a walk, and dogs need to go for walks or they go crazy, he has to sit quietly first. It's a system of extreme coercion.

The owner becomes a dictator in the NILF program, enforcing rules and making his dog follow them. That isn't the kind of relationship or behavior most of us want- we want the dog to happily volunteer being good. It's not a surprise that NILF creates a dictatorship; the program was originally invented decades ago when people actually believed the nonsense about "dominance" and the importance of becoming "alpha" over the dog.

Don't misunderstand- we have seen NILF improve dog behavior, primarily because it reminds owners to create and follow rules. However, we have also observed that many dog owners find it very difficult to implement a full NILF program and feel very uneasy about the whole process. Why? Well, because most dog owners have dogs because they want the dog to be their trusted friend and special companion, not their slave. They want to feed their dog dinner because it makes them feel good to see him eat, not because he realizes you'll starve him to death if he doesn't obey commands- which is what NILF teaches dogs. And most people seem to implicitly understand that this attitude is wrong and poisons the relationship. NILF is disturbing on many levels and most dog owners have trouble being consistent with it due to its coercive, ultimately destructive nature.

We don't see any reason why your dog can't be your friend, partner and companion. It's quite easy to teach a dog to be incredibly well-behaved using simple, pleasant reinforcement techniques. No need to use implicit threats of death or to establish yourself as a cruel dictator, or pretend you're some kind of "alpha dog." No, just remember to reward the behavior you like and your dog will try his best to "please" you. It's that simple. 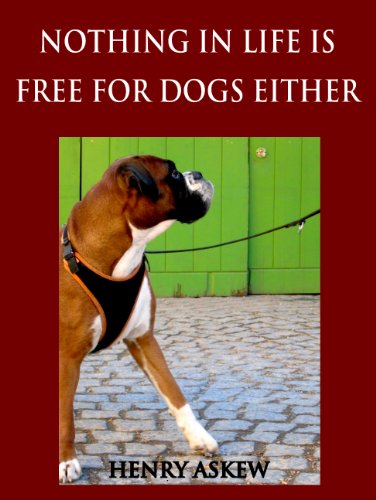 Nothing In Life Is Free For Dogs Either: A Shake-Up/Shape-Up Program for Turning Any Dog Into a Great Dog Practically Overnight Amazon Price: Buy Now(price as of Oct 18, 2014)
Next >> Doggy Play Pen - Keep Your Puppy Safe - Give Yourself a Break!