Cherry picking pocket change for United States error coins is an article filled with United States error coins that can be found in today's pocket change. Right from the bank new rolls of coins can be purchased. These are circulated average condition coins usually and there are many varieties within each denomination, that contain examples struck with certain mistakes from the mint.

Starting with United States one cent coins. We have everybody's favorites, the United States Wheat Cent and the United States Indian Head Cent. Some banks roll coins with machines so buying rolls of pennies from your local small bank can produce many wheat cents for the collector. Some of the dates found can bring large capital gains to the lucky one who went looking.

There are so many coins within the U.S. small cent series that it would take five pages here to list them all. This list includes some major varieties that are commonly found in pocket change or bank rolls.

Any wheat cent is worth at least three cents. They will sell all day on E-bay for a dollar fifty a roll as fast as you can list them. So if you can find these you make a two hundred percent profit on every coin. Then add in the possibility of finding a hundred thousand dollar coin and it certainly can make searching more fun.

Double dies were produced for many Indian Head cents as well as the newer Lincoln cents. These are also too numerous to list here and getting a copy of an error book like The Cherry Pickers Guide is recommended.

When we get to newer Lincoln cents, our pocket change and current bank rolls come into play. This is where it's much more likely to cherry pick a treasure. If you start with the second year that Memorial cents were produced, 1960. There are several collectible as well as sell-able, varieties of the United States one cent coin. A die was produced that had a large "0" in the date over a small "0" and this coin carries a premium of several dollars if found.

In 1969, there is a double date coin from the same series, that will bring hundreds of dollars in mid grade. High grade examples bring thousands. 1970 has a similar die, that has a multiple strike on the date and also commands large sums from E-bay buyers.

E-bay by the way, is a great place to find out just what your coins are worth. A search can be entered for the exact coin you have and you can check what they're selling for, as well as prices realized for past auctions. It's a great free, up to the moment price guide, in real time.

In 1972 United States Memorial Lincoln Cents were again struck with a doubled die. This one is well known among collectors and a middle grade example, of which I personally have found two in bank rolls, will sell for one hundred and fifty dollars, to five hundred in really good circulated condition.

In 1983 another Lincoln error has a reverse doubled die error on the ONE CENT lettering around the bottom of the coin. This error commands several hundred dollars in decent shape. It will take a magnifying glass to see but look for the O in ONE to be strongly double struck. This is a "pup", or area to check, for this variety.

In 1984 Lincoln was cast with a doubled ear on one die and again, several hundred dollars on eBay for any specimen in mid grade. If you are lucky enough to find an uncirculated example, three to four hundred, could be the top bid.

The final double die within this series was in 1995 and a doubled liberty on the obverse of this coin will bring twenty to thirty dollars in mid grade. After this date the process of striking coins was abandoned by the United States mint and pressing coins has been used since. This eliminates the possibility of a coin being double struck.

There are many other error coins within the United States small cent series. Again you will need a good reference guide as mentioned earlier, to make sure your up to date on all the latest prices and trends. The collector base has grown rapidly for anything with a mistake on it from the United States mint and it doesn't seem to be slowing down.

United States Nickels can offer up a way to make a profit as well. For several years of the United States Jefferson Nickel production run, there were coins struck with silver included in the composition of the coins. These coins were struck during the war years of 1942 through 1945. These examples are easily recognized from their extremely visible mint mark directly above the dome on the coin's reverse.

This Mint mark holds the informative tale of the city where it was born. Struck in Philadelphia, Denver, or San Francisco, the nickels containing silver will be the only one's with this mint mark location., The rest of this series has the mint mark located on the obverse below the date for newer issues and the reverse beside the monument for older one's.

The silver content for war time nickels is .05626 oz. pure silver. In today's market that's a few bucks, so a good profit can be made searching for silver in bank bought rolls of United States Nickels. Higher graded examples can be sold on E-bay for well in excess of their silver value so be sure to grade your coin. Use PCGS.com or another on line grading company to see where your find rates. This will help you get a good price if you sell.

Another way to get some free silver is to buy rolls of half dollars. These were struck for one year with planchets made of 90% .900 fine silver. Only one year for the United States Kennedy Half Dollars saw coins of this composition struck and that was 1964. United States Franklin Halves were produced from silver prior to this but are almost gone and unlikely to show up in bank rolls.

Purchasing these rolls of half dollars however can produce United States Kennedy half dollars that contain 40 percent silver. The years the coins were made with silver are 1965 through 1970. Most people have no idea that these are made with semi precious metal and often will roll them up with their regular change and cash them in for bills at the bank. That's where we come in and buy up all the rolls the bank has, cherry pick them and return the ones that are face value only.

So now you know how to make a few bucks cherry picking United States coins. Get yourself a good Picker's guide and head down to the local bank and buy change for a change. A little bit of a pun intended. 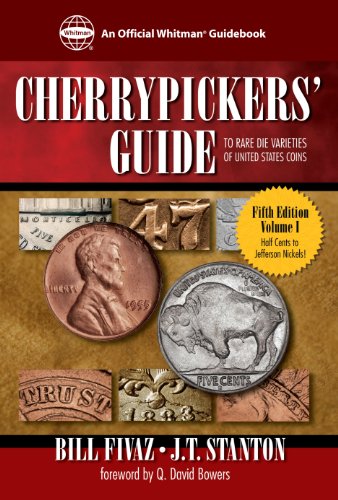 Cherrypickers' Guide to Rare Die Varieties of United States Coins: 1 (An Official Whitman Guidebook) Amazon Price: Buy Now(price as of Apr 14, 2016)
Next >> How to Become a Certified Skydiver