Probably the most often used decorating pattern in 2013 was the Chevron look. It appeared on walls and furniture. I wanted some of this in my home just because it is so modern and trendy. Plus, usually it has some white in the zig zag pattern. I live in an apartment with white walls and lots of white fixtures in the bathroom that really wouldn’t be my first choice if I was building a home. I miss colorful walls and quality materials. However, spending a little bit of time with the right patterns convinced me that I could actually like a modern look. Usually it isn't my style, but it is the style of my apartment. I think I am drawn to the chevron pattern just because it does use such fun colors and it's so crisp and clean.

Why on the Shower Curtain?

I like to use pattern on shower curtains. I like the bath mats to be really soft with a longer pile or even a shag rug style so usually a pattern doesn't work here.I also like to mix and match patterns which is pretty vital if you want to use this in a smaller bathroom. Don't try to match all of your accessories with this. Look for a solid bath mat and luxurious Egyptian cotton towels in a more classic white. This tones down the bold color.It also adds life to neutral rooms. Believe it or not gray has been a pretty popular bathroom color lately. However, it can be dreary. Gray is one of my favorite colors and I even feel this way although my bathroom doesn't have a window. When I finished decorating my gray bath I really wished I had added in a bold pattern. This is even truer if you have gray walls. You need something cheerful in the room.Some people were using this on their flooring or painting it on their walls. In the case of murals it's difficult to get the crisp lines that are necessary for this style. It isn't even your fault; it might not be possible with the texture of your walls. Plus, I think that these will eventually become really outdated and it's not something you will want to spend a lot of money or time on.

There are a few colors that were trendy in 2012 and will continue into 2013. However, smaller bathrooms may not be able to handle such bold paint colors. Plus, we're seeing bold patterns instead of bold color all over the walls.The most contemporary style was probably a yellow and white version. I would just use this as a pop of color in the room and use crisp white accessories on everything else including the bath mats. You could add in rubber duck accessories for a kid’s bathroom and it wouldn't really be out of place.Another style was actually a coral chevron shower curtain. Here, I would give it more of a Hollywood Regency vibe with lots of mirrors instead of artwork and soft gray walls for a vintage vibe. Navy blue chevron shower curtains work well in a nautical inspired room or a boy’s bathroom. If I was going to pick a trendy pattern for this year, the zig zag print would be it. 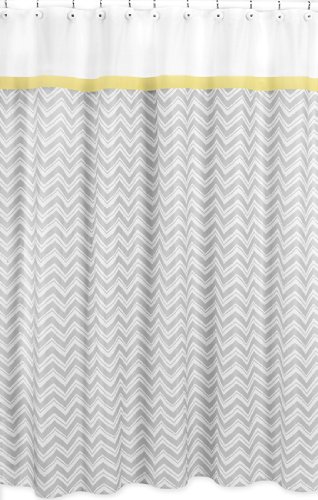 Using It With All Themes

My favorite chevron print bathroom was actually in more of a cottage style room. It uses a robin eggs blue and white. The rest of the pieces are classic with lots of soft upholstery and pastel colors. I don't usually like the cottage look because it is so sweet. However, just bringing in that one contemporary pattern in a matching color palette really made it so much cooler. However, it is so bold that it could be the entire focal point of your room.

This is a trend that you can get pretty cheap. Stores like West Elm and Urban Outfitters carry it at the high end. Etsy, Ebay, and Amazon have it in the mid range and Target has it for sale really cheap usually. The other big trends are more expensive. An ikat shower curtain costs more because of the higher quality of fabric and dying process that is used. The ruffled shower curtain look is more expensive because of how much extra fabric it uses. This is one trend for 2013 you can get pretty cheap.