Chinese stir frying is a quick, healthy and economical way to cook a wonderful variety of foodstuffs of many different types. As the food is cooked at a very high temperature, it retains its nutritional value and texture. As the cooking time is short, stir frying can be made to fit in to the busiest of schedules.

The pak choi included in this recipe is also very often referred to as Chinese cabbage and is a wonderfully crunchy and tasty vegetable, commonly found in authentic Chinese cuisine.

Chinese fried rice is actually rice which has firstly been boiled and cooled before being quickly stir fried in the wok. Cooking the rice is therefore the first step in this recipe.

Bring a large pot of salted water to a rolling bowl. Put the rice in to a fine sieve and wash thoroughly under running cold water before adding it carefully to the boiling water. Stir well, bring back to a moderate simmer and cook in this way for ten minutes.

Drain the rice through the fine sieve at your sink and leave it to steam off for a few minutes, allowing the excess moisture to escape.

Rice is covered and left to cool

Spread the rice out on a large plate, cover and leave to cool for around half an hour.

Put the egg white in to a small stone or glass bowl before adding the corn starch and a generous pinch of salt. Beat with a fork just enough to combine and no more.

Cut the chicken breast fillet in to small bite sized pieces. Stir it through the egg white and starch mixture, cover with plastic wrap and refrigerate for twenty minutes. This process is called, "Velveting," and is a method used in Chinese cuisine to help protect the chicken against the intense heat of the stir frying process and keep the meat beautifully moist and tender. 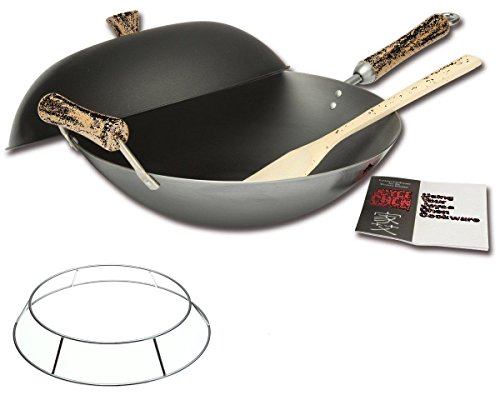 Joyce Chen 21-9972, Classic Series 4-Piece Carbon-Steel Wok Set Amazon Price: $48.99 $21.45 Buy Now(price as of Jan 6, 2016)
It is possible to make certain types of Chinese stir fries in a conventional frying pan but the effect will never be quite so good as when you use a proper Chinese wok. The construction and shape of a wok allows the food to get to much higher temperatures and to cook much more quickly and effectively. Woks are not as expensive as you may think and a bargain wok like this with a lid, spatula and recipe book, will pay for itself many times over.

Put two small serving dishes or heatproof bowls and what will ultimately be your serving plate in to the oven. Turn the oven on to its lowest heat.

Wash the pak choi and shake it dry. Brush or wipe the mushrooms. Slice the base off the pak choi and discard. Slice moderately thinly across the way to produce discs, stopping when you reach the leaves. The leaves should be chopped and set aside. Quarter the mushrooms and cut the onion half in half again.

Pour a couple of tablespoons of oil in to your wok and bring it up to a high heat. Add the cool rice and stir fry over a high heat for about a minute or so. Add a splash of soy sauce, briefly stir through and remove the wok from the heat.

Take one of the serving dishes from the oven (remembering to use gloves) and spoon in the rice. Return the dish to the oven.

Drain the chicken from the velveting solution through a colander at your sink. Stir it around in the colander with a wooden spoon for a minute or so to get rid of as much of the egg white as you can.

Carefully wipe your wok and bring it back up to a high heat, adding another couple of tablespoons of oil. Add the chicken and stir fry over the high heat for a couple of minutes until the chicken is just cooked.

A slotted spoon should be used to briefly remove the chicken to a holding plate while the vegetables are stir fried.

Vegetables are added to hot wok

Put the pak choi, mushrooms and onion in to the hot wok. Keep the heat up high and stir fry for about a minute. You should find the pak choi slices and onion quarters will separate in the heat.

Chicken is re-added to wok with some soy sauce

Return the chicken pieces to the wok along with a splash of soy sauce. Stir fry for a final thirty seconds to one minute maximum. The pak choi leaves should be stirred in to the mix during the final few seconds of cooking.

Take the second serving dish from your oven and spoon in the stir fry.

While chopsticks would be the traditional choice for eating Chinese food, most people in the West would be more likely to use a knife and fork or simply a fork. You may find, however, that using a spoon to eat as well as serve the food is the most practical of all your options.