As well as being an avid writer, I am also an enthusiastic gamer, anime fan, movie buff, and love of all things strange. Being as I live with a boyfriend, I am also particularly knowledgeable about cleaning and cooking. You can join me in my adventure of writing for money here at Infobarrel. Sign Up today! Also, I wrote a book! Check out The Guild today!
InfoBarrel is a writing platform for non-fiction, reference-based, informative content. Opinions expressed by InfoBarrel writers are their own.
InfoBarrel > Lifestyle > Holidays & Celebrations > Christmas

While in much of the world Christmas time is all Santa Clauses and evergreen trees, not every country celebrates it the same. While the holiday is primarily celebrated by Christians as it is a Christian holiday, Christians as well as a those who are none religious or affiliated with another religion celebrate this holiday in their own unique way. Some countries do not even use Santa Claus to deliver presents but a witch or a monk to do so. Come December 25th, let us see what the rest of the world will be up to while many settle down to unwrap presents under the Christmas tree.

Christmas in Mexico is celebrates from December 12th to January 6th. Many bakeries roll out a special oval sweetbread called Rosca de Reyes which is decorated with candied fruit as a special holiday treat. While some festivities start on December 12th, the major celebration of La Posada does not start until December 16th and runs through Christmas Eve.

On each night during the La Posada, children are given candles and reenact the journey of Mary and Joseph before the birth of Christ. Each night they go to three houses and knock on the door, at the first two, the children are denied as is the custom, but on the third they are invited in. After the children say prayers, a party is held in the house with food, drinks and fireworks. This is done each night until Christmas Eve where they put baby Jesus into the manger and attend midnight church service.

While some children receive gifts from Santa on Christmas Eve, their primary gifts do not come until January 6th on what is called the Epiphany, or the day of The Three Kings. Children place their shoes under their bed and the Three Kings will fill them with candy and leave presents.

While there are some who celebrate Christmas on the 25th, many Russia's celebrate Christmas on January 6th because the Russian Orthodox Church uses the old Julian calendar when it comes to religious celebrations. On Christmas Eve, it is customary to fast all day until the first star appears in the sky. After which, they eat a special porridge made from wheat or rice and served with fruit, walnuts and honey.

Many people in Europe and the USA believe that Russian children get presents from an old grandmother named Babushka (which is Russian for grandmother), who is said to have met the Three Wise Men on their journey. However this is just a story made up by American poet and writer called Edith Matilda Thomas in 1907. Most Russians have no idea what the story of Babushka actually is.

Russian children instead get gifts from Ded Moroz (Russian for Father Frost) and his granddaughter Snegurochka. Except instead of bringing the presents on Christmas Eve, the pair bring them on New Years, but only after children gather around the Christmas tree and call them. Ded Moroz is much like Santa Claus but can be dressed in red or blue, but always carries a giant magical staff. 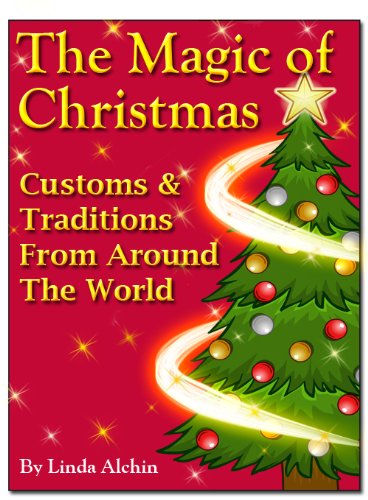 The Magic Of Christmas - Customs & Traditions from Around the World Amazon Price: Buy Now(price as of Nov 18, 2016)

Christians only make up around 2% percent of Japan's population (according to a 2011 survey), however many people actually do celebrate Christmas in Japan, but not so much as a religious holiday. in fact, Christmas is not even particularly a special family holiday in Japan. Christmas Eve is a popular time to spend with spouses or friends, opposed to immediate family. In many ways, Christmas Eve is more akin to Valentine's Day as Spouses exchange gifts and go on dates.

Santa Claus is around in Japan, but he is not so much as a gift giver as he is a decoration, especially on traditional Christmas cakes, which is usually a sponge cake decorated with strawberries and whipped cream. The primary gift giver during Christmas is a Buddhist monk named Hoteiosho, who will bring gifts on Christmas but is not affiliated with the holiday. Japan is a an open place when it comes to religious holiday celebrations. For example, when a baby is born parents may take it to a Shinto shrine, get married in a Christian church and have a Buddhist funeral. The Japanese are truly a marvel at accepting and adapting religions. The rest of the world should take note.

Only 15% of the population of Egypt is Christian and they are pretty much the only people who actually celebrate Christmas there for the religious purposes. Most of Egyptian Christians belong to the Coptic Orthodox Church which actually has spawned some unique Christmas traditions. Starting 40 days before Christmas Eve, Coptic Orthodox Christians fast all day and even after the sun sets they do not partake in any meat except fish, but even then only on some days. This fast is called the Holy Nativity Fast and is held in tribute to the 40 days Jesus spent fasting on a mountain.

Much like Russia, Christmas isn't celebrated on December 25th, but on January 6th in keeping with the Julian calendar.

While only the Coptic Christians celebrate Christmas with fasting and church services, Christmas has become very much a secular holiday in Egypt due to the commercialism of it all. Among many Egyptians, gifts are exchanged, trees are decorated and Christmas feasts are held. Though instead of Santa Claus, Santa is called Baba Noel which means Father Christmas.

Africa is, of course, made up of many different countries. With that each country has their own special Christmas traditions and foods, however many of the countries share many similarities in the way they celebrate this holiday. For example, like many other countries around the world, Christmas in African countries almost always involve fireworks. Families or communities set them off on Christmas Eve, children run around wrecking terror with firecrackers and even some church services involve firework displays.

In most African countries, Christmas is celebrated as a religious holidays so most people end up going to church services, some of which involve fasting. However, the almost universal tradition around Africa is that groups go caroling throughout town. While the tradition of caroling may have died out in the other big Christmas celebrating countries, it is still alive and well in most of Africa.

Christmas in Victoria BC