Civilization V: Brave New World Review - It's All About The Culture

Essentially, in Civ 5 if you wanted to win ever you had to commit to a victory condition and strive towards it. If you didn't win by just before the 20th or 21st century, there was a good chance you weren't going to because clearly you made poor decisions. If you aimed for a cultural victory, it was almost impossible to win in any scenario, as Civ 5 penalizes large civilizations with hefty culture bonuses. This meant to win a culture war, you had to be weak, and all strategy players know what happens to weak nations.

However, Brave New World sets out to improve a cultural players chances in the end game, in doing so they improve the flexibility of the game overall for every type of player. This expansion allows for a new choice in ideology for your people once you hit the industrial age. Players can choose from freedom, order, or autocracy to gain abilities to further work towards a victory condition. These ideologies work much the same way religion worked in Gods & Kings, you found a religion and you get to choose your beliefs. Except this time, you found a nation and you get to choose how you rule.

While new ideologies and their abilities are all fine and dandy, the biggest improvement introduced in Brave New World is the new concept of tourism to combat the overall weakness of fighting for a cultural victory. Instead of now just having a Great Artist, it has been split into Great Artists, Great Writers, and Great Musicians all of which will produce Great Works. These Great Works will be stored in wonders such as the Louvre (for artists) and that will attract toursim. If you reach enough tourism from another civilization, will fall under your influence. When all the other civilizations have fallen prey to your deadly beautiful artwork, you win the cultural victory. Take that, German war machine!

Of course, while Germany and their panzerschrecks may be easy to influence due to low culture, civilizations with high culture are significantly less easy to dominate in this way. That is where a good military offense comes in handy. With the addition of the tourism element, it makes playing towards a cultural victory in the end game much less like a sluggish slowly losing battle and instead makes it infinitely more exciting with numerous new possibilities.

Brave New World, in every way, encourages more interaction between different civilizations especially with the addition of the late game World Congress. This is what really heats up the end game and can expand new possibilities. This is the setting in which you can confer with everyone else and vote on a global policy that gives bonuses or penalties to civilizations. For example, you can strangle the economy of militaristic civilizations by strongly raising their upkeep on their armies or increase the rate in which civilizations generates great people. This world congress can also be used for the new diplomatic victory of naming a world leader, hopefully yourself.

This sounds like a lot of fun, and it is when things work in your favor, however it is a well known fact that the Civilization V AI is just terrible when it comes to decision making. So it makes it very difficult to form voting coalitions and actually win a vote. I actually saw an AI civ that was at war with the civilization I was trying to penalize vote against it. Civ 5 AI hurts my feelings sometimes. 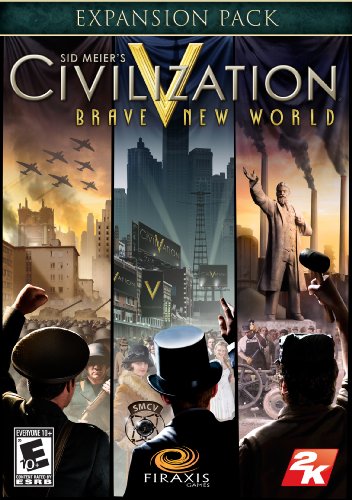 Sid Meier's Civilization V: Brave New World [Online Game Code] Amazon Price: $29.99 Buy Now(price as of Jun 9, 2015)
Brave New World does better utilize spies that were implemented in the Gods & Kings expansion into a bigger and more useful role. However, spies turn less into spies and more into diplomats. They go into city-states and persuade them your way or go to other civilizations and try to swing votes for the world congress.

The final big implementation in Brave New World is that of tangible trade routes. They have always been there, however now there are actual ships and caravans that traverse the world trading goods to other civilizations. however, goods are not all they carry, they also may be bringing religion and tourism with them to a civilization, so now you have to trade wisely. Turning them into actual moving people also makes them attackable. So now if you are waging war with a country, you can cut off their trade by killing their ships and caravans.

Ashurbanipal of Assyria - Unique Unit: Siege tower (replaces catapult), Unique Building: Royal library (replaces library), steal and enemy technology when taking a city but can only be used once a day.

Likewise, there are also eight new wonders that can be built including: Borobdur, Broadway, Globe Theatre, Parathenon, Prora, Red Fort, Uffizi, and the International Space Station (which is a World Congress wonder).

Like every Civilization expansion in the past, this one brings a whole slew of new things to the table. However, during the modern age it still lags terribly. Regardless of that, which I am sure Civilization V players are used to by now, it is a fun game with new maps and new strategies to try out. It definitely renews interest in the game and makes players actually want to play until the end game as they can make up the ground they may have lost early on there with various victory conditions. Though this expansion caters more towards cultural players, it is still amazingly fun for whatever strategy you pick.