Clear Light of Day by Anita Desai: A Book Review

A Story of Family and Nation

Anita Desai is one of my favorite authors.  Her writing style is lush with description and since many of her books are set in India, readers of her novels can immerse themselves in the country as a setting.  While several of her books have been shortlisted for the Man Booker literary prize, she has never won this annual award although her daughter, Kiran Desai, did in 2006 for her second novel, The Inheritance of Loss.

Clear Light of Day has been widely acknowledged as Anita Desai's best known and possibly finest novel.  Set in Old Delhi during Partition and roughly twenty years later, Clear Light of Day examines the dysfunction of the Das family and how it has reached into the present of the novel to profoundly affect the four children's relationships with each other.

Although for the most part Bim, the oldest daughter, is the main character of the novel, Desai also

relies on Tara's sense of nostalgia as she comes home to visit Bim and her younger brother, Baba.  Desai's novel is thick with descriptions of the home the Das children grew up in and the gardens surrounding the home.  The house itself seems like a character representing the gothic heaviness of their childhood and the present decay of their relationships as Bim and Tara work through their perceptions of the past.

There are symbols of death and decay throughout the novel: the cow in the well, Mira Masi's slow descent into alcohol-fueled insanity, and Baba's hypnotic attachment to a handful of records on the gramaphone.  There are also images of wasted potential such as the pearl Tara is looking for that always becomes a snail, Bim's dreams of leaving to become someone great only to stay in the family home and take care of Baba, the parents' air of excitement surrounding Baba's birth that only gets replaced with indifference once he fails to thrive as they expect.

While it would be easy for Desai to focus on the Bim's tragedy of a life wasted, as readers we get instead her simmering anger at her brother and her eccentricity at living life on her own terms despite having to take on too much responsibility as a young woman.  In a stunning epiphany, Bim realizes all along that she has been the glue holding her family together and what had seemed a dismal life of duty she transforms into love for her siblings by forgiving all of them, including herself.  In particular, Desai is interested telling this complicated story of love between siblings not only as the family story but also as the allegory for India and Pakistan as nations who have been at odds since separating in 1947.  Desai's novel offers a hopeful message for all of us struggling with the demons of the past threatening to take over the clear light of the present.

If you read and enjoy Clear Light of Day, I recommend Fire on the Mountain and Fasting/Feasting, both written by Desai, as well. 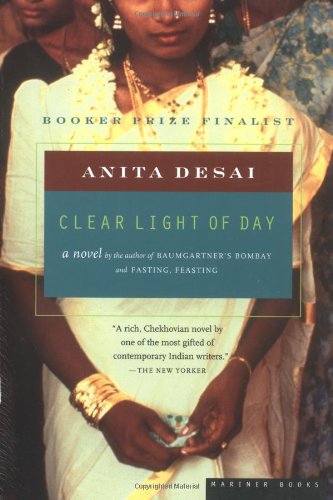