I amÂ a healthcare benefits broker by day, husband and father by night.Â Â MyÂ father and I alsoÂ run a sports blog, JDaddyDu. Interested in writing for Infobarrel?
InfoBarrel is a writing platform for non-fiction, reference-based, informative content. Opinions expressed by InfoBarrel writers are their own.
InfoBarrel > Sports > Baseball

So you have decided to coach t-ball, huh?  Sounds easy enough.  I mean, in many leagues they don't keep score, they don't keep track of outs, and the parents just enjoy seeing their child in a cute uniform.  However, the thought soon settles in that you are in charge of organizing the chaos.  When you step out onto the practice field you do not want to look silly and in over your head by not having a structured practice ready to go.  These kids may be young, but they are still depending on you to help them improve their baseball skills and learn the game that so many of us love.  By incorporating the drills described here, your team can get better while having fun.

This Article is About Fielding Drills

Credit: amazon.comThis article will deal strictly with fielding drills.  With hitting at the t-ball level, many kids just need to focus on finding a good bat, a good stance, and a good swing.  More advanced players can work on different techniques, but most kids just need the basics.

With fielding however, there are a lot of things for t-ball players to learn.  These practice drills can help them get better.

This may sound simple, but there simply is no substitute for playing catch at a young age.  It develops throwing and catching abilities.  It opens up a perfect avenue for teaching a t-ball player a good throwing motion.  Besides that, it's just fun.

Depending on the skill level of the kid, you can play catch several different ways.  Since most t-ball kids do not have good throwing accuracy it makes sense for a lot of players to play catch with an adult.  An adult can softly gauge how hard to throw the ball and can throw it in an area that a kid has the best chance of catching it.  Many times, if you have two kids playing catch together, the balls get thrown all over the place and no one can learn to catch.

If two t-ball players are fairly advanced in their skills, then let them play catch together.  They can get the feel of seeing the ball coming from a teammate (which will of course happen in a game), and they can learn to adjust to the ball when it doesn't get thrown exactly where they want it.

Playing catch is fun and can be done at home, the park, practice or a game.

Many times, when t-ball players learn to properly throw a baseball they end up spending so much time focusing on the throw that they forget to get rid of the ball quickly.  Kids will stand there, gears turning in their heads, while the runner scurries down to first base.  One way to combat this is with the practice drill called Fast Fingers.

To play Fast Fingers, you need a player (or coach) on first base and a player at the pitcher's mound.  A coach rolls the baseball to the player on the mound and once the player fields the ball the coach starts counting.  By the count of 3 (or 4, or 5, etc. depending on your own feel for your team) the baseball should be out of the hand of the player and on its way to first base.

Help your kids focus on not only getting the ball out on time but also making a good throw.

The Colored Dots Game will help players learn to keep their eyes on the ball as it is coming to them in the air, and in turn help them catch pop ups.  The idea is to take 6 balls and 3 markers of different colors, say red, blue, and green.  On 2 balls, color 4-6 red dots about the size of a dime.  Do the same for 2 other balls with the blue marker, and then do the same for 2 other ball with the green marker.

Place the dotted balls in a bucket and have the t-ball player stand about 15 feet away.  You should take a ball out of the bucket (hide the ball so the kid doesn't cheat!) and gently toss the ball towards them.  The player should yell out the color of the dot when the ball is in the air before catching the ball.

Slowly start tossing the ball a little bit harder each round to make the game more challenging.  For a little extra difficulty add in a ball that has no dots on it.  It gives the players something else to focus on.

One fundamental that is necessary in almost every sport is the ability to shuffle one's feet when moving side to side.  The same is true in t-ball.  To do this shuffle game, have a player stand about 15 feet away, with their glove on.  You should stand in front of, and facing them.  Hold a baseball in your hand, and stick your arm straight out in front of you.  You then need to move the ball either to the right or the left.  When you move the ball to your left, the player should shuffle their feet to your left, their right.  When you move the ball to your right, the player should shuffle their feet to your right, their left.  After 4-5 shuffles back and forth, say "ball."  The player should then stop shuffling and get down in a fielding stance.  Roll the ball to them wherever they are.

It helps to have a second t-ball coach standing with the players to help them shuffle since this can be difficult for young kids to learn.

Once the first shuffle game is learned, a more difficult shuffle game can be taught.  The team should line up at a spot on the practice field and shuffle their feet to another spot on the field approximately 30-50 feet away (again, depending on the skill level).  While shuffling, a coach should shuffle across from them, and both people-coach and player-should roll the ball back and forth while shuffling.  This can be a very difficult practice drill for t-ball players, but it is very beneficial on teaching them to focus and move their feet.  If you want, you can even make them toss the ball to another coach after they are done shuffling.

When you are coaching t-ball it is important to teach your kids how to grow their skills, become interested in the game, and have a good time.  With these t-ball practice drills, you can do just that. 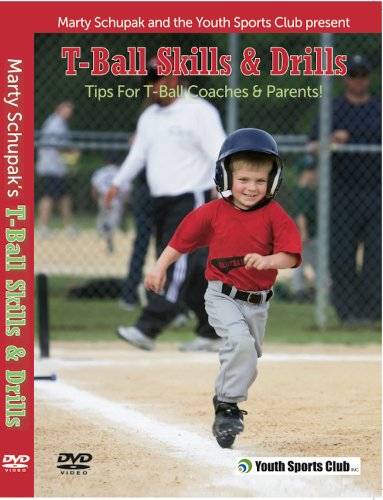