After a dog gives birth, most new dog breeders let out a sigh of relief thinking that the worst is over. The puppies are suckling, the mom is caring for her pups and everything is going well. However, like with human pregnancy, dogs can have complications after birth. Dog owners need to not just be aware of the puppies and their well being, but need to be aware of the mother. There are several common problems that can occur after a mother has finished whelping as well as several signs that newer breeders need to be able to recognize, even if this was going to be their first and only dog birth.

Regardless of if a mother or puppies are acting abnormally after giving birth, owners should still have a vet check up 24 to 48 hours after giving birth. Complications can occur hours or even days after whelping and a veterinarian can check to make sure that many of these do not happen. They will check to make sure that the uterus is contracting properly to expel any leftover placenta or dead puppies that will cause infection if left unchecked. So what will vets be keeping an eye out for?

Metritis is an infection of the uterus that is caused by a number of different birth complications. It is also one of the most common complications. The infection is caused by retained placenta, puppies that expired in utero that were not expelled and instruments used during the birthing procedure. This condition will appear and become progressively worse during the first week after giving birth. Symptoms include loss of appetite, fever, lethargy, panting, foul smelling vaginal discharge and dehydration. As it progresses fast heart rate, vomiting and diarrhea will occur. If left untreated, this infection is fatal to the mother dog as it can quickly cause her to become septic. However, it can be easily treated with a staunch round of antibiotics and an injection of oxytocin to help the uterus contract and expel anything inside. While the mother dog is undergoing treatment for this infection, the puppies will need to be hand fed with a replacement formula. 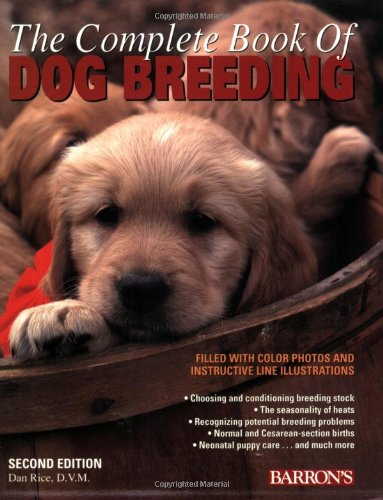 Mastitis is the infection of the mother's mammary glands. This infection is usually triggered after the first few nursing sessions with the pups. Mastitis is often triggered from the puppies sharp nails scratching at the mammary glands. The nipples of the mother dog will appear red and inflamed as well as being hot to the touch. Symptoms of mastitis include fever and pain upon nursing causing the mother to withdraw away from her litter. This results in the pups not growing and crying out in hunger. This condition requires the puppies to be hand fed to allow the mother to recover. If the infection does not clear up, antibiotics may be required.

Eclampsia, otherwise known as milk fever, is caused by the depletion of calcium in the mother dog. This condition usually presents itself within the first three weeks after giving birth. It is more prevalent in small dogs that have given birth to a large litter. Symptoms of milk fever include stiffness when the dog walks, trouble standing, restlessness, pacing, panting, fever, no interest in puppies and as it progresses muscle spasms and seizures may occur. If not treated in a timely matter, this condition can become fatal. Treatment of milk fever is, of course, replenishing calcium levels through supplements. Some breeders have tried supplementing calcium levels during pregnancy to try and prevent this, but that actually predisposes dogs to the condition. Puppies will need to be hand fed during calcium treatments in the mother.

Spotting the Signs that Something is Wrong After Giving Birth

There are things that breeders can expect after a dog gives birth, some of them normal and some can be misconstrued as abnormal. Knowing what a dog will do after giving birth can help breeders know if something is wrong.

Mother Dog is not Eating After Giving Birth

Giving birth is hungry work so naturally a mother dog will be hungry after she is done. Breeders should provide her with an always full food bowl so she can eat and recoup some energy. However, breeders should be sure that she is eating a puppy growth food or high lactation diet. The loss of appetite is a common sign of the uterus infection metitis, so if a mother is not eating, breeders get worried. However, if the mother ate the placenta, she may not be hungry for awhile. If the mother ate the placenta, she should still be eating within the next 24 hours. Alternatively, the mother may not be eating because she does not want to leave her puppies. Be sure her food and water bowls are close enough to the whelping area that she can eat without letting them out of her sight.

Mother Dog is not Going Potty After Giving Birth

Not going the bathroom can be a sign of dehydration and symptoms of birth complications. However, occasionally the mother can be so stressed out after giving birth that they forget to eat or drink. She also may not want to leave her litter's side if she doesn't think it is safe. Try not to crowd the birthing area with people coming over to see the pups. It is an exciting time but too much stress, too much noise and too many people may make the mother too worried to leave her litter. Keep the area quiet and try to entice the mother to go outside and do her business. If that doesn't work, potty pads may also be helpful. If the mother is particularly stressed out, which is more common with first time mothers, a DAP diffuser is helpful to help her relax a little.

Comfort Zone with DAP for Dogs Diffuser and Single Refill Amazon Price: $50.99 $23.79 Buy Now(price as of Jun 3, 2015)
DAP diffusers use pheromones to help dogs deal with stress. Breeders use them to calm down new mothers, shelters use them to treat shelter stress and many average households use them to calm their dogs during loud events like fireworks or thunderstorms.

It is normal for mother dogs to have discharge for up to three weeks after giving birth. It is generally dark green, brown or black in color and does not have a foul odor to it. If the discharge increases instead of decreases as well as takes on a foul odor it is a sign of an infection. If the discharge is watery and bloody, it may be a sign that the placental sites are not receding and veterinary attention will be required.

Panting can be a sign of a number of complications after giving birth, alternatively is can be caused by a number of harmless reasons as well. After the first hours up to the first day, the mother will pant because she is exhausted from the whelping process. The heat of all these new puppies can also cause the mother to overheat. At times, the mother may pant when her pups are crawling all over her because those sharp little nails cause pain response. The mother may also pant during nursing as the suckling causes her uterus to contact. All of this panting is completely normal, however if the panting persists and is accompanied by other signs of infection like a fever then a vet check up should be conducted.