J.Larson Check out my blog the Young Enviromentalist for more on what makes me tick & toc and follow along in my quest to live a more sustainable life http://youngenviromentalist.blogspot.com See you there
InfoBarrel is a writing platform for non-fiction, reference-based, informative content. Opinions expressed by InfoBarrel writers are their own.
InfoBarrel > Home & Garden > Gardening & Yard Care

Companion Planting For Your Cucumbers

Everyone's favorite vegetable is a toss-up between tomatoes and cucumbers. I have to fall on the side of the cucumber as it is great fresh, cooked and as pickles. Cucumbers scientific name is Cucumis sativus andbelong to the melon family so they share traits with watermelon, squashes and cantaloupe. Cucumbers can be paired with some unusual suspects as well as some more expected ones.

What I want to talk about is the pairing of cucumbers with three other much-loved garden plants.

Radishes are a quick growing early planted crop that pairs quite well with cucumbers. They do a couple things that really work well with cucumbers. The season that they can grow in starts quite early, much earlier than you can start hot sun loving cucumbers. So you can grow and harvest a crop of radishes before you transplant a cucumber seedling. The radishes will leave the soil loose and well worked easy for cucumber roots to penetrate.

What else the radishes do is that they repel the cucumber beetle which can reek all sorts of havoc on your cucumbers. In some regions you can even underseed a crop of radishes towards the end of the season of the cucumber and get a third crop from the same garden plot.

Corn one of the mainstays of US agriculture is the most grown crop in the United States with 87.7 million acres harvested in 2013. But despite its large stature in American agriculture it to has a place in the humble backyard garden. By now some of you are thinking about growing some delicious sweet corn in your garden but perhaps you should consider growing a flint or a popcorn variety instead.[1]

So what does corn do for cucumbers in the garden. Well in terms of actually providing some sort of benefit like pest prevention or nutrients it is much more passive than that. They simply grow well together, the cucumbers provide a leafy ground covering for the corn and the corn is simply there, but on some occasions corn provides support for cucumber vines. A down side to this pairing would be the high use of water and nutrients in that section of the garden. It made need more hands on fertilizing and tlc but I feel the benefits of being able to plant two space hungry crops in one location is just great.

Beans especially pole beans are great to plant with cucumbers. The beans being a legume are capable of fixing atmospheric nitrogen into the soil adding much needed nitrogen to feed hungry plants. It's great to plant beans with both corn and cucumbers as all three form a symbiosis called the Three Sisters. These three types of plants grow very well together with the beans providing nutrition, the corn serving as a trellis for the beans and the cucumber providing moisture retention and weed control for the all the plants. 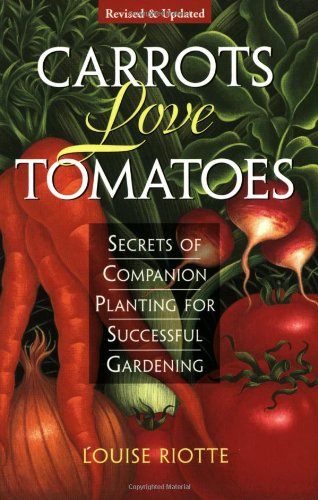 Carrots Love Tomatoes: Secrets of Companion Planting for Successful Gardening Amazon Price: $14.95 $4.34 Buy Now(price as of Feb 19, 2016)
Next >> How to Keep Raccoons Out of the Garden - Don't Let Your Yard be Their Midnight Buffet