Confederate Motorcycles are as unique as they are expensive.  The company, based out of Birmingham, Alabama produces three models, the P120 Fighter, B120 Wraith and the X132 Hellcat.  The company started small in 1991, with owner and former trial Lawyer Matt Chambers looking to revolutionize the world of two wheeled motorsports.  With riding season right around the corner, I figured it would be a good time to write a bit about them.

In 1994, the first X132 Hellcat rolled off the assembly line.  Five hundred or so Hellcat’s would be produced within the first 5 years of production.  Due to unforeseen circumstances, Confederate Cycles was forced to file Chapter 11 bankruptcy in 2001, only to bounce back with a full head of steam in 2003, producing the second generation Hellcat, 75 in total were made.

Now, for the fun part, The Bikes The latest Hellcat model is an absolute stunner.  Motorcycle tradionalists may scoff at its aggressive styling and lack of a two up seat.  However, those who have an itch for exclusivity that rivals any bike on the market, the Confederate Hellcat is for you.  The bike is purpose built with only the highest end components.  To give you an idea, the engine case is custom machined out of 6061 aluminum.  Yep, for you aluminum snobs out there, that’s what they use on airplanes.  Strong and light.  Oh yeah, and expensive.  The cool factor is there, but if you’ve got to pay to play.  The X132 Hellcat price comes in just a hair under $50,000, which, relative to prior models is a bit of a bargain.  You’re not looking at your old 250cc dirt bike here, this monster is equipped with a 2,200 cc V-twin power plant.  Oh yeah, and all that aircraft grade aluminum and carbon fiber adds up to a petite 475 pounds.  Rocket ship.  There were only about 100 of these other worldly bikes produced in 2011.  If you have the coin, be ready for the 2012 models and put your order in now.

Menacing.  Not for the faint of heart.  That’s the P120 Fighter.  Inspired by the outlaw motorcycle clubs of the 1960’s, the P120 is all outlaw.  To look at it is to watch motorcycle history take form.  The bike is like nothing you or I have ever seen before.  It finds a way to blend a minimalist style with the outward exuberance of a Ducati.  It is understated, and over engineered at the same time.  You won’t find its engine concealed with plastic farings.  It is exposed, raw, ready to run.  In terms of motorcycling history, nothing is normal on this bike.  But that’s what makes it so cool.  Nothing is where it’s “supposed” to be.  The exhaust snakes its way to the riders foot, safely blurping out exhaust fumes and notes without the usual visual elements.  The oil tank is nestled beneath the handlebars, and is bracketed with portholes through which you can see the engine’s lubrication bubbling around.  Where is the gas tank?  Don’t bother looking too hard, it’s starts in the tubular spine of the bike but is stored in a reservoir near the bottom of the bike, no doubt to improve handling characteristics.  Like the X132 Hellcat, this thing is priced at a cool $72,000 base.  You will get 160 rear wheel horsepower out of that however, which will make you forget that you just blew insane money on an insane machine. 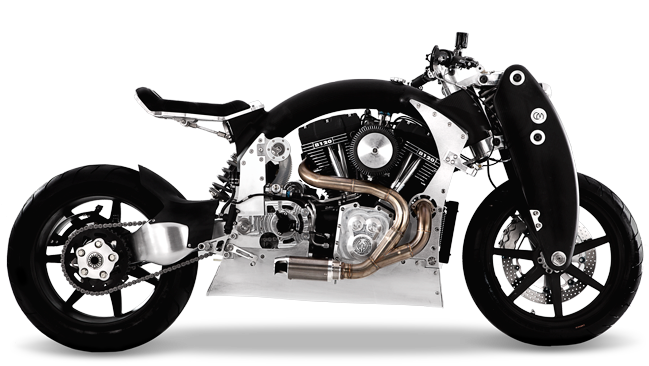 I hope you like attention.  A lot of it.  Because this thing is an attention whore if I’ve ever seen one.  Those who have ridden one have been photographed more than Lindsey Lohan leaving a club at 5am.  A unique mix of hand machined aluminum and power creates one of the most unique two wheeled creations ever seen.  Its nearly 2,000cc motor is so highly strung that before start up, the rider must depress two compression release valves.  If that doesn’t tell you how crazy this thing is, I don’t know what will.  The bike is raw, and light.  It weighs in at a scant 385 pound dry weight.  So, you have 130 lb. ft. of torque on a sub 400 pound bike.  There’s some get up and go right there.  Don’t forget to hold on with your knees.  Like the Hellcat and the P120 Fighter, prepare to buck up for this model as well.  $92,000 msrp.  Woof.

If you would like to get insight into how to ride a bike like this like a pro, I highly recommend Keith Code's Twist of the Wrist.

It is probably the best book on riding out there.

Be safe out there, and keep the rubber side down.