A lot of people in the West would like to get into anime but have no idea where to start. It can be a little overwhelming at first trying to find a series that’s right for you. On the other hand, some are anime veterans who are tired of the same cliches and tired tropes that often dominated the genre - or who eventually get bored of a lot of the anime conventions they found fascinating at first. For those who still want to experience some of the good aspects of anime - such as imaginative concepts and great characterization - but want something a little more palatable to Western audiences, Cowboy Bebop is the perfect solution.

First aired on Japanese television in 1998, and released to Western markets in 2001, Cowboy Bebop follows the adventures of a group of bounty hunters in the near future. In the series’ setting of 2071, hyperspace gateway technology allows humanity to freely travel the solar system. That same technology, however, caused a devastating accident during its experimental stages, which nearly destroyed the moon and wiped out a large portion of the Earth’s population. The remnants of humanity - a mere 1.5 billion in the present day of the series - live in different parts of the solar system. Everywhere from remote comets to Venus to Mars (which is one of the wealthier areas in the series, and a major center for humanity) forms part of a vast network of human space colonies. Because of the difficulty of effectively policing everything, the world of Cowboy Bebop relies on a bounty system as a way of dealing with criminals.

One of the best aspects of Cowboy Bebop is how much of its execution and style can appeal to Western audiences. The series blends the best of anime style art, characterization, and storytelling while adding a lot of Western influence. Many of the story and world elements, despite taking place in the future, are reminiscent of old cowboy westerns. The world and its technology have a wonderful, low tech feel that adds a lot of character to the series, and really contributes to the “Wild West in space” atmosphere. Much of the soundtrack is influenced by American genres such as jazz, and there are plenty of homages and spoofs to foreign television and films - the most hilarious being an Alien parody halfway through the series’ run. Combine this with an almost complete lack of anime cliches, and elements of Japanese animation that tend to grate on American sensibilities, and you have a show that provides an excellent gateway for anime first timers.

Most of the series plays out in a purely episodic fashion - there’s only one real story arc that pops up from time to time, and is resolved in the two part finale. This gives the show a lot of room to experiment - which is one of the series’ biggest strengths and weaknesses at the same time. On the one hand, having a variety of episodes - everything from comedy, to drama, to horror - definitely makes each story feel fresh and keeps viewers on their toes. On the other, this makes the overall package feel a bit inconsistent in tone from episode to episode. It’s a small price to pay though, as some of the individual stories are brilliant - and despite feeling like a slightly different show each time, very few episodes are weak in their own right.

None of the show’s storytelling quality would matter without appealing characters. The cast of Bebop is one of the most interesting and varied in a Japanese animation series. They’re clearly influenced by classic anime that came before it - such as main character Spike’s design being very similar to Lupin’s - but they mostly tend to avoid annoying cliches. Some of the series’ best episodes tend to deal with the pasts of the Bebop crew - they manage to flesh out character histories and make them more sympathetic, without relying on overbearing exposition and beating the audience over the head with its points. Even the more cliched characters - such as fanservice-y Faye Valentine, or the cute energetic Ed - have some great episodes and character moments.

With more and more anime series being made to appeal to a small niche audience of Japanese animation fans, there aren’t many quality series coming out with a broader appeal. For those who want to get into anime without being put off by some of its more niche aspects, Cowboy Bebop is an excellent series for newcomers and old fans alike. 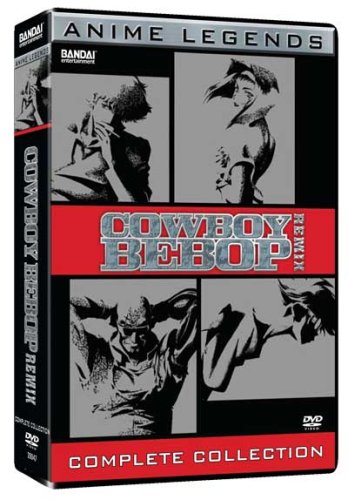