You always hear about scams being pulled on eBay and Amazon and other online selling venues.  But the only marketplace that is ever called unsafe is Craigslist.  This is real shame because sometimes a few of these bad stories will put people off of using this great website.  Like millions of other people, I have bought and sold dozens and dozens of items on Craigslist, and never had a problem.

Perhaps it's because we live in a world where everyone wants to do their shopping behind a computer screen, ever unseen by another person, but Craigslist brings something to the table that no other online selling venue does- human interaction.  When you make a purchase on eBay or Amazon, it really isn't that different from buying an item from Best Buy online.  Sure it may be packaged differently, but you still never see the person or company behind it.  But with Craigslist, it really is a throwback experience.  You are meeting face to face like the old days, cash in hand.  No credit cards, no staring at a monitor.  It is an entirely different experience, and while it certainly has its drawbacks like everything else, it also has some key advantages that everyone should take advantage of.

Don't let the media's harsh light of this website turn you off of it.  If you apply some simple tips to your buying and selling on Craigslist, you won't ever have a problem.

Meet in a Public Place

This is perhaps the easiest thing you can do to avoid ever having a problem.  The overwhelming majority of these "Craigslist horror stories" that you hear about on the evening television occur because the buyer went to the seller's house.

When you agree to buy or sell an item on Craigslist, arrange a meeting place that is convenient for both of you.  If you guys live 20 minutes apart, meet at a gas station, coffee shop, Walmart, wherever that is right in between.  You both only have to drive 10 minutes, and you remain safe.

I once read a story online about a man who was selling some concert tickets on Craigslist.  He met at a Starbucks, and the buyer ended up hitting him with her car to steal the tickets.  The news outlet then described how this was another stunning example of how the website is unsafe.  Like nearly all Craigslist horror stories, this could have been easily avoided.  Instead of walking over to the dark, deserted corner of a parking lot, where the buyers have their car running and won't step out of the vehicle, go up near the front of the building.  If you agree on a Starbucks, then you can even tell the other party to meet you inside.  If the buyer can't agree to this, then move on, they aren't worth your time.

Sometimes you have items where meeting in a public place really isn't possible, like furniture.  In this case, simply bring a friend or two with you to the person's house (or, if you're selling, have some friends over at your place when the buyer comes to pick it up.)  Obviously the item is big and heavy, so you're lucky to have the help anyway!

Other times you will have Craigslist sellers say they don't drive, and you have to pick the item up from their house.  When this comes up, either ask them what the closest public place is that they can walk to.  If they are serious about selling the item, they'll ride their bike or get a ride, or make some other sort of arrangement.  If they say none of that is possible, then thank them for your time and tell them to get back to you if they figure something out.  It's amazing how many people will suddenly have a friend visiting that can give them a lift.

Use Google Voice for Interactions

Before you start texting people to buy stuff, or throwing your cell phone number into your listings, get a Google Voice number.  When you are selling on Craigslist, most people like to text or call you as opposed to emailing.  It's faster and more instantaneous (who doesn't have their cell phone on them at all times?)

However, you should get a Google Voice number first.  Think of it like a middleman cell phone number to give out and use.  It's absolutely 100% free, and it can help you avoid a lot of trouble.

Want to receive alerts on your cell phone, without giving out your real cell phone number?  Done.

Got a person annoying you and want to block them?  Done.

Want to have people be able to text you about your item for sale, but don't want to be woken up at 2 AM?  Done.

Some people are really good at sounding genuine.  It's what makes them good scammers.

You don't have to be overly paranoid, but you do have to be constantly aware when on Craigslist.  Don't change your safety tactics just because the person seems normal.

It's okay to be kind of a jerk on Craigslist when you are just concerned for your own safety.  If you agree over the phone to meet inside the local Starbucks, and they ask you to come out to their car instead, say no.  If the person is serious about buying the item, they will summon the strength to walk inside.

Furthermore, don't be intimidated when you meet in person.  I've met several people that act very timid and scared during the in-person encounter.  They're just people, it's no different than if you were buying something at Wal-Mart.  What's more, they are people interested in the same sorts of things as you, that's why they're buying from you!  So stand tall and don't get pushed around.

If someone asks you to take payment other than cash, tell them no way.

I've already said this, but I will say it again.  If you use common sense, you will never have any problems with Craigslist transactions.  I've bought and sold tons of items, met all kinds of different people, and never had a single hiccup or been scared along the way.

If you're feeling really uncomfortable about a deal, call it off.

If you're feeling really uncomfortable from a particular person, stop talking to them.

But please, don't not use Craigslist, one of the best ways to buy and sell things online, just because you're scared thanks to a few news outlets looking to make some money. 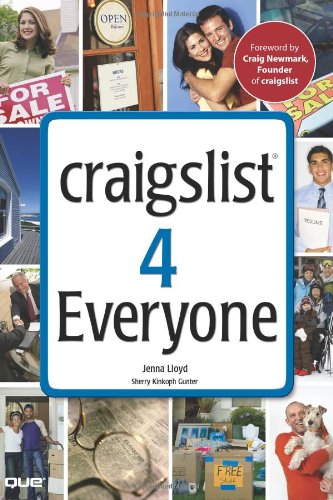