Creating A Play Space For Your Leopard Gecko

Leopard gecko's are very curious creatures that need exercise, and places to explore. This keeps them happy, healthy and energetic. One of the best ways to accomplish this is by creating a designated play area (separate from his home) and fill it with toys, and puzzles that he can use to get out his energy. The following video is an early example of what my wife and I put together for our gecko.

My wife and I started out with one shipping box that we found lying around, but quickly realized he would need more room to explore. As a result we added a second box and connected them with felt for him to climb over the walls, and a cup for a tunnel that he could walk through.

From the video above, you can see we made it a multilevel space, so he had plenty of high places to climb, as well small caves for him to hide in. Creating additional levels to his play area also kept his playground compact, so it could easily be put away if company was coming over.

Felt was used as the main material that lined the cardboard. This was used because of two big reasons.

Lastly, tape was used to bind everything together primarily because using glue meant there would be fumes associated with it, and staples meant his belly could be poked by something sharp.

Over the last few weeks, we have needed to make several changes/updates to our leo's new playground. A lot of this has been as a result of trial and error.

Finally, what toys should you include as part of your leopard gecko's new playground? Leopard gecko's love to crawl in small spaces, as well as climb over objects. As a result, you can include things found around your house, such as empty paper towel rolls, or a mashed up towel.

The other option is to go with a theme, and purchase additional accessories. One such fun theme is jungle, and including fake plants and other objects to let your pet explore.

Thoughts or comments? What other ways have you given your leopard gecko exercise? Any ideas on new additions or expansions to our leopard gecko's play area? Put your comments and suggestions below. 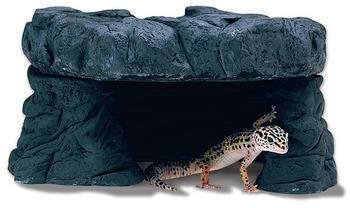