Cryptic Crosswords: Hints on How to Solve Them

Cryptic crosswords are addictive but some people find them really difficult. Cryptic crosswords can be frustrating and puzzling but are also very enjoyable. Solving the tricky clues is a very satisfying process. Practice makes the whole procedure easier.

Lateral thinking is a great help when trying to solve clues. When reading a clue, the seemingly obvious meaning is probably way off the mark. Ponder over every possible meaning of every word. Particularly look for way-out alternative meanings of words. The words used in the clue will suggest ways of deciphering the clues. The trick is in knowing the 'code'.

Clues generally fall into one of several categories.

AnagramsAnagrams are perhaps the backbone of cryptics. With an anagram, the letters of one or more words are re-arranged to form a new word or words. Hints that may suggest an anagram include words such as: damaged, untidy, altered, upset, relocate and even drunken.

Complex AnagramsThese may have letters added or removed. Words such as 'has no right' in a clue may mean the letter 'r' has been removed. Cryptics are full of abbreviations, thus 'r' stand for 'right', 'l' for 'left', etc. North, south, east and west may be represented by 'n', 's', 'e' and 'w'.

For example: I leave recital the worse for wear to get some wine (6 letters). If the letter 'i' is removed (leaves) 'recital' the remaining letters can be re-arranged to form the word 'claret'. 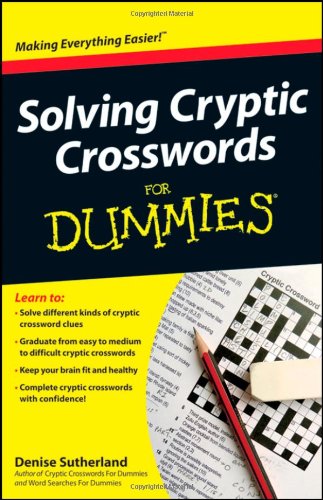 Solving Cryptic Crosswords For Dummies Amazon Price: $14.99 $8.59 Buy Now(price as of Jun 14, 2015)
This designed to help even casual crossword players solve the mysterious cryptic crossword. With Clear explanations, helpful hints, and practice crosswords all help the solver develop a strategy.

HomophonesThese are words that sound the same but have different meanings eg beat, beet, ways, weighs. Homophones are suggested by such words as: we hear, say, sounds like.

For example: Uttered correct liturgy (4 letters). Uttered suggests a homophone. The answer is 'rite' which fits 'liturgy' and sounds the same as 'right' (correct).

Hidden wordsThe answer may be hidden in the clue, generally over two words, taking the last letters of one word and the first letters of the next to form a new word. Hints include words like: in, inside, contain, held in, includes.

For example: Part of church will half-collapse (4 letters). If you take 'half' 'of collapse', you end up with 'apse' which is part of a church.

For example: Novel – Returned in Twenty-One Days (3 letters). Although this clue seems to be suggesting a book, the answer is 'new' (synonym for novel) found in reverse order in 'twenty'. 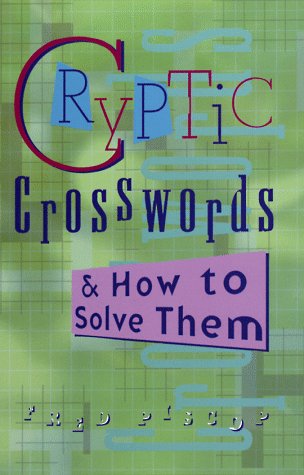 Cryptic Crosswords & How to Solve Them (Official American Mensa puzzle book) Amazon Price: $19.98 Buy Now(price as of Jun 14, 2015)
Step-by-step instructions are given in this book. Hidden words, homophones, anagrams, reversals and double definitions are all dealt with.

PunsPuns often consist of several words and are a great help as finding the answer to one of these clues may result in extra letters in other parts of the grid, thus making the solving of further clues a bit easier.

For example: We haven't caught up for ages in pidgin (4,4,2,3 letters). 'in pidgin' suggests a colloquial saying and the answer is 'long time no see'.

SynonymsSynonyms are often quite short. Look for one word which covers both parts of the clue. In a way, these are like homophones in reverse.

For example: Gains properties (5 letters). The answer is 'lands' which fits both 'gains' and 'properties'.

Headless and TaillessWords such as headless, footloose may mean that the ultimate answer may be minus a letter at the beginning (for headless clues) or end (for tailless clues).

For example: Pop removes husks of acorns to make food for moviegoers (7 letters). Removing the 'husks' (outer letters) of 'acorns' give you 'corn' which, together with 'pop' at the beginning of the clue gives you 'popcorn'.

Odd/Even/AlternateUsing 'odd' in a clue could indicate an anagram or be a code to take the 1st, 3rd, 5th, letter etc. In a similar manner, 'even' could mean to take the 2nd, 4th, 6th letters to form the answer. If the clue suggests 'alternate', take every second letter.

For example: An assistant for Ariadne? That's odd (4 letters). 'Odd' suggests taking the odd letters. The 'odd' letters of 'Ariadne' gives 'aide' which is an assistant.

PalindromeWords suggesting a palindrome (which is a word that reads the same either from the first letter or from the last letter, such as 'level') include 'both ways', and 'coming and going'. 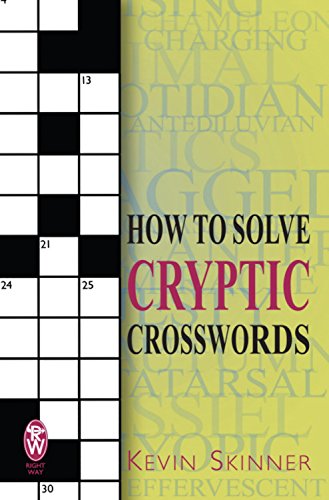 How to Solve Cryptic Crosswords Amazon Price: $4.45 Buy Now(price as of Jun 14, 2015)
Solve those trickier puzzles with ideas from this book. Expert crossword compiler and solver Kevin Skinner shows how with simple but clear explanations.

In, Out and RoundIf these words are used in a clue, look for some letters inside, outside or round other letters.

For example: Ends right inside folds (7 letters). The answer is 'creases'. The letter 'r' is placed 'inside' ceases (ends).

Insertions (words in words)Here, a word is placed in the centre of another word to form the answer. Words such as 'in', 'within', 'somewhat' may suggest this type of clue

For example: Honest, it could be somewhat misconstrued (4 letters). Part (somewhat) of 'misconstrued' is 'true' which fits the other part of the clue 'honest'.

Cryptic CluesThese clues have a straightforward solution providing the clue is interpreted in the correct way. Thus 'flower' may not be referring to a bloom but to a river ie something that flows.

For example: No room for vowels on the El Cid TV screen (1,1,1 letters). Removing the vowels from 'El Cid' gives LCD which fits the last part of the clue 'TV screen'. 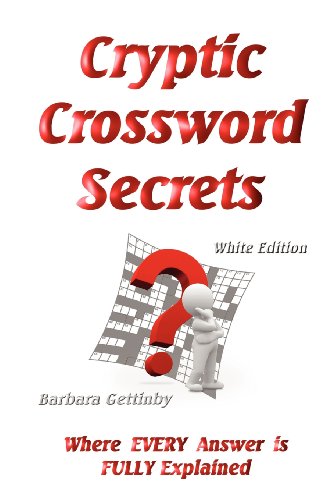 Cryptic Crossword Secrets Amazon Price: $16.00 $9.75 Buy Now(price as of Jun 14, 2015)
Every answer is fully explained in this manual. Straight clues are given for each cryptic clue to give hints that might help. Full explanations are given in the answer section.

CombinationsTwo type of clues are used in the one clue.

For example: Pour tar over first Soviet Russian leader (4 letters). The words 'pour' and 'over' suggests letters around another letter. 'first' is hinting at using the first letter 'of Soviet'. If 'tar' is 'poured over' 'S', you get the word 'tsar' which is a Russian leader.

Abbreviations, literary quotations, allusions, personalities, and combinations of the various types of clues are all grist to the crossword compiler's mill. Roman numerals, chemistry abbreviations, points of the compass, weights and measures and musical terms will all appear from time to time. References may be made to foreign languages.

Remember, nothing is as it seems. It is an stimulating battle of wits between you and the compiler.