Find me on Google+ Like what you see? Think you can do better? Sign up for InfoBarrel!
InfoBarrel is a writing platform for non-fiction, reference-based, informative content. Opinions expressed by InfoBarrel writers are their own.
InfoBarrel > Travel & Places > Places > Czech Republic

The Czech Republic (formerly the western half of Czechoslovakia) is in Central Europe, directly above Austria. Culturally, it is divided into three regions: Bohemia, on the west; Moravia in the east; and Silesia, which borders on Poland.

The country's official language is Czech, a West Slavic language which is spoken natively by about twelve million people. It has been a continuously inhabited and settled area since Neolithic times and became organized politically in the 9th century, and remained a significant political power through the Middle Ages, until it became part of the Hapsburg dynasty in the early 1500s. After World War I it was joined with present-day Slovakia (formerly a part of the Austro-Hungarian empire) until dissolving peacefully into the Czech Republic and Slovakia on January 1, 1993.

Czechs have a rich cultural history which is largely motivated by contact with other cultures. They have produced many important scientific inventions, such as the contact lens, the screw propeller, and the science of genetics. Czech composers include Leoš JanáÄek, Antonín DvoÅ™ák, Bohuslav MartinÅ¯, and BedÅ™ich Smetana, and Beethoven and Mozart had close connections with families in the Czech Republic. The Czechs have also produced a number of important writers: Antonín Jaroslav Puchmayer, who defined the Czech poetic style; Milan Kundera, perhaps the most-read Czech author; and many others. Czech literary history is also a political history, with authors founding, joining and splitting from political and artistic movements and philosophies numerous times in their careers.

Czech architecture is also justly famous, with structures dating to the early Middle Ages still standing, and continuing to exert a real influence even into the present day. In Brno, for example, you can see the Villa Tugendhat, designed by Mies van der Rohe; churches and cathedrals dating from the Medieval, Baroque and Functionalist periods; many buildings of Art Nouveau design; and the Brno Exhibition Centre, a trade exhibition centre done in modernist style.

The most popular Czech sports are soccer and ice hockey, although the country has produced many world-class tennis players. Skiing is also quite popular in many areas and there is an Olympic training centre at Nove Mesto.

Czech food is largely based on meat dishes, the most common being pork. Expect a side serving of cabbage and dumplings. Kolaches are the famous round pastries with a fruit or cheese filling (the word comes from "kolo", wheel, so kolaches are "little wheels"). Breaded fried cheese served with french fries ("hranolky," meaning "little logs") and tartar sauce is popular everywhere. Czech beer also has a long history; the Czechs invented pilsener (named after Plzen), and the country has numerous microbreweries, which must all adhere to strict national standards for beer. Czech wine is also becoming well-known and the Moravian climate is ideal for many kinds of grapes.

Travel to and from the Czech Republic is easy by train, and several of the major cities have airports. Most metropolitan areas have advanced public transportation systems.

The scenery is beautiful, and quite varied, from plains surrounded by low mountains in the west, becoming hilly in Moravia, and mountainous near the Polish border. The country has transformed about 30% of its energy to nuclear power, moving away from the traditional soft brown coal. The Czech people have a very strong industrial and manufacturing base and host many international trade fairs.

The country is the home of one of the most famous steeplechase races. 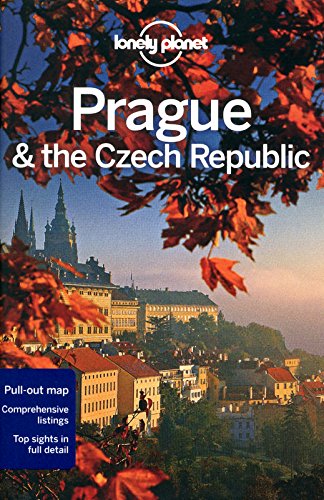 Lonely Planet Prague & the Czech Republic (Travel Guide) Amazon Price: $19.99 $14.38 Buy Now(price as of Aug 28, 2015)
Get the paperback version rather than the Kindle version so the maps will be big enough, and don't stop at Prague, but keep time in your vacation for all the breathtaking sites in the country!
Next >> Beskydy Mountains - Cycling, Swimming, Hiking, Skiing and Exciting Museums