There are several breeds of dairy goat. The Toggenburg, British Alpine and French Alpine are three that provide milk and cheese to thousands of people across the globe.

Like the Saanen, the attractive Toggenburg dairy goat originated in Switzerland. It takes its name from the Toggenburg Valley. It was the first goat breed to be officially recognised and is generally regarded as the oldest known dairy goat breed.

Of the Alpine breeds, the Toggenburg was the first to be imported into Britain with the first animals arriving in 1884. The British Toggenburg has been developed from the original through cross-breeding and selective breeding for specific characteristics. The Toggenburg is the most numerous goat breed in the United States. The first Toggenburg into Australia were imported by private breeders.

Toggenburgs are known for their long lactation periods, with the milk being of good quality and in very acceptable quantities. The milk has a fat content is usually between 3% and 4% although milk volume produced is less than the Saanen. They are a compact, hardy breed slightly smaller than other breeds from the Alpine regions. Does weight 55kg or more and bucks are somewhat larger. Toggenburgs are good converters of feed to milk.

Toggenburgs are regarded as a medium sized goat. The standard for Australian Toggenburgs is 79cm for does and 90cm for bucks. It is robust, active and well-proportioned. The body is large and deep. From the side it exhibits the wedge-shape that denotes a good milking animal. The thighs are thin and the hocks set wide apart, giving plenty of room for the udder. From the rear, the appearance is again wedge-shaped. They have a deep, wide udder, carried well under the body and attached well to the front and high up to the rear. It is round or globular in shape and the teats should be a comfortable size for milking, tapering slightly and pointing downwards. Once milked, the udder has a collapsed appearance.

The Toggenburg is well-boned and a free mover with strong, straight legs. The topline is straight, sloping off only slightly at the tail. They have a fine, neat head. The profile may be straight or slightly dished. The full, bright eyes are set wide apart and the muzzle and lips are broad. The long, slender neck flows into the shoulders without having a dip behind the neck. There may or may not be tassels and/or horns.

The skin is supple. Colour varies from shades of fawn and brown through to dark chocolate. There were white or cream stripes on the face from the eyes to the muzzle. There are also markings on the legs from the knees and hocks to the feet, also on the rump and tail. There may be white around the edges of the ears. With age, these markings can fade considerably. The hair is short to medium in length. It is soft and fine and lies flat on the body.

The coat of the male is longer and coarser. The facial stripes become less clear as the animal ages. Males may have longer hair on the face, shoulders and hind legs. He should be masculine in appearance and strong without being heavy-boned. As with Saanens, polled bucks should not be mated to polled ewes as the progeny are generally hermaphrodites or sterile males.

Toggenburgs are sociable and tend to stay in groups. They are easy to manage and no trouble to train to the routine of a milking shed and/or routine. They have excellent longevity.

Unlike the Anglo-Nubian, the breed is not suited to hot climates but prefer cooler or at least temperate regions. They make an ideal house goat and are happy under free range conditions. 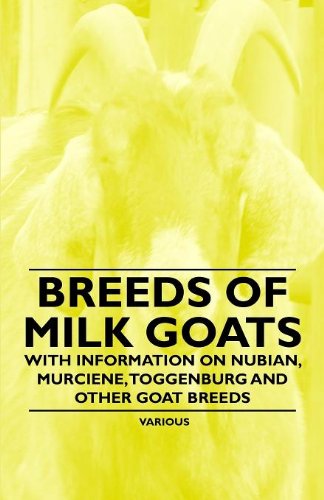 Breeds of Milk Goats - With Information on Nubian, Murciene, Toggenburg and Other Goat BreedsAmazon Price: $26.45 $18.79 Buy Now(price as of Jul 14, 2013)
This contains material dating back many years; all chosen for its relevance and interest.

The Alpine breed splits into two types. The French Alpine and the Alpine Dairy goat are one and the same. This type found its way to the United States. They were more uniform, bigger and better producers than their predecessors which came from Switzerland. Today's French Alpine is a prolific milker.

The Alpine can be any colour as long as it is not all white. The patterns of the multi-coloured coats are described in various terms such as 'chamoisee', 'pied', 'cou blanc', 'cou noir' and others.

Generally the French Alpine is short-haired. Bucks have a fringe of longer hair along the middle of the back and a profuse beard. The profile should not be convex. The erect ears are of medium size and fine-textured. The udder is large and well-shaped. The teats are well-placed.

The Alpine is larger than some breeds, measuring 76cm to 101cm inches at the withers and weighing from 61 to 77kg depending on sex and age. It is a tough, adaptable breed, maintaining good production levels and thriving under all conditions and climates. 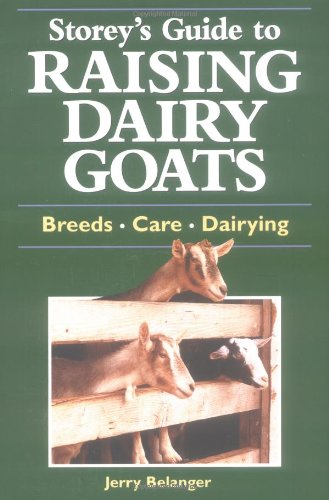 In 1903, local British goats were crossed with Swiss Alpine goats. The result was the British Alpine which is tall and rangy.

Does measure 83cm at the shoulder and bucks about 95cm. The British Alpine is sometimes described as being like a Saanen in its build and like a Toggenburg in colouring.

They have an elegant air with the typical wedge shape of a good dairy goat. They are medium to heavy producers. The fat yield ranges between 3% and 4%. The face may be dished or straight. The British Alpine has good legs and feet. The udder is well attached and attached high at the back and well forward at the front. The skin should be dark coloured with good-sized teats. The males have good width across the front and rear.

Does generally have a short, fine coat but the bucks may have longer hair. It is sleek and black though some have a fine, grey undercoat. White markings on the body often fade as the animal ages. The breed standard specifies white stripes from the muzzle to above the eyes. There should be white from the knees and hocks down, under the tail, on the rump and on the edges and tips of the ears. There may or may not be horns and/or tassels. The chest is deep with good width between the front legs.

The head is long with bright, full eyes and erect, forward pointing ears. The neck is long and the withers high. The long, flat croup slopes from hip to tail. The pin-bones are wide and prominent. Does show a definite wedge-shape both from the side and from behind. Thin thighs give plenty of room for the udder. Teats should be well apart, pointing somewhat forward and down rather than outward.

In a mixed herd, British Alpines tend to seek out their own kind. They are good jumpers and are efficient foragers.