Baseball fans, you can also check out my other baseball article on Baseball Hall of Famer Robin Yount.
InfoBarrel is a writing platform for non-fiction, reference-based, informative content. Opinions expressed by InfoBarrel writers are their own.
InfoBarrel > Sports > Baseball

Dale Murphy was born on March 12, 1956 in Portland, Oregon. Murphy began playing baseball at the age of ten in Little League baseball. He was not a star player at first, but Dale continued to play the game and matured mentally and physically. Eventually, he developed into a two sport athlete at Woodrow Wilson High School in Portland. He played baseball and football, but he prospered playing baseball and attracted the attention of the Atlanta Braves. Murphy was a catcher and had a rocket arm and the Braves drafted him in 1974. The Atlanta media was excited about his draft selection and predicted that he would become a future major league great.

Dale worked his way quickly through the Braves' minor league system with his impressive skills. He made his first major league debut on September 13, 1976 as a catcher. The following year, he also played sparingly and the Braves projected him to be their future everyday catcher. However, despite having a strong arm, Murphy mysteriously began having trouble throwing out base runners. This liability negatively affected the team because opposing teams would often gain extra bases and score runs. The organization decided to switch Dale's position to first base in an attempt to salvage his career. Unfortunately, he did not make a successful transition and Murphy made a high number of errors. His confidence was also affected and his batting average dropped sharply.

In a last effort to save his career, the Braves decided to switch Murphy to the outfield. This move proved to be the solution to Dale's struggles. He used his strong arm to throw out base runners and Atlanta made him a their starting center fielder. His confidence also grew and his home runs and batting average increased. This move planted the seed for Murphy to become one of the best all around players in the major leagues. In 1982, Dale Murphy won his first of two National League Most Valuable Player Awards. He hit 36 home runs, 109 runs batted in, and had a .281 batting average. Murphy also showed his versatility by stealing 23 bases. He led the Braves to the National League Championship Series. Unfortunately, the Braves lost in 3 games to the Saint Louis Cardinals. This would be the only post season appearance of Dale's career. The next year, he was named the Most Valuable Player again, making him the youngest ever to win the award in consecutive years. Dale hit 36 homers, 121 RBI'S, 30 stolen bases, and scored a career-high 131 runs.

Murphy was also a durable player and played in every game from 1982-1985. He was also an outstanding defensive player and won 5 consecutive Gold Glove Awards from 1982-1986. Dale was fast and prevented many base hits with the ground he covered in center field. Pitchers loved playing with Murphy because he made their job easier. In 1987, he had a career-high 44 homers and 115 walks. He hit 30 or more home runs six times. For unknown reasons, Dale's career began a downward spiral that he never recovered from in 1988. He hit .226 that year and it was also the last year that he was selected to the National League All-Star team. In 1990, the Braves traded Murphy to the Philadelphia Phillies, but the change of scenery could not revive his career. In 1993, Dale spent his final major league season playing for the expansion Colorado Rockies.

Dale Murphy was a great ballplayer and an even better man. You would be hard pressed to find another baseball player that is more universally respected and admired. Opposing teams, fans, and teammates revered him. Murphy can still be seen at Braves' games and is a great ambassador for the organization. He is also an inspiration to children and works for numerous charities for their benefit. Dale has also been an outspoken critic of players who may have used performance-enhancing drugs during the "steroid era." The Braves honored Murphy's career on June 13, 1994 when they retired his number 3.

Unfortunately, the Major League Baseball Hall of Fame has not elected him into their exclusive club. Dale Murphy has been on the Hall of Fame ballot for 15 years and has fallen short of the required votes. His last chance to be elected will have to be through the Veterans Committee. This group of respected baseball people consists of executives, writers, and managers. In my opinion, he has not been elected because he played on bad teams, in a small market, and only appeared in the post season once. I believe that Dale Murphy belongs in the Hall of Fame. His sportsmanship, integrity, and goodwill should also be factored in. Murphy has been and continues to be a great ambassador to baseball. He had an outstanding career and the game is better off because he was a part of it. 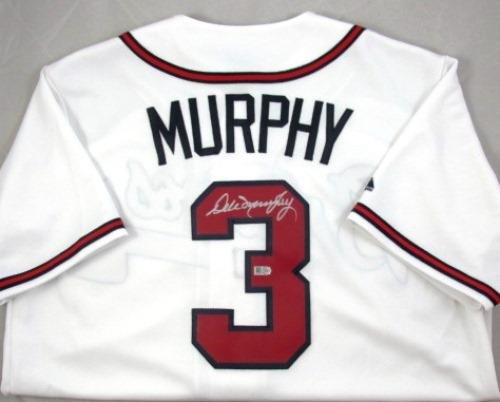 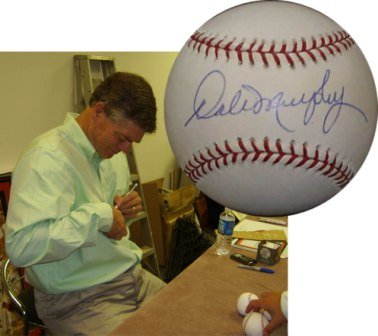 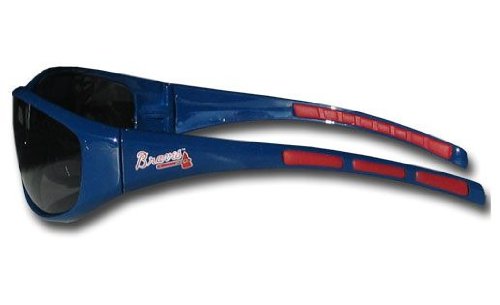 MLB Atlanta Braves Wrap Sunglasses Amazon Price: $14.99 Too low to display Buy Now(price as of Nov 20, 2016)
Next >> The 1994 Baseball Strike and the Demise of the Montreal Expos