Visit Amazon ,  Write for InfoBarrel or read some more rants, raves and musings about classic films and  popular movies in these articles: Best Zombie Movies of All Time Classic Film Noir Movies 50 Years of Classic Sci-Fi Movies Westerns that Defined the Genre Great Spy Shows from the 1970s If writing is your passion and you'd like to earn some money while practicing it,  start here: Write for InfoBarrel
InfoBarrel is a writing platform for non-fiction, reference-based, informative content. Opinions expressed by InfoBarrel writers are their own.
InfoBarrel > History > 1945-2000

War is an ugly thing but it does make for good movies. For almost 70 years, from Stalag 17 & The Great Escape through Patton & The Bridge on the River Kwai to Saving Private Ryan, filmmakers have mined commercial gold by focusing on the unparalleled exploits of the United States military.

While each of the movies  mentioned above are spectacular in and of themselves, there is also cinematic gold in some of the lesser known and largely forgotten films of the 1950s and 1960s such as these: 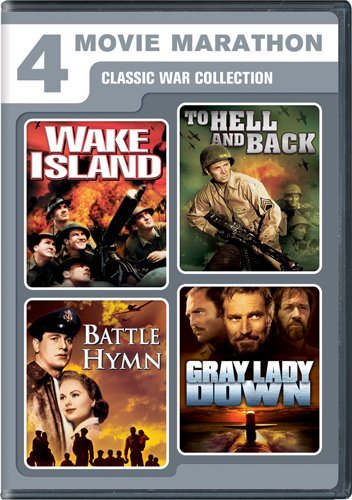 In this movie, you’ll watch the Marines go ashore on an insignificant piece of rock in the Pacific and slog their way past determined Japanese defenders. All the while, soldiers and sailors will continually die. There is never any respite for these warriors. Noteworthy for its final scene, this movie beautifully encapsulates the utter futility of war. Even in victory, there is defeat.

Directed by the incomparable John Huston, starring Robert Mitchum and Deborah Kerr, this remarkably “light” war movie is actually quite deep on many levels. Not only does it touch upon the ethics of war but also compares the rituals and the Marine Corps with the Roman Catholic Church. In short, it is a very compelling study of the desires, compunctions and motivations of human beings.

The forerunner of every submarine movie made in the last 70 years, Run Silent, Run Deep features Clark Gable and Burt Lancaster as the commander and XO, respectively, of a Pacific theater of operation’s submarine. The movie features taut dialogue, extreme close-ups and readily conveys the claustrophobia that service on a wartime sub entailed. Extra drama comes from the fact that Mr. Gable’s character has an Ahab-like fixation on sinking the Japanese destroyer that almost ruined his career. The movie is also notable as big screen debut of the inimitable Don Rickles.

Most remarkable because it details a true story, this movie recounts the three year ordeal of George Tweed on the Japanese-held island of Guam. Radioman Tweed must fend for himself on a small island while also avoiding the perpetual patrols that search for him. John Donne had it right as Tweed must constantly rely on the good graces of the island’s native inhabitants. An excellent portrayal of Tweed by Jeff Hunter in the best performance of his career.

Shot on location in Normandy and utilizing both German and Allied military consultants who took part in the actual battle, this is THE D-Day movie to watch. (Sorry Mr. Spielberg.) It was also the most expensive black and white movie made until Schindler’s list surpassed it 30 years later. The big name actors are too numerous to mention plus there’s the Beachmaster’s dog. Just watch it and revel in the English, French and German dialogue.

Based on the debut novel of James Clavell, this movie does far more justice to the intricate, psychological weavings of the author than later films such as Shogun, Noble House and Taipan. George Segal skillfully plays the Rat. Don’t miss his line, “It’s Hawkin’s dog” and be sure to watch until the very end when Richard Dawson makes his screen debut as the first liberator into the camp.

Made only 20 years after the actual events, this movie focuses on the everyday combat soldier. In fact, there are almost no portrayals of any officer above the rank of “bird” colonel or politicians. Instead, we are treated to the heroics of Sgt. Guffy (Telly Savalas),  Lt. Colonel Kiley (Henry Fonda) and a host of other characters. It is a beautifully filmed movie, though panned somewhat for its historical inaccuracies.

Pompous English officers, dastardly Nazis and Frank Sinatra commanding a trainload of intrepid Allied POWs determined to escape. What else could you ask for? (Vito Scotti as the train driver, you say? You got it.) This movie is a treat on multiple levels. While the acting is sometimes strained, the sentiments are always in the right place. And, you’ll never see the Chairman of the Board die in a better way.

It’s a rare individual who can still name all the actors who portrayed the Dirty Dozen* but there were even fewer American schoolboys in the 60s who didn’t know the movie, the characters and the famous rhyme that delineated their suicide mission. A phenomenal cast inhabits this magnificent piece of military whimsy. The idea that convicted felons would be entrusted with such a complicated and important mission is beyond conception. Still, the acting, the plot and the ending are so completely believable that many thought that the movie was based on a true story.

Though much compared to the previous entry on the list as the American troops are, once again, a ragtag collection of convicts, The Devil’s Brigade actually explores a completely different aspect of World War II, namely, the rivalry and animosity between the purported Allies. In this movie an elite band of highly motivated Canadian soldiers is combined with a ill-trained and demoralized group of Americans. It takes all the guile of William Holden and a significantly stiff upper lip from Cliff Robertson to mold these men into an effective fighting force. The moment not to miss is Cliff Robertson’s delivery, on the eve of the team’s final mission, the most poignant line of the movie when he asks, “Have you never heard a man say, goodbye, before.”

For any war movie aficionado, these movies should all be viewed two or three times to get their full flavor. Don’t forget that many of the actors, directors and crew were present on the battlefields of WW II. most of these movies are based on actual events, though each is fictional to a great extent. Still, there is more than a grain of truth in the pathos, humor and humanity depicted in every scene of the life and death situations shown in these damn good, World War 2 movies from the 1950s and 1960s.

Glad you made it this far

The actors who portrayed the Dirty Dozen are:

If for some reason, you are looking for the names of the Magnificent Seven (and who isn’t), they can be found right here:

Next >> The Mystery of Harold Holt