Our country’s history comprises many mysteries.  Some may never be solved.  One mystery, however, need not stay an enigma: Daniel Boone’s final resting place.

Boone’s life is the stuff of legend – frontiersman, trailblazer, Indian fighter, pioneer, law enforcer.  Many words have been written about his exploits (both true and false), and heremains a prominent figure in the realm of pop culture.  But it isn’t his life that has the seeds of mystery but, rather, his death.  More specifically, the actual whereabouts of his remains are in question.

Daniel Boone blazed the trail into the Kentucky Territory in the late 1700s, helping establish a foothold into what became the Commonwealth of Kentucky.  After setting up Kentucky’s first permanent settlement, Boonesborough, in 1799 Daniel Boone and his family

Credit: public domainmigrated westward to what is now Missouri (under control of Spain at the time).  There, he established himself as a syndic (a magisterial/judicial position) after appointment by the Spanish Governor.  He served as a law enforcing arm of the Spanish government until the area was ceded in 1804 to the United States as part of the Louisiana Purchase.

Boone spent his remaining years in Missouri, his adopted home territory.  For reasons not entirely clear he bore only animosity toward Kentucky, the state he’d helped settle. He reported at one time he left Kentucky when it became “too crowded”.  It is also known he was heavily in debt in Kentucky, and any Missouri lands he secured from Spain (annexed by the United States but returned to his possession in 1814) were ultimately sold to pay off his Kentucky debts. Perhaps he simply wanted to avoid harassment from his creditors.

In any event he expressed no wish to return to his old stomping grounds in Kentucky, and in light of this information it only makes sense that, when he died in 1820 at the age of 85 in the

Credit: Find A Grave websiteMissouri Territory, he was buried there.  His gravesite in Missouri is near Marthasville (in Warren County, about an hours’ travel west of St. Louis).  He was interred near his wife Rebecca Boone, who had died in 1813.

The mystery begins here.  Neither Daniel’s nor Rebecca’s graves were marked until the mid-1830s.  Locals reported the preferred site for Daniel (next to Rebecca) was already occupied, and he was actually buried at the foot of her grave, not beside her.  Furthermore, when markers were finally installed it is believed the one for Boone was placed over the stranger’s grave next to Rebecca.

Meanwhile, the Commonwealth of Kentucky, in 1845, exhumed what were believed to be Daniel’s and Rebecca’s remains from Missouri and relocated them to Frankfort, Kentucky.  It is unknown under whose authority or whose jurisdictional discretion, if any, this act occurred.  The

Credit: Kevin Meyer fact remains something was removed from the Marthasville site and re-interred in Frankfort.

Frankfort, Kentucky, boasts a beautiful monument over what it claims are the remains of Daniel and Rebecca Boone.  No one apparently disputes that Rebecca is now in the Frankfort cemetery.  It is Daniel’s bones that are in contention.

Because of the burial mix-up (Boone buried not next to, but at the foot of, Rebecca) the Marthasville contingent believed Boone’s bones still lay undisturbed in Missouri.  Some slaves were actually buried in the same cemetery, and it is possible a slave’s bones were disinterred and removed to Kentucky.  In 1983 a forensic anthropologist examined a plaster cast of the "Boone" skull in Frankfort.  He reported the skull might belong to a male African-American.  However, this is far from conclusive.

In 2010, to further muddy the waters, after years of insistence to the contrary a civic group in Missouri (Friends of Daniel Boone’s Burial Site) issued a statement saying some of Boone’s bones had been removed to Kentucky.  Reportedly, this document says, only his “large” bones were taken, and his “heart and brain remain where he was buried”.  This statement, no matter how well-intended, serves no useful purpose in putting the controversy to rest as it is not supported by anything concrete.

The forensic work in 1983 is hardly definitive. A statement issued by a non-government agency, certainly one carrying no forensic cachet, proves nothing. The most expedient solution, and one that could incontrovertibly settle the issue, would be to exhume both sets of remains and to submit them for DNA analysis (presuming there is enough DNA present for testing, even if it is mitochondrial DNA).  If nothing more, this would show that the two sets of bones (in Missouri and Kentucky) at least come from the same person, even if that person is not Daniel Boone but perhaps an unknown African-American!

Just for fun, try one on! 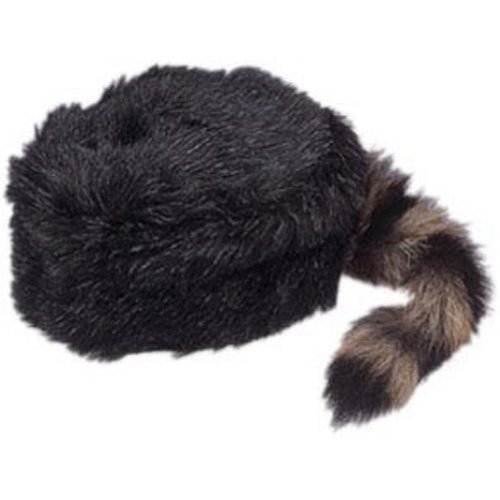 Adult Coonskin Daniel Boone Mountain Man Hat Amazon Price: $6.75 Buy Now(price as of May 27, 2016)
Next >> Fashioning a Reign: 90 Years of Style from the Queen's Wardrobe - Magnificent Exhibition at Buckingham Palace