David Icke and Alex Jones are both professional conspiracy theorists, and though their theories are similar in many respects, their methods and motivations are completely different. While Icke is generally calm, collected, and not incessantly prolific, Jones is constantly broadcasting himself consumed by blind rage; while Icke lives modestly, Jones has amassed a fortune from his work. By avoiding inflammatory rhetoric and opting for a quasi religious message, Icke serves his audience better, though precisely because of his vitriolic fury Jones’ mistruths can be spread more effectively and are more likely to inspire change, albeit of a deleterious nature.

When David Icke began to spread the word of his “reptilian hypothesis” and of his position as “Son of the Godhead” in 1991 he was widely regarded as a lunatic. Over his long career as a New Age conspiracy theorist he managed to transform his genre into a sort of irrationality art form, wherein all of humanity exists under the thumb of alien control. These aliens from the Draco constellation live among us, masquerading as important leaders such as Queen Elizabeth II. Such is the unbelievable scope of his proposed conspiracies that it would perhaps be more accurate to label them as outright fantasies. Nonetheless, Icke’s speeches and books are possessed with some few redeeming qualities. His rhetoric, though entirely based on completely improvable notions, is generally calm and considered. If one is an optimist it is therefore possible to consider Icke as engaged in a Swiftian satire intended to warn of the imminent emergence of a global fascist state. In more practical terms, he can be considered as a man using allegory to promote a simple message: never stop questioning your surroundings. Less optimistic people may brand Icke as some kind of cult leader out for personal gain. This is improbable both because Icke does not actively seek to convert people to his cause and because he gave up a far more profitable career as a BBC newsman so as to live modestly off of his peculiar worldview. Indeed this worldview is so bizarre that it can only be effectively spread as the type of allegory described above and it absolutely cannot inspire change. However, by presenting his facts without emotional embellishment and by refraining from aggressively proselytizing his opinions, at least Icke manages to serve his audience relatively well. Believing in David Icke remains an intellectual choice forced on nobody and open to all.

Alex Jones, on the other hand, does not serve his audience well. Instead he serves himself. His anti-establishmentarian New World Order conspiracy theories seek to foment anti-government sentiment, paranoia, and generalised fear. This effectively spreads his message to the most uneducated and disenfranchised members of the population, preying on their need to displace blame. Like David Icke’s New Age theories, the scope of Jones’ theories is so broad that every event can be ascribed to their sway. Unlike Icke however, these theories have vestiges of a connection with reality since in their narrative an omnipotent global elite controls the world, rather than a race of alien reptiles. Jones also differs from Icke by engaging in a prolific rhetoric of outright rage which often borders on insanity. When interviewed he rarely allows the interviewer time to speak, instead focusing on his rant. In his other forms of media he is also rarely found not screaming or roaring, and constantly makes awfully negative predictions of the future that are always proved false. These aggressively virulent techniques only spread his message further. Overall Jones is a profiteer, effectively crafting both message and persona to attract as much attention as possible to his prolific media output. In addition to successfully enriching himself, his work has also contributed to the negative change in the people’s perception of their government. This is an important disservice to his audience, the members of which flock to Jones out of desperation before radicalising and developing a dependency on his worldview. They are not afforded the clear intellectual choice of Icke’s audience.

Arguably, the most important issue at hand here is not how much either conspiracy theorist is profiteering, now how much either one actually believes their rhetoric. The key issue is whether or not the theory consists of mistruths. In the case of David Icke, his “reptilian hypothesis” may be taken as a matter of faith, akin to a sort of religion dealing with god-like intergalactic overlords (Scientology, for example, is of a similar nature). Though the hypothesis may well consist of lies, proving or disproving it loses significance simply because its very nature precludes the possibility of gathering evidence. In addition, choosing to believe Icke’s “religion” is not necessarily harmful to the individual or to government. This is not the case when it comes to Alex Jones. His theories consist of specific attacks against various governments, the American government in particular. Such attacks cannot be categorised as a matter of faith since they deal directly with the orchestration of current events by a New World Order that acts against the interests of humanity. In this context evidence is de rigueur and the lack of it makes a mockery of the First Amendment. Despite the fact that Jones’ theories sound just real enough to be believed, they have repeatedly been proven to consist of blatant lies, designed specifically to attract a select minority. Even more worrying, the virulent anti-establishment sentiment that Jones provokes is detrimental to governments and citizens alike; nobody except the theorist himself benefits. This difference in truth is what truly separates the theories of these two men.

In conclusion, David Icke serves his audience better by avoiding inflammatory rhetoric and by promoting a quasi religious message that leaves the clear choice to believe or disbelieve. By comparison, Alex Jones spreads his insidious message more effectively but inspires negative ideological change. Overall, Jones’ insane persona enriches him to everyone else’s detriment. 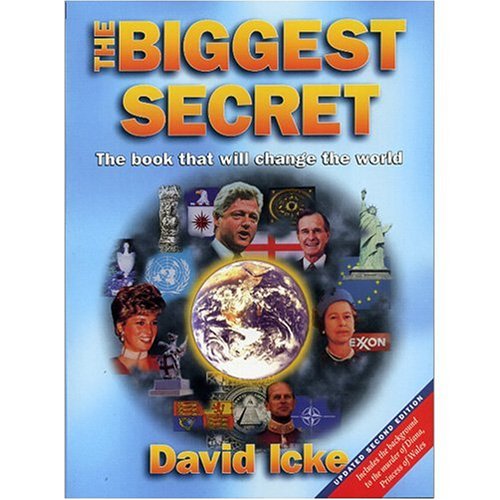 The Biggest Secret: The Book That Will Change the World (Updated Second Edition) Amazon Price: $29.95 $18.14 Buy Now(price as of Sep 24, 2014)
Next >> 10 of the Most Bizarre and Horrific Torture Techniques From History