InfoBarrel is a writing platform for non-fiction, reference-based, informative content. Opinions expressed by InfoBarrel writers are their own.
InfoBarrel > Technology > Science > Earth Sciences

Deadly Natural Disasters You Might Face in the United States

For those of you on the coasts, the arrival of hurricane season creates a slight eeriness for several months, like looking over your shoulder in a dark alley. If you live in the central United States, your thoughts turn to those destructive land whirlwinds - tornadoes. Each area of the US faces threats of natural disasters, no matter how boring your daily forecasts. But just how likely are you to face a deadly force of nature, and what would kind of disaster would it be?

Let's start with the smallest US region that includes nine states such as Massachussetts, Maine, and New York. Although the death toll is relatively low per capita, there is a large proportion of  deaths that have been attributed to severe weather and winter storms. Lightning makes up a percentage of the deaths, but remember how that your odds of being struck are about 1 in 3,000[1]. With the amount of snow this area receives each year, it's no wonder Old Man Winter takes such a toll on the population.

Everybody knows midwesterners are a hardy, friendly bunch that work hard at whatever they do, no matter the cost. And heat and drought are the primary, driving factors in that "cost." If you have a home in any stretch of tornado alley (stretching from South Dakota down to Texas), you'll also partake of that risk. Hail, ice storms and river floods all have a history of destroying lives in this region[2]. Even with the heating and cooling technology of today, many midwesterners are caught off guard by the climate extremes. Although natural disaster mortality rates are not as bad as the parts of the West region, high temperatures last longer and leave an enduring mark on agriculture and livestock, thus contributing to the death toll.

Each year, the Atlantic Ocean boils with fluctuating fronts, high winds and ominous storms. For those that live in the southern regions, you understand the risk of hurricanes is always there. The good news for those in cities far from the coast: Most hurricanes lose the majority of their power after hitting land a few miles in, so location definitely factors in; some will always trade ocean scenery for potential risk. Along with these powerful storms, Dixie shares concern with the Northeast of lightning and the Midwest with heat waves[2].

Because of the large area covered, the West is home to all kinds of happenings from Mother Nature. Those on the coast may face more severe threats but not necessarily as often. Volcanoes, earthquakes and other geophysical events can be enormously detrimental to buildings and communities that aren't prepared. And in many places among northern and southern states, freezing temperatures and flooding are a concern.

I highly recommend getting a book for families that showcases the types of disasters you may come across in your area. We can't control when natural disasters are going to strike, but we can control how we prepare for them beforehand. 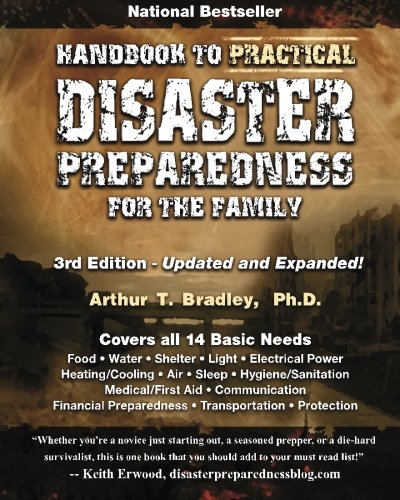 Handbook to Practical Disaster Preparedness for the Family, 3rd EditionAmazon Price: $24.95 $18.52 Buy Now(price as of Jun 12, 2013)
Recommended for anyone with kids who would love to learn more about how to keep safe from natural disasters.
Next >> Weather Facts That Will Impress Your Friends and Might Save Your Life