InfoBarrel is a writing platform for non-fiction, reference-based, informative content. Opinions expressed by InfoBarrel writers are their own.
InfoBarrel > On InfoBarrel

Passive aggression can rear its ugly head anywhere at anytime. Bus drivers, co workers, check out clerks, family, all are capable of dishing out the negative and destructive style of communication we call passive aggressive. These people are often times the most difficult to have true communication with.

Let us define what passive aggression communication is. It helps to have a clear understanding of it in order to recognize it in the moment. It is often elusive and can leave you feeling like you are the one not communicating.

Passive aggression is "A coping mechanism people use when they perceive themselves to be powerless or they fear using their power will lead to negative outcomes." Often passive aggressive people gain a sense of control from others being frustrated around them.

Workplaces are often riddled with this troubling communication style. Often times the hierarchy of many corporations openly discourage direct and respectful communication, which can creates an enviroment where employees and bosses are unable to communicate on a healthy and direct level.

Passive aggression tends to come from a space of insecurity and fear, Direct communication requires confidence and a sense of healthy boundaries.

We should all encourage direct communication with our friends, family and co workers. It is the most direct route to a more sane and respectful world.

The research shows that the western world is among the most unhappy and statistics are beginning to show a general low self esteem level throughout modern societies.

How do we combat it?

If you cannot avoid interaction formalize the communication. Email is a great tool when dealing with someone like this, there is a written document of how they are communicating and how they are putting roadblocks in the way of progress towards to goal or project under way.

Sometimes you cannot avoid them, as in family, and in this case deal the best you can.  Here are a few tips to help.

Be a good listener. Working towards becoming a good listener  is an admirable goal and a great way of dealing with any behavior in your own life and with others you encounter. True listening can put a person instantly at ease, which may help ease the root of insecurity.

Use humor. Travelling through west Africa taught me that humor in any situation makes things easier. It is built into many cultures for a reason, sometimes laughter puts things in perspective, and it has the power to lighten your own load when dealing with difficult relatives.

Remember that people who behave passive aggressively became that way though being taught that probably from their parents. Push through these interactions and keep a positive attitude, and call them on the carpet when the moment arises, I have found that often times with much surprise, the behavior stops while in my presence.  At least for the duration of the interaction.

This is a practice of patience. 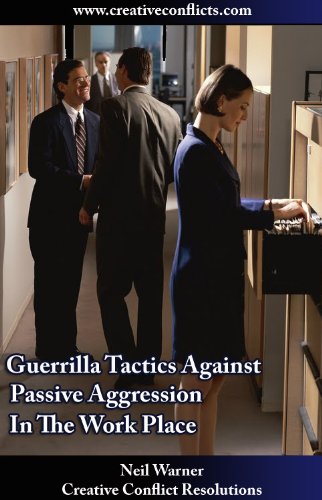 Guerrilla Tactics Against Passive Aggression in the Work Place (The Complete Guide To Passive Aggression Book 6) Amazon Price: Buy Now(price as of May 17, 2015)
Next >> I Could Write a Book About That! - Researching and Writing a Non-fiction Book