Applesauce is my favorite fruit to preserve since it is so easy and inexpensive especially in the fall when most of the apples are harvested. I have included a couple of my favorite recipes.
InfoBarrel is a writing platform for non-fiction, reference-based, informative content. Opinions expressed by InfoBarrel writers are their own.
InfoBarrel > Lifestyle > Food & Drink > Cooking & Mixology > Foods

Applesauce Is Easy To Make

The Sweetest Of Apples

Last month I made 3 different kinds of applesauce using 3 different kinds of apples. The first one was made from Red Delicious, which was quite sweet and tasty but I knew there was better. Next I tried a recipe using Royal Gala Apples, which is another sweet apple, which was very good. The third one I tried was using Ambrosia Apples. The last one is our favorite. Ambrosia Apples are very sweet and large, so you get good value for money when buying these apples, as 1 apple will give you about 1-1/2 cups.

This apple keeps fresh after slicing, therefore no need to add any lemon juice to keep the apples from turning brown. We both liked the taste of this apple, so I purchased 18 of them. For my sauce I used 15 cups of apples, and the other 5 cups were frozen for making apple crisp or pie. Why only 20 cups? Because I like to munch, 6 slices for the pot and 2 for me.

I used a slow cooker because I was making a large batch and I did not have to watch it constantly.  If you are going to peel and core a large amount, then a peeler & slicer/corer is a must have, as it will cut your prep time in half. The peeler does work about 90% of the time, especially if the apples are perfectly round and not too soft, such as the Galas, but If they are misshaped, then you will have to do a little peeling. The slicer works very well. The one I have cuts the fruit into 8 slices, but you can buy one that cuts your fruit into 16 slices.

This year I have decided that I am going to give my friends some homemade applesauce for the upcoming holiday season. I also decided that I should make this batch using 4 or 5 different varieties. When I got to the supermarket and saw that the price of apples had gone up to almost $2.00 per pound, I was only going to buy a small amount. I started out with 2 Ambrosia, 2 Golden Delicious, 2 Fuji, 2 Gala, 2 Honey Crisp, and 2 Pink Lady. Then I came upon the rack that has produce that is marked down by 50%, and they had bags of apples. I ended up with 12 Gala, 7 Fuji, 6 Spartan, 3 Honey Crisp. I kept the 2 Golden I had picked out earlier. 12.5 pound of apples at 83 cents per pound. After cutting them up, I ended up with 27 cups. They are as follows:

As I was cutting up the apples, I was munching at the same time. I had forgotten how very sweet the Spartans were, as well as the Golden Delicious. The Galas are not good to buy when on sale, as they are too ripe and mushy. I did not care for the Fuji or the Honey Crisp. Even with the apples I did not care for this applesauce is very delicious. The next batch I make will include only the Ambrosia, the Golden, and the Spartan. Also, as I was cutting them up, I added about 2 tablespoons of lemon juice to prevent them from browning. As I added more apples to the pot, I stirred them around so the lemon juice was spread around.

Cooking The Sauce On The Stove

Yes, you can. but you have to watch it more often. Adding 1/4 cup liquid to 12 cups of fruit should be plenty, as you will covering the pot. Your mixture will cook faster and be ready to use an immersion blender in about 1 hour or less. For a courser sauce and use a potato masher, you may have to cook 2 hours. After cooking is over and you feel you have to much liquid, then cook with cover off for about 10 minutes.

Everywhere you look on the Internet, you see that about 3 pounds should give you 2 pints of sauce, but I did not get that much. With the apples I purchased I should have gotten 8 pints, but I only ended up with 5. So what gives? Well, I did make a very smooth sauce and that would explain some the difference. My first sauce was made course and I got 5 pints with less apples than I used the 2nd time. Also, Ambrosia apples are a lot firmer and larger, so that could explain some of the difference. 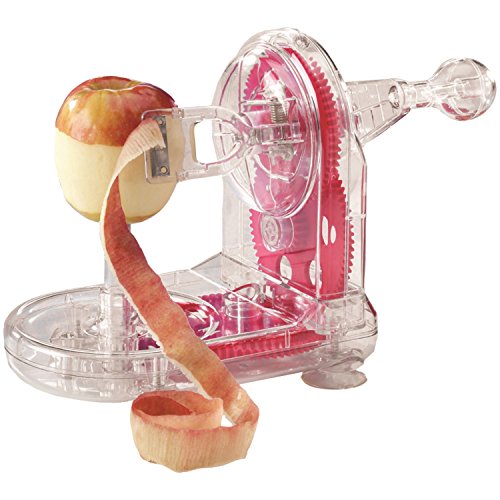 Starfrit 93013 Pro-Apple Peeler with bonus core slicer Amazon Price: $24.95 $14.83 Buy Now(price as of Nov 5, 2016)
I have one similar, but an older model
This one looks very interesting. This may be my next purchase.
Next >> 6 Make-Ahead Lunches That Aren't Pretentious Health Food