I'm a long time participant, reader, and occasional writer of sports. My original goal was to be a marketing research analyst. I attained a degree in Marketing; Business Administration, in the process. I've been involved in sales, and also recruiting, (headhunting) thru the years. I've written for Examiner.com, and Dearborn patch.com (owned by AOL) I'm a big fan of reading or writing personality profiles, or human interest stories. My "heroes" of the writing world are David Halberstam and Gary Smith (of Sports Illustrated) They are the "mountains that one climbs", knowing full well that you'll only reach a certain height - but man were they exhilerating & rewarding to attempt.
InfoBarrel is a writing platform for non-fiction, reference-based, informative content. Opinions expressed by InfoBarrel writers are their own.
InfoBarrel > Sports > Hockey

Gustav Nyquist will return home to the Detroit Red Wings for Thursday night's game and it's none too soon. The Wings have lost the last seven games, and have been spiraling downward in the month of November. Nyquist had been in Grand Rapids, with the Griffins (The AHL Red Wing affiliate) for the first 17 games of their schedule. The last we saw of him he had been instrumental in the victory over the Anaheim Ducks and the near victory over the heavily favored Chicago Blackhawks - the eventual Champions in the 2013 Stanley Cup finals.

Gus we were just getting to know you

Nyquist was a welcome fresh face. He had pizzazz, verve, excitement - was a strong skater with artistic moves and the ability to quickly change directions; a man who played with intelligence. He could score too. A potential fan favorite. The 24 year old transplanted Swede had played only 18 games with the Wings during the end of the  2012 -2013 season.

The playoffs showed that Nyquist had the skills of a sniper, performing under pressure, with poise, against elite opponents. He was highly lauded for his exploits and why not? What more could you ever want in a player, going forward, with the 2013 -2014 campaign?

This is what he does.

Red Wing General Manager Ken Holland obviously had different thoughts. The "Holland Plan"  believed in the mixing of veterans and younger players - with a premium on veterans. But when you're fortunate enough to have a less experiencecd player - one that has the smarts and calm of a 10 year veteran, coupled with speed, dynamism and scoring ability - you do not disregard such a gift.

Post playoffs, Holland (lower right) went on to sign free agents Daniel Alfredsson and Steven Weiss. Veteran Wing Dan Cleary, 35, also a free agent, appeared to have signed with Philadelphia - but he re-signed with Detroit for less money. Hockey's salary cap was beginning to close in on Red Wings, as the summer moved on.

What kind of option was this ?

The one option they had was to send Gustav Nyquist back to Grand Rapids. Nyquist was the only current Red Wing forward who could "go down" without being subject to being on the waiver list - where any NHL could nab him for free.

The waiver rules are very complicated, but it all focuses on national Hockey league seniority. If Nyquist had played two more NHL games he would not be eligible to be sent down - and not available for any NHL team to snag him. He was caught in a highly unusual vise grip. There cannot be many precedents for this in the 10 year salary cap era. Those two games made all the difference in Nyquist's world.

There was no money left on the team salary cap. Why would Ken Holland send Nyquist to Grand Rapids, even though he had outplayed his competition - a move in violation of basic human fairness? Because he could - so he did, and Mr. Holland held on to that dreadful "two game loophole" like a ferocious pitbull's teeth attached to the leg of a hapless player's hockey pants.

It was a very tough thing for him to swallow

Nyquist had a strong preseason - but it wouldn't matter. He would not stand on the ice at Detroit's Joe Louis Arena, in the home opening game, as his name was being announced - a proud, exciting moment for any player - especially an emerging one who had "arrived" and was validated via the Stanley Cup playoffs. The left winger began biding his time, biting his lip and building his case - albeit in Grand Rapids, a place he knows only too well. 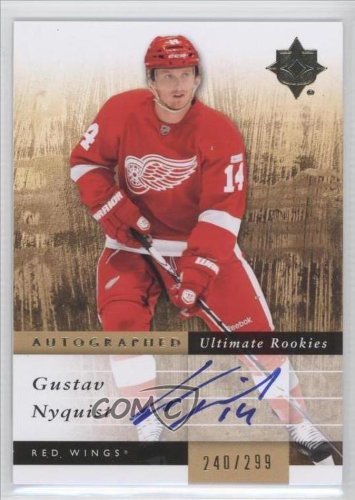 He did an exemplary job at Grand Rapids - probably better than any other player there. As a political pawn, he had to watch other players from the Griffins travel to Detroit to temporarily assist the Red Wings when roster players were out, due to injuries.

This procession included Xavier Ouellet, Adam Almquist, Luke Glendening and even Landon Ferraro - less accomplished players than him, to be certain.

Meanwhile, the Red Wings hit a downturn. In November, seemingly they were losing every game - with practically every one being a one goal loss. They lose in regulation, but more often it's in overtime or in shoot-outs. It matters not. The Wings are in dire need of someone - anyone who can score goals.

Tuesday,  November 19, the Wings lose 2-0 vs Nashville, and they lose again when defenseman Dan DeKeyser succumbs to a shoulder injury. He'll be on the shelf for a few weeks. A most unfortunate occurrence, but Ken Holland and Mike Babcock are not going to miss this chance to bolster their eroding reputations. The door has slightly opened and a crack of sunlight shines thru - it's enough for an escape.

Nyquist is a free man - The chains come off

Suddenly, November 20, Gustav Nyquist is heading home, to Detroit. Dan DeKeyser's salary does not count vs the salary cap while he's on the injured list. There is enough money to accommodate a spot for Nyquist. (Management will eliminate a player before DeKeyser comes back.)

The Holland Plan wasn't working, but what if it had - and had worked to perfection? In a best case scenario, Cleary and other veterans, along with the new free agents, would have provided the goals that were needed. Would Gustav Nyquist ever have played those two games this year - eliminating captivity and opening Pandora's box?

A travesty from the beginning

After watching and listening to Red Wing games, and reading about them for 50 years, this episode goes down as one of the biggest travesties; an invisible black mark on the resumes of Ken Holland and Mike Babcock (pictured, right.).

The fact that two games played - or not played - can unjustly subjugate a player - if management sponsors it. It was diametrically opposed to important team concepts such as goodwill and trust. Those took a backseat to misguided expediency - in a business owned by Mike Ilitch, who is known for loyalty, and whose enterprises all foster family atmospheres for employees.

Gustav Nyquist lost 26% of this NHL hockey season through zero fault or inability of his own. Things like this can cause player agents to recommend departure for greener pastures when free agency occurs. (Three years from now.)

Nyquist quietly awaits his first NHL game of the season tonight, and is literally, fifth page news today, Thursday,  November 21. Detroit sports is all abuzz about the trading of Tiger Prince Fielder. It won't matter a bit to Gustav Nyquist.

For him it will be unbridled joy. His bondage to the two remaining games will soon be in the rear view mirror. It will be a never ending run with the team of a gloried past. 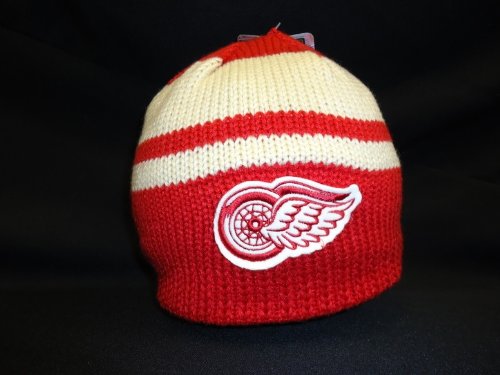 Let's hope that the fans remember who he was

By all means, he should be entering the ice tonight, at Joe Louis Area - on a white horse - not simply held up by his skates. He should be presented with a gold watch at this early part of his career - not at the end. The applause should be thunderous via a standing ovation. Some women folk should be in tears.

This particular story thought of itself as over - but very happily it isn't. Who knew? Thursday evening, November 21, the Detroit Red Wings finally won a game. (first time in eight games.) 4-3, over the Carolina Hurricanes. Whoever you are, wherever you are, if you've read this far, you should be happy, smiling and feel that warm glow.

How could it have been scripted that Gustav Nyquist would score the game's first goal - at 17 seconds of the first period! Indeed, who knew he would also score in the last minutes of the game, on a breakaway, to guarantee victory?

Overall it was an outstanding game, and Nyquist was its most outstanding player. It's called homeostasis; the restoring of the true balance and order of things - or is it merely that hockey gods truly exist, and that Gustav Nyquist really and truly was allowed to be that man who rode into Joe Louis Arena on the white horse?