Shrawan440
InfoBarrel is a writing platform for non-fiction, reference-based, informative content. Opinions expressed by InfoBarrel writers are their own.
InfoBarrel > Health > Alternative Medicine

Inhibitory systemic antibodies are the simplest among the others that will bend to substances reducing them to become ineffective or inactivate them. In crude form these types of antibodies  consist of hyperimmune serums which are used to alleviate the symptoms of bites of a number of poisonous animals. An example of this type antibody is an antivenum produced in horses for the treatment of snake bite. Hyperimmune serum derived from patients with the disease can also be used prophylactically after exposure to different types of pathogenic viruses and therefore to treat different pathogenic viral condition like hepatitis B, AIDS, hyperimmune serum is used.

The second class of therapeutic antibodies is those, which capable of binding bioactive molecules and thereby reducing their effect in vivo. They are monoclonal antibodies with a number of targets. One of the major targets for this approach is systemic cytokines which are responsible for the propagation of disease like arthritis. Monoclonal antibodies when linked with the surface markers can also be used to reduce the number of specific cell types in vivo. These surface markers bound monoclonal antibodies attack the immune system causing the cell to be cleared from the circulation. Chimeric (which is derived from two sources mouse and human) mouse/human monoclonal antibody consists of two parts. First is mouse variable region and the second is a human constant region. This human constant region is specific to the beta cell marker CD20 and therefore this type of antibody is used for the treatment of systemic lupus erythematous, which is characterized by the formation of aberrant beta cells. These aberrant beta cells secret auto antibodies, which cause a number of immune problems. 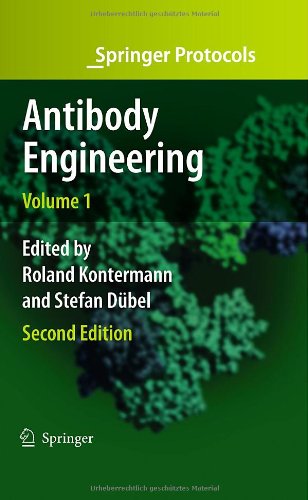 Antibody Engineering Volume 1 (Springer Protocols) Amazon Price: $329.00 $179.41 Buy Now(price as of Nov 12, 2014)
Best Book for antibody engineers. This book is about biochemical techniques and tools that can be used to engineer and design antibodies for different purpose.

There are lots of therapeutic inhibitory antibodies available and all are involved in downregulation of the cellular system by occupying the antigen binding sites of the receptor thus preventing the ligand binding. They may block the binding of different signals like hormones, cytokines and other cellular messenger. Because of these properties agonistic monoclonal antibodies are used for the management of some hormone dependent tumors such as breast cancer and also in the suppression of the immune system to prevent rejection after transplantation.

Therapeutic antibodies need to be carefully engineered and designed to make them effective in treatments. They should not appear as foreign to immune system otherwise they will be destroyed and cleared by the body’s immune system. Murine antibody derived from mouse can be engineered with human antibody so as to retain murine binding site and the constant region replaced by the counterpart of human antibody. So that they will not be recognized as foreign particles by human immune system and still they will have an effective binding capacity. Normal antibodies may remain up to 6 weeks in the circulation while engineered may survive much shorter time. This is because engineered antibodies still have a degree of antibody which is exposed to the human immune system. Therefore each engineered therapeutic antibody has a specific but different half life in vivo, which is of great importance in establishing baseline doses. Most of the engineered therapeutic antibodies have a certain degree of side effects and therefore they will be used only where the benefits outweigh the problem expected to be encountered.