It can be a difficult decision whether or not to buy a dog with young children in the family.  But then, having decided to go ahead, when it comes to choosing the breed of dog there are just so many. There are actually about 340 breeds recognized by the Fédération Cynologique Internationale (FCI), and each breed has a different appearance, temperament, characteristics and behavior. The White Swiss Shepherd, which was popularized by Walt Disney’s 2008 animated film Bolt, is one breed which has perhaps caught the attention of the public. The pure white appearance is obviously one of the White Shepherd’s defining features but it also has a notable mellow and sensitive personality too, which makes it an excellent breed for young children.

Our short-haired White Swiss Shepherd standing in a perfect competition stance. He is a little over 1 years old pictured here.

You won’t find this dog breed featured in any “Top 10 Dog Breeds for Children” but its popular cousin, the German Shepherd Dog, often makes that list. Like the German Shepherd, the White Shepherd is a herding dog. It has a strong protective instinct with its family and will be a loyal companion dog. The breed is described as tranquil and confident yet eager to learn and play. The best way to socialize the breed is to start when they are a puppy, exposing the dog to small children. In this way both the puppy and child familiarize themselves with one another and grow to understand one another. This has been quite clearly demonstrated within our own family when we brought our male White Shepherd into our home before our first born arrived. Having grown up with one another they share a special bond. Our female White Shepherd on the other hand was brought into our home at an older age, being raised in another childless family. She doesn’t show as much tolerance and interest in our children as the male does. Our female White Shepherd enjoys the attention of the adults and prefers to keep out of the way of rampaging toddlers.

The Swiss White also displays excellent behavior towards other house pets that you may already have or introduce to your home at a later stage. For example both our Swiss Whites were easily socialized with our family cat. They are very eager to play with one another.

The White Shepherd, which is a descendant of the German Shepherd, is known as a medium-sized muscular breed. They are longer than they are tall and have erect ears. These dogs have a double coat which is pure white and weather-resistant, varying in length from short to long. Due to the breed’s pure white look, people often label the dog as an albino and I have had people call my dogs white Alsatians. I always have to correct them - people are stunned by this mysterious bolt of white as we pass by on our runs. Being misunderstood, the White Shepherd has a particularly interesting history; the ‘white dog’ was virtually wiped out of Europe in the 1960’s. In terms of breeding standards, it is preferable, if you want to participate in dog shows, that the coat is white, not cream in color and that the nose is predominantly black. Black paws and claws are even more desirable characteristics but not essential. The dog’s tail is set low and is naturally carried in a slight curve like a sabre whilst trotting and running. The White Shepherd is not a bulky dog and has a smooth elegant coat. Male dogs can reach a height of 24 - 26½" (60 - 66cm) and weigh 40kg and females are a fraction smaller with a height of 22 - 24½"(55 - 61cm) and weighing around 35kg. The expected lifespan of this breed is 12-14 years.[1]

This breed of dog is very loyal to its family but will remain reserved towards strangers until the stranger has proven to be friendly. They are very alert and will watch your every move. The breed is always ready to spend time with the family and to play. The White Shepherd is a natural herding dog and can be trained easily by using treats or a clicker. It can be considered one of the most intelligent breeds and thus needs plenty of stimulation. Activities such as chasing a ball, frisbee, outdoor running, obedience dog shows and home dog toys are very welcome. The breed’s intelligence has made them excellent for use as a sheepdog, guard dog, guide dog for the blind, sniffer dog for drugs and in search and rescue activities.[2] Our two White Shepherds take commands in both English and German (their dog breeder spoke in German), with hand signalling being the easiest means to communicate.

The most important reason why my wife and I chose this breed of dog was that, through research, we found it had many excellent reviews for being good with young children. My wife was pregnant when we acquired our young White Shepherd puppy and we wanted our newborn to be socialized with him. When our son was born, the White Shepherd puppy was around 6 months old and still had a long way to grow to reach full size. This was the ideal situation for us for I, as the dog’s handler, had enough time to give proper training in a calm consistent way before our baby arrived. We introduced our White Shepherd puppy to our baby son the day we came back from the hospital with him. The dog immediately accepted and bonded with our son. The White Shepherd’s very strong protective instinct for its family became clear when he would guard the door to my son’s room and keep watch over the house from a strategic vantage point. Months later when my son was barely able to sit, he would grab our White Shepherd’s head and pull it towards him for ‘kisses’. With such tolerance for nonsense and ample hair pulling never once did I see our dog become aggressive or bite our son. The benefit for my son, now aged 2, is that he is very confident with all big dogs and is not in the least scared of barking dogs.

The puppyhood training I gave back when my son was very young was very important because the breed has a predisposition to become a working dog and needs to have a job and task in life. These working dogs continually need to be shown guidance and have dog pack behavior whereby I, as the owner, become the pack leader.[2] The dog pack behavior could really be seen once we  got our second White Shepherd, a female, and I took them for a run. The White Shepherds crave strenuous activity such as running and it satisfies their migration instinct. While I trained weekly for half marathons the dogs adored the challenge and would run alongside me, one on either leash. After a 10km run both would be nicely tired out and very happy since they felt that they had a sense of purpose. While running on the beach promenade, or in any other public places, it is important to practice discipline and make the dogs heel beside or run behind. The White Shepherd is instinctively following the pack leader therefore the human leads the way. 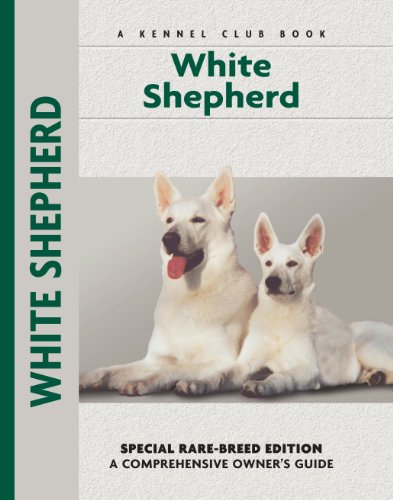 White Shepherd (Comprehensive Owner's Guide) Amazon Price: Buy Now(price as of Oct 7, 2016)
Get to know everything about this amazing dog breed!

White Shepherds are constantly shedding hair and vacuuming your home to free it of dog hair is almost a daily chore. They can be brushed daily to help reduce the shedding. About every 6 months the White Shepherd will seasonally shed its coat heavily and clumps of white hair can be pulled out of the coat. A new coat will have grown under the old coat. I would recommend giving a bath only when necessary as bathing can cause skin irritation and oil depletion. Clean the inside of the ears regularly with a solution of half water half vinegar. Dirt tends to collect inside the ears which the Shepherd finds difficult to clean. The claws must be clipped regularly; we have this carried out by the veterinarian.

The White Shepherd can become restless and destructive if under-exercised or not mentally challenged. It is best to give the dog a job or a purpose such as fetching your slippers or joining you on training runs. They also tend to bark a lot if not properly controlled which could disturb your neighbors.

Apart from this, we will never regret our decision to choose White Shepherds for our young children, their bonding, protection and loyalty has completed our family and added so much to our home environment.