Dog Breeds of the World - The Scottish Deerhound

The Scottish Deerhound is believed to have evolved from the British greyhound although some sources say he is descended from the hounds belonging to the Picts. At one time the Scottish deerhound and the Irish wolfhound were one and the same but by the sixteenth and seventeenth centuries, the deerhound had developed into a more specialised breed, becoming stronger and more solid and better suited to deer-hunting.

The deerhound has great courage and a gentle dignity. He is perfectly suited to his role having the strength and speed to bring down Scottish deer (some of which weigh around 250 pounds). Along with his excellent vision, he has a strong sense of smell. Mostly he worked alone or in pairs. When out in the forests, after releasing the dogs as close as possible to the deer, the dogs ran the deer to exhaustion. If the deer had been shot and wounded, they would pull the animal down. It would then be packed home on the back of a sturdy Highland pony.

Like the whippet, saluki, borzoi and Afghan hound, the Scottish deerhound is a sight hound. It has keen eyesight and is a fast, powerful hunter. Its previous names included 'Scotch Greyhound', 'Rough Greyhound', 'Irish Wolf Dog' and 'Highland Deerhound'. He has also been called the 'Royal Dog of Scotland'. Queen Victoria owned one of the breed as did Sir Walter Scott. Landseer gives it a grace and dignity in his paintings and drawings. 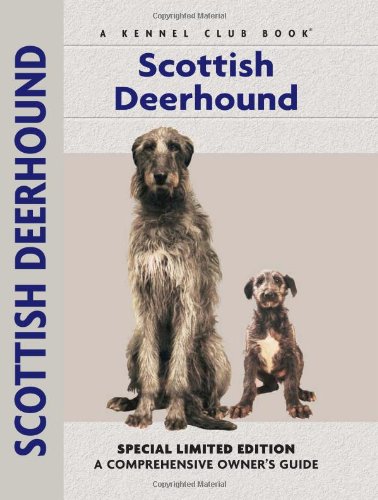 Scottish Deerhound (Comprehensive Owner's Guide)Amazon Price: $19.95 $13.95 Buy Now(price as of Oct 6, 2013)
This comprehensive guide discusses many aspects to help guide you through choosing and caring for a Scottish deerhound.

The Scottish deerhound was highly regarded and could only be owned by those possessing the rank of earl or above. Ownership exclusivity has threatened his very existence from time to time. Hunting with guns, fencing of once open lands and the decline and fall of the Scottish clan system saw his numbers drop dramatically. The same factors were responsible for the fall in the numbers of large quarry which also affected the number of large dogs kept on estates. By 1769, numbers and quality were very low and it took until 1825 before two brothers set out to rejuvenate the breed.

Around the mid 1800s he appeared in the United States where he was used to hunt coyotes, wolves and rabbits. The breed was recognised by the American Kennel Club in 1886.

The Scottish deerhound needs to be with his family rather than in a kennel situation. Although quiet and dignified he has great determination and courage when needed. He is easily trained and amenable. He displays great loyalty and devotion to his master. He looks rather like a very large, more substantial, rough-coated greyhound. Depending on sex and age, heights range from 28 to 32 inches and weight from 75 to 110 pounds. 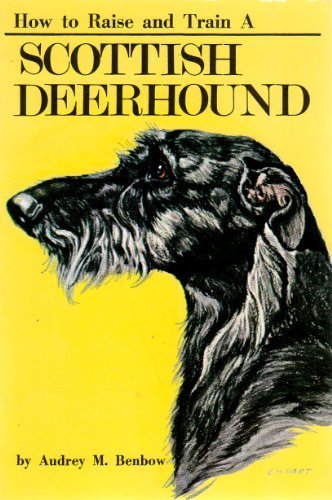 Sight hounds have a long nose and pointed muzzle. Like the Afghan, this breed has a slightly Roman profile. The head is carried high. The glossy ears are small, soft and dark. The eyes are dark with black rims. The neck is quite long although it may be camouflaged by the mane. The neck needs to be strong enough to hold a deer. It is well-arched. The body is long and the flank tucked up. The deep chest and girth allows plenty of room for the heart and lungs. There is good breadth across the hips. The loins are well arched with drooping but powerful hind quarters. The compact feet have well arched toes and strong nails. The long tail reaches almost to the ground. It is well covered with hair, carried low and slightly curved.

The coat is harsh and wiry, 3 to 4 inches in length with the belly and chest hair much softer. The hair on the head is also soft. The coat is thick and ragged. There is a slight fringe on the inside of the legs. Brushing several times a week will take care of his coat as they shed very little. The most popular colour is a dark blue-grey. Shades of fawn and grey and brindle also occur often with black ears and muzzles. In the show ring the only white allowed is a white chest, toes and/or tip of stern.

The Scottish deerhound has a true, easy action. He is very fast. This breed is easy going and devoted. They are usually too friendly to make a good guard dog although their size would be intimidating. His inherent instinct is to chase anything that runs away from him so don't leave him off the leash when out of doors. If something distracts him, he will be deaf to all pleas and threats. He isn't a particularly active dog but is happiest with plenty of room and lots of exercise. Some can be wilful and slow to obey.

Being a big breed, it is best to feed him several small feeds. Restrict his exercise immediately after feeding and you should avoid any problems with bloat.

If you have room for a big dog and can give him the exercise he needs, the Scottish deerhound could be a good choice. He is an affectionate, loyal companion and will become a great friend.