This is part 2 of Dr. John Henrik Clarke’s epic biography. Begin with part 1 of his biography, if you missed it.

Through his studies, Dr. Clarke learned Afrikans didn’t originally define themselves by continent but more so by regions. Afrika, as a continent, began to be defined by foreigners. In North Afrika, the Romans had a province called Afrique which then became Afrika. The history, both known and hidden, of the land where time began has been a primary focus of Dr. Clarke’s scholarship throughout his long career.

The concept of social order, the concept of an organized society came out of Nile Valley civilization before there was any other society that has been known to man, functioning in any other place in the world. The significance of Nile Valley civilization is it was that civilization that set a standard of performance untouched by the other civilizations of the world. It's simply amazing how many people are reluctant to give credit to an Afrikan for a creation that happened in Afrika. They also forget that the Nile Valley stretches 4,000 miles into the physical body of Afrika; it was the world’s first cultural highway.

For centuries, Eurocentric scholars had rejected the idea that the mighty Egyptian Empire was in fact created and maintained by the native Afrikans who dwelled on the continent long before foreign invaders arrived. The concept that Western Civilization was the product of non-European intelligence, imagination, spirituality, and technology was unacceptable, both psychologically and politically. 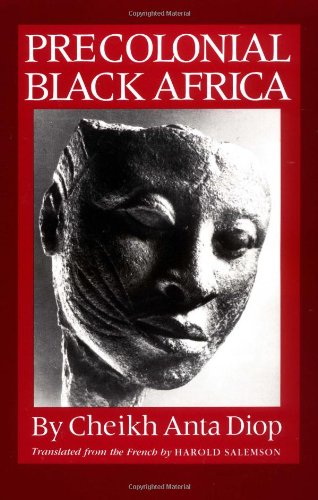 Precolonial Black Africa Amazon Price: $16.95 $9.61 Buy Now(price as of Jun 24, 2016)
With this profound and controversial book, Dr. Cheikh Anta Diop takes a step out of ancient Khemet (aka Egypt) to explore precolonial civilization in his native West Afrika. In it, he clearly substantiates that the history of this region can be traced back thousands of years, military regiments were well armored, there was a thoroughly in-depth university curriculum intact, and he even writes of the likelihood of pre-Columbian exploration to the Americas.

A brilliant Senegalese scholar and scientist would shake, and many say, topple the very foundation of Eurocentric conventional wisdom. His name was Cheikh Anta Diop. His research was brought to the attention of the English speaking world through the efforts of his longtime colleague and friend, John Henrik Clarke. Dr. Clarke asked Dr. Diop why his books had never been published in the United States. Dr. Diop said it was because no publisher is interested in publishing his books and it took him seven years to interest a publisher in bringing his books to market.

Dr. Diop’s disciples commonly referred to him as “the Pharaoh of the Upper Nile” because of his profound knowledge on this part of the world. He taught them that they “must be strong enough and serene enough to see the historical facts and to interpret them. We can all be impassioned, but that is not how we will solve the very complex problems of humanity. The domination that we suffer from and that I have suffered from myself, our domination of other races preceded it. For 4,000 years native Afrikans had an imperialism. All of Western Asia was under the domination of Blacks and, at that time, no one would have ever dreamt the situation could be reversed. This is why the study of history gives us the serenity required to appreciate the facts as they are.”

In 1974, Dr. Diop would challenge the world on the concept of Egypt not being anything other than an Afrikan state. In the conference on the peopling of Egypt, leading scholars of the world met and debated. Most of them wanted to put the origins of Egypt outside of Afrika. Dr. Diop and his protege, Theophile Obenga, placed Egypt within the context of Afrika’s totality. Dr. Diop proved to be more than a historian. He was a scientist, a paleontologist, and he demonstrated that if he could get the pigment from some of the mummies he could substantiate their African origins. All of the European conferees attended disagreed with his findings. But when it was all over they had to admit that Dr. Diop and Mr. Obenga came prepared to support their case. At that point, European scientists began to close the door to the research of Dr. Diop.

From the first Dynasty to the invasion of the Nile Valley was the first golden age. From the third Dynasty came the great multi-genius, Imhotep, the real father of medicine who lived 1800 years before the Greek, Hippocrates, was called the father of medicine. When we read the biography of Hippocrates, he proclaims himself to be the child of Imhotep. From the 18th Dynasty came the world’s great social reformer and perhaps one of the world’s first deities, Akhenaten. He thought so much of life, he wouldn’t crush a flower and he outlawed warfare.

Spirituality was a part of the total life of the people and the Afrikans were very religious before the coming of the Europeans. The step pyramids were originally built for access to the temple at the top of it so that Afrikans could go to pray. This relates not just to the glorification of a Pharaoh but the spiritual outpouring of a people and is what made the civilization of the Nile so great. At the same time Egypt was in it’s 24th Dynasty, Europe was just emerging from it’s pre-literate past.

The first show of European intelligence was a book titled, “The Iliad” and it’s sequel “The Odyssey” by Homer that were produced around 850 B.C. Where is Egypt in 850 B.C.? Egypt is old, tired, and has gone through 24 dynasties. It’s on the eve of it’s last great dynasty that will come from the Pharaoh’s in the South, compare that with the European who has just written a book of folklore.

Just south of Egypt lies another highly evolved black civilization, the Nubians. Their civilization thrived for some 3,000 years. Dr. Clarke designated the 25th Dynasty as the one dynasty from the South that moved North to tell their cousins, the Egyptians, how to rule a nation one more time. In the great show of history, this was Africa’s last walk in the sun. That walk lasted 10,000 years and it was coming to an end. Europe is just being born. As a matter of fact, the very word “Europe” wasn’t even being used.