This is part 3 of Dr. John Henrik Clarke’s epic biography. Begin with part 1 of his biography, if you missed it.

Dr. Clarke was drafted into the army on September 1941. He considered himself one of the best clerks and one of the worst soldiers the army ever had. He couldn’t shoot, he didn’t like the hot sun, he didn’t like to go on those all night trips, but he was a wizard at administration. He made sure his squad received what was due them as soldiers and men. After his return from the army, it was not so much as finding himself again as a Pan-Afrikanist but redefining himself as a Pan-Afrikanist. Remember, Afrikans living in America had participated in a war that they were cynical about in the first place. They participated in the war on a Jim Crow basis and after getting out of that debacle there wasn’t the employment they had hoped would become available. He began to think more and more about the fact that Afrikan people would have to depend on themselves.

He looked to the fact that Afrikans number 1 billion strong on the face of the earth. If they joined forces and accomplished one thing in unison, even if it was wrong, it might alter the world. 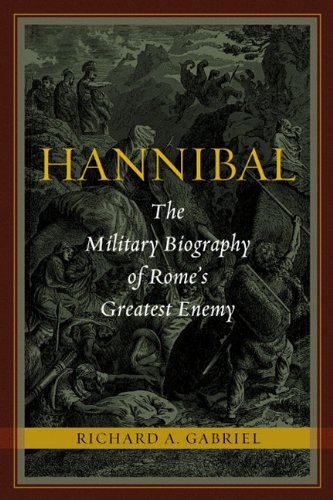 Hannibal: The Military Biography of Rome's Greatest EnemyAmazon Price: $34.95 $21.00 Buy Now(price as of Jan 27, 2014)
This intriguing overview of the life of this military genius and brilliant tactician includes Hannibal's childhood, his exploits in Italy, and new information that has been suppressed and ignored by earlier historians.

Afrika has always been and still is the world’s richest continent. She has always had things other people wanted, couldn’t do without, and didn’t want to pay for. Therefore, there’s always been an excuse to invade Afrika. Alexander’s invasion was the first purely European invasion of the continent. Everything that had happened in Egypt and in Afrika before 332 B.C. was something that no European had anything to do with. Now we see the beginning of European occupation, we see it as aggression, not bringing civilization but destroying civilization that it didn’t understand, which still occurs today.

The uninvited arrival of European armies in the Upper Nile Valley, signals the beginning of the end for the highest civilization the world had ever known. The conquerors, quite literally, changed the complexion of the continent into a mulatto population that many people continue to misinterpret as white. With each one of these invaders came the bastardization of the population based on the fact that, for the sake of pleasure, the foreign soldier headed for the female population at a time when the male population has been defeated in war. The Greek's rule didn’t last that long before they were challenged by an ambitious and well-dressed bunch of thugs across the ocean who were not very educated, but who could fight like hell. The Romans began to have ambitions for the trade in the Mediterranean.

Carthage, a powerful state populated by Moors in North Afrika, had imperial ambitions of it’s own. By the 3rd Century B.C., it’s forces had crossed the Mediterranean and established a large province in Spain. The military commander of Carthage had apprehensions about his Roman neighbors and warned his son to keep a watchful eye. Hannibal’s father, Hamilcar Barca, pointed across the ocean and remarked there’s some evil people over there, we’d better bring the war to them before they bring it to us. He never forgot his father’s words. Hannibal is only 26 years old when he takes charge of the army. He launches an audacious military adventure leading his men and their elephants over the Pyrenees Mountains into France, then pointing them across the Alps, boldly, toward Rome itself. Heavy casualties, overextended supply lines, and defection of allies drive Hannibal off the soil of Southern Europe forcing him to retreat back home to Carthage.

The Roman presence in North Afrika is going to force into being one of the great events in human history: Roman taxation. Roman oppression, would cause people to turn to new gods and question old gods. One of them would be a story about a god who comes forth to rescue them. The Romans would draw from Afrikan folklore: the story of the child in the manger. Later, in retrospect, he was referred to as Jesus Christ. You can argue about the skin color of Christ if you like, but this issue can be settled very quickly. Was he a Roman? No. Was he a Greek? No. These were the only European types in that part of the world at the time. So, if Christ was not Roman or Greek, he was one of those other people and all those other people were non-European and non-White. He came from the other people.

During that time of Roman dominance, Afrikans hold high military and administrative posts in the empire. The Romans and the Greeks had no color prejudice comparable to the kind of prejudice Afrikans would know later in history. Otherwise, why would three Afrikans become Emperors of Rome? Why would there be three Afrikan Popes? Finally, Constantine decided to make Christianity the religion of the whole of the Roman Empire. Now we’re coming to the critical period when the Roman domination of the church so corrupted the church, Afrikans became disenchanted with the Roman interpretation of Christianity.

Constantine calls a council of bishops and priests at a place called Nice for the Nicene Conference. It’s at this conference that the European created a European concept of Christianity. It was at this conference that they began to take the Afrikan saints out of the literature of Christianity. Now the corruption had begun in full force. The physical concept of Jesus Christ didn’t exist. How did it come into existence? The Pope commissioned it to come into existence. Using one of his relatives as models, Michelangelo’s painting, The Creation of Adam, is one of the finest pieces of propaganda ever projected in history. It has changed the minds of millions of people as who is supposed to represent god, no matter who he or she is. As an aside, Dr. Clarke had no problem with the “she”.

Spirituality is a way of accepting the fact that there is a spiritual force in the universe larger than all of mankind. But someone had to come along and invent a word called “god”, then someone had to invent another god and say, “My god is better than your god.” Along those lines, someone came along and invented faith and people began to proclaim, “My faith is the true faith.” Religion is the organization of spirituality into something that became the handmaiden of conquerors. Nearly all religions were brought to people and were imposed upon them by conquerors which was then used as the framework to control their minds.

Dr. Clarke’s main point is, if you are the child of God and God is a part of you, then in your imagination, God is supposed to look like you. When you accept a picture of the deity assigned to you by other people, you become the spiritual prisoners of that other people. He makes the case that many Afrikans became Roman citizens. Just like many of their descendants living in America today consider themselves as American citizens and can’t fathom any relation to their original homeland, which doesn't include Afrika only but the entire planet. There were Afrikans in antiquity who displayed that same kind of split personality silliness not knowing where their ethnic identity belonged.