This is part 6 of Dr. John Henrik Clarke’s epic biography. Begin with part 1 of his biography, if you missed it.

The significance of Ghana’s independence at that time is that it gave spirit to the whole of the African world. It was a major impact on Black America because it came at a time when the Civil Rights movement was reaching a crescendo. President Nkrumah’s first vision of Pan-Africanism was the physical unification of Africans. He believed Ghana’s freedom won’t mean anything until the rest of Africa is free. So, the spirit of Ghanaian independence would create a light of hope in the rest of Africa. It’s what Kwame Nkrumah was trying to build. This is also where the intelligent services of the United States, England, and France had to destroy to keep the example of Ghana to keep them from emerging.

What went wrong is our misunderstanding of what a state consists of and the responsibility of holding one together, as well as our dependence on our colonial masters more than we anticipated. We who had longed so much for power, when close enough to touch it, hadn’t decided what we would do with it once we achieved it. Dr. Clarke was involved in the Anti-Poverty program in Harlem when Nkrumah came to speak to the United Nations. He took a picture in his possession of Nkrumah, showed to his colleagues, and said, “Look! Here’s a Black man, head of a nation speaking to the world. He has coarse, curly hair. He didn’t apologize for it. He said, ‘Here I am. African, Black, bold, powerful, and head of a nation! I have something to say to you and this is what I have to say...’”

The passive resistance of Gandhi, and we should understand this, was a strategy. The passive resistance of the Civil Rights Movement was sold as a way of life. A strategy is never a way of life. A strategy is something you use in the same way you use an orange, when the juice is gone you throw it in the garbage. Mahatma Gandhi was an East Indian nationalist, but a very skillful politician, and he always had a violent alternative waiting in the wings just in case his non-violence didn’t work.

Dr. Clarke believed Dr. Martin Luther King was the spiritual leader of the Civil Rights Movement and probably one of the finest theologians we’ve produced in recent years. He was a dreamer, and yet, he was a committed man to struggle who made great sacrifices within that struggle. Dr. Clarke had some strong disagreements with Dr. King. He never thought Africans living in America should be locked into the concept of nonviolence as a way of life; he was perfectly willing to use it as a strategy. However, we should be slow in criticizing Dr. Martin Luther King because he was brave enough to put his life on the line for what he believed. We’re still here talking, that’s proof enough of his bravery over ours.

According to Dr. Clarke, the march in Washington was just that: It wasn’t a march on Washington, it was a march in Washington. He didn’t know of any sweeping achievements that came out of it. He felt it was a great ceremony and was hard pressed to identify the substance. He believes we have gotten enough mileage out of marching. It was a great ceremony and a great rehearsal for a show we didn’t put on the road. For a time, we had the attention of the world and there were people, though they hated our guts, who were willing to make concessions with us based on the fact that we were ready to handle power. We made too many speeches and didn’t do the necessary work, the unglamourous, off-camera work, that would have made it possible. Our great mistake was promoting ceremony that lacked substance. 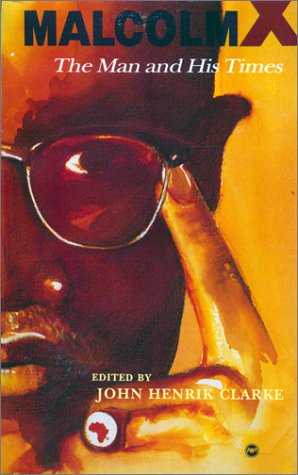 There was a voice, loud, clear, and analytical; a voice which we fought to keep from hearing. It was the voice of big, bad Malcolm X who had both the national and the international message. Dr. Clarke met Malcolm X in 1958 at the World Trade Show building and knew him from that period until his assassination on February 21, 1965. Sometimes, he and Malcolm saw each other on a daily basis. Malcolm’s first word’s to Dr. Clarke was, “I bet you’re a swine eater”. Dr. Clarke admitted to having paid some joyful visits to pork chops and other parts of the pig and said, “You know, Malcolm, if it wasn’t for the pig, you and I wouldn’t be here arguing about the pig because some of us would be gone. We would’ve starved to death!”

Many times when Malcolm prefaced his speeches with the words, “The Honorable Elijah Muhammad teaches us...”, Malcolm X was teaching his own lessons over and beyond anything The Honorable Elijah Muhammad ever thought to teach. The Arabs and other powerful groups within Islam really wanted Malcolm on their side. There was a serious attempt by the Arabs to turn Malcolm against Elijah Muhammad in order to establish a second Islamic group based on what they considered to be orthodox Islam. They offered Malcolm $3.5 million in exchange for his loyalty to their cause, but he turned them down.

Dr. Clarke believes Malcolm’s development as a Pan-Africanist came a little later in his life. In the final analysis, he was as good a Pan-Africanist as any of the rest. Malcolm X laid down a threat to the colonial powers of the world. Dr. Clarke didn’t believe Malcolm X’s assassination was a local, American situation, it was much larger in scope. Nor did he believe Louis Farrakhan had anything directly to do with his murder, but he did believe Farrakhan was guilty in creating the attitude and the atmosphere that led to his murder. Without Farrakhan, Dr. Clarke felt Malcolm X would have still been assassinated. Dr. Clarke and Malcolm were friends from the day they met until Malcolm’s untimely death.

Dr. Clarke received word of his death while in Connecticut on a speaking junket. Before going to give his speech, he stopped to visit acquaintances in a Jewish home. When he heard the grim news, someone made a dismissive comment saying, “After all, he was anti-semitic.” Dr. Clarke knew Malcolm well enough to know he didn’t hate anyone, he hated certain thing people did, but he wasn’t a hater at all. This person spoke as though they had the right to tell us who should and who shouldn’t be our hero. He went into their bathroom and cried like a child for 15 minutes. He came out partly composed, made the speech that night he was asked to make, left for home, and tried to deal with the reality of the situation.

To him, Malcolm X was not gone and he still wasn’t gone in his imagination. The entire year after his death, he had the feeling he and Malcolm were having their usual conversation where he would ask Malcolm how could he contribute to the cause of African nationalism. He sensed, intuitively, during those times that Malcolm was encouraging him to do his best work. Dr. Clarke was a good teacher before the death of Malcolm X. He was a better teacher and a better human being after his death because he knew being a good classroom teacher was his best work.