You know what sounds like a good idea? Taking one of the popular and entertaining Dragonball Z fighting games and placing it on the Kinect. Then making the game in the first person so you can feel like your favorite Z fighter. Well, they have finally realized this and made it happen. I know, it makes you just want to scream "Shut up and take my money!"

I am quite frankly surprised that the kinect has lasted this long without Dragonball Z wiggling its way in. I am surprised it was not a launch title!

As a fan of the Dragonball Z fighting games and Dragonball Z in general, I all but ran out of the house in my sleep clothes when I found out something like this existed.

Then I played the game.

You know how there are those titles that work really well on the kinect, like Fruit Ninja? Then there are those games that don't work quite so well, like every kinect game with a plot?

So What Is Good?

It's best to start with the good in this game. There is always that nostalgia factor with Dragonball Z games. It's really pleasing to see that this game goes all the way from the start to the end of Dragonball Z unlike some games that like to crap out after the Cell Saga. This game even added in the Bardock special. Which is no big thing as it is only adds about twenty minutes of extra content, but it's still a nice thought.

Dragonball Z has a massive amount of characters as well, about 80 in total.

Also, the game is beautiful. Just about every Dragonball Z game has be done in cell shading and I am glad to see that the game companies are firmly sticking with the 'If it ain't broke, don't fix it' mantra when it comes to the art. Cell shading was born for Dragonball Z games!

So What Is Wrong With It?

When you play any game of the kinect you can expect two things to happen. One, you can expect to look so silly and two, you can expect to get tired really quick. The first one usually has some method to the madness. Maybe you have to jump to make your character jump or slash with your hands at invisible fruit.

In Dragonball Z for the Kinect, you kind of end up looking like a frantic monkey preparing to fling excrement at the television. I would say the kinect registers your movements 60 percent of the time. The other 40 percent is spent flailing trying to get the move to work.

It kind of seems like the developers gave up half way in creating the game and decided if they could not make a great game, they would make you look incredibly stupid. Make you look more stupid then rightfully should be possible even for the Kinect.

In the process of looking like a fool, you also get tired very quickly. After about one fight you'll be sweating and ready to stop playing. Which is too bad, because it is a really long game. I always thought the best fitness game for nerd would be a Dragonball Z game and so it is. Too bad the game is so frustratingly broken you will not want to stick with it.

If any potential game developers are reading, I just gave you a million dollar idea. Make me a Dragonball Z fitness game.

Anyway, the voice acting is good but fans of the series will notice that something is a bit off. Many, in fact, nearly all of the original voice cast from the series and other games are absent from this one. The voice acting is not bad by any means, but it is still a tick against this game.

Sure there is a good amount of novelty from doing the Kamehameha pose and having it actually fire one, but that is about all. It is one of the few things they did right. However, many of the power attacks you remember from the series are not preformed in the game like they are in the series, which is devastatingly sad. Fans of the series know how to perform their favorite attacks, but are disappointed when they do not make go in the game.Instead the screen tells them to do something completely unrelated to do the move they are trying to do.

If you really want to give it a try, renting it is the best option.

Thankfully though, as renting games is practically dead, the game is only $39.99 and probably cheaper as people will have traded it in. Perhaps some day when the motion sensing technology advances, or dies and is replaced by something better, a Dragonball Z game that you can play with your body will be possible.

So in conclusion, this game is not really worth a buy unless you think you can sit through repetitive battles where the controls only work about half the time.

Alternatively, one could purchase this game, make their friendly play it, film it, and put it on Youtube! You could probably make a fair bit of money off of their embarrassment. Especially if your friends get mad and start destroying your living room.

Other than that, Dragonball Z fans will just have to sit tight until game consoles can scan your body into the game and have you fight Perfect Cell yourself.

That is the most awesome pipe dream ever. 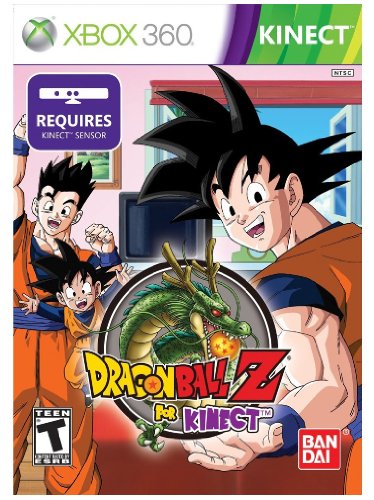