Dream Phone: The Silliest Board Game Ever

You remember this from your childhood: you are having a sleepover. It's getting late and you have already worn out too many rounds of truth or dare and Mad Libs for you to handle. So, little Suzy in the corner says "Hey, why don't we play Dream Phone"? You get all excited and wonder who your secret crush is as you play this stupid, stupid game. Have you ever wondered why so many board games geared towards girls in the late 80s and early 90s were so gender specific? It actually is kind of morally degrading that we had Dream Phone, Mall Madness, and Pretty Pretty Princess as the big sellers back in the day. But then again, what else do little girls think about other than boys, shopping, and being a princess? Obviously, there is something seriously flawed within our society. So, today, I will take you back through those golden years by reviewing the board game "Dream Phone".

You all remember those silly cards with all of the cute guys on them. Well, most of them were cute. But we don't mean cute by today's standards, we mean cute in a 90s kind of way. You know, the time period when rat tails and bowl cuts were fashionable. The time when geeky glasses made a guy look hot and not just a weirdo. We all had our favorites in this game, for sure. But you have to laugh at some of the photos on the cards. To add to that factor, everyone has a 555 number on the card. Any of you actually try to call these numbers on your real phone? I bet you did. I bet you were wondering if you could call the number and Steve would pick up and say "Hey, I really like you!" I admit to trying that myself as a child. Did anyone ever get lost in looking at the game board itself? There were so many colors going on, and so many weird illustrations on it. You could definitely tell it was made in the 90s because of the neon colors on the board.

How Is it Played

Here is the game in a nutshell. Basically, you have this big pink plastic phone in the middle of the board. Every girl gets cards with the guy's numbers on them and this weird checklist. You begin by calling each guy and he tells you about who your secret crush is. It's basically like a process of elimination mystery game. It's really kind of like the game "Dream Date" from the 50s if you've ever heard of it. Anyways, each guy will give you a clue about who your secret admirer is, and then you have to call and guess who it is. Of course, you will get that one jerk that you call who says "I know who it is, but I'm not telling HA HA!" What a meanie! Once you have figured out who the secret admirer is, you call on the phone and you either get, "Guess again" or "You're right, I really like you!". And that's it, that's the whole game. 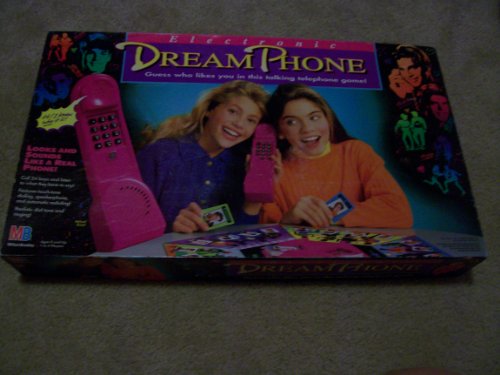 So what made this game so special when we were kids? Well, if you were a twelve year old girl, then you probably played this game. I remember as a kid my older sister had it and even when she grew out of it, I begged her to play it with me. After a while, it gets kind of boring. The bigger question here is why would they market such a game? It's not like they were out making gender specific games like this for boys other than war games and something to do with cars. (And that awesome game Crossfire that even girls thought was pretty cool). It's just a stereotype. But just imagine all of the toys and games that you had as a child. Why is it girls got tea sets and boys got cars? We are kind of instilling gender specific toys and expectations in our kids' minds by doing this. Now, I'm not saying it's not all in good fun, but it is kind of creepy how toy companies market toward genders like that. Even so, I always remained the kid that played with Barbies and toy cars growing up.

Looking back, this game definitely is pretty strange. It's kind of like telling kids to scroll through the phone book and call random guys. (Sidenote: Calling complete strangers is very dangerous and your should not pursue that whatsoever). Even with that being said, seeing this game again is like a stroll down memory lane. This was a staple at any slumber party, and, if you still have the game, it can even be fun to show your kids what a silly, stupid game you used to play when you were their age. I'm sure it will get a few laughs!