Check out my latest featured articles:   Best_Slip_Resistant_Shoes_for_ Women   Megaupload.com   How Much Do Ex-Presidents Make?   Fear and Phobias  Dating 101 for Men and Women Comic Book Catastrophes Prom Night Success Best 1990's Films How to Take Better Photos A Quick Guide to Scottish Food
InfoBarrel is a writing platform for non-fiction, reference-based, informative content. Opinions expressed by InfoBarrel writers are their own.
InfoBarrel > Lifestyle > Law

Dumb Laws: Why Are There So Many Stupid Laws?

I am sure that many of us have seen or heard about some dumb or stupid law that is still in existence today. It’s one of those things that the internet was just made for and if you type it into any search engine you’ll get a myriad of results on the subject.

However, like many subjects researched on the internet the information found is a combination of facts, half-truths and downright lies. Unfortunately the made-up stuff is a lot of the time more entertaining than the truth, and therefore soon spreads and becomes imbedded in the popular culture as ‘fact.’

Publishing dumb laws was once the seldom-used trick of newspaper editors looking to just fill a few column inches or writers that were trying to push an article during a slow ideas month. However the internet has given everyone a vehicle here to publish any stupid law that they fancy and many, as I mentioned earlier, are fabricated for amusement’s sake.

Whether you’re in Abu Dhabi, York, New York or Kuala Lumpur you can find some dump law that is meant to still be enforced by the local constabulary. An official piece of government backed legislation that is so stupid that it must have been conceived by an imbecile to prosecute the ludicrously moronic.

The majority of these stupid laws are fanciful legislature of an over-active imagination but some, are indeed, the word of law, this article will try and debunk the righteous from the internet dross.

Despite my candour about the lack of truth with the dumb laws found on the internet there are actually some out there. So why has this happened? How can there be such a cacophony of terrible laws out there?

Well it is important to understand that the law is not a definite article. It’s not written in stone, and the process of law making is similar to that of language. It evolves. It changes. The law is fluid and should move to accommodate the lifestyles and habits of the people that it protects. Take the relevantly recent example of the creation of the mobile phone. This new invention led a lot of people to use it while travelling and as such were deemed to be driving unsafely because they were doing so with,

However as the law enforcing the appropriate restraints on driving motor vehicles was written at a time when mobiles weren’t invented, the law naturally doesn’t cover it. The simple solution is to amend the existing law to incorporate a change in modern lifestyle, and this was done in the U.K in 2003.

The new law would take the old existing law and add this change so it now states,

a person shall not cause or permit any other person to drive ......on a road while that other person is using – a). hand-held mobile telephone

Job done? Well not quite.

Mobile phones are constantly changing and improving their functionality so why make a law now that may be obsolete in a few years time. What if people start texting or using the internet? The idea in the change of the law was to incorporate all functions of a mobile device so the law included,

(iii)sending or receiving still or moving images, and

So there we have a new law by adapting the existing law. Any previous changes would have taken the law as it stood at that time and added their ammendment to it. So in essence you can have one existing law from the 19th century that has been added to, changed, prodded and probed over the years and is now barely recognisable from the original first law passed. 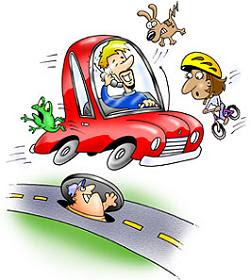 Excellent so we now have a law first written hundreds of years ago that has been amended to increase it’s scope and cover the area that it was originally intended to do. In this particular case: make it safer for road users by enforcing drivers to pay attention on the roads.

Yes it is but let’s look at point (ii) from above,

Hardly anybody faxes things these days do they? No they usually scan them. This is true but in 2003 faxing was more popular than it is today and it was believed that this had to be covered under the new law.

Remember how I mentioned that modern day laws could be an original law dating back to the 19th century? Well what if cars weren’t the only vehicles on the road, if at all, what then? What if it was more popular to drive a horse? What if they decided to ensure that everybody didn’t try and find a loop hole they decided to write that all vehicles, horses and farm animals couldn’t be ridden without proper care? Sounds plausible.

So here we have the crux of the matter. This is how we have so many apparently stupid laws out there. You just  look at the law in its entirety and take a very modern change and apply it to a very old restraint.

For example, in the hypothetical situation above I could take the modern acts of not using a fax machine and apply it to the old, original law and I get.....wait for it..... In the U.K it is illegal to ride a cow while using a fax machine.

And so we have it. This is now published and people around the world believe that a law was specifically written to ban users from faxing while driving a cow.

Having said all that, and probably bored you a little, here are my favourite stupid and dumb laws. It is possible that they might not be true but they are certainly entertaining, and in the end is entertainment not the real truth?

The obvious the answer is no. That would just be stupid, but here is my list anyway.

20. No cows may be driven down the roadway between 10 AM and 7 PM unless there is prior approval from the Commissioner of Police.

19. Any person found breaking a boiled egg at the sharp end will be sentenced to 24 hours in the village stocks (enacted by Edward VI).

17. A man may be arrested for wearing a skirt (what will I do at the weekends now?)

16. It is illegal to sell peanuts in Lee County after sundown on Wednesday.

15. It is illegal for a driver to be blindfolded while operating a vehicle (where’s the challenge then?)

14. Men who deflower virgins, regardless of age or marital status, may face up to five years in jail (I think this must have been passed by a panel of old cougar judges).

13. It is considered an offense to feed alcoholic beverages to a moose.

10. New Yorkers cannot dissolve a marriage for irreconcilable differences, unless they both agree to it.

9. If any person has a puppet show, wire dancing or tumbling act in the state of Indiana and receives money for it, they will be fined $3 under the Act to Prevent Certain Immoral Practices.

8. It is illegal for a man to be sexually aroused in public.

6. No one may sing the alphabet on the streets at night

5. A man over the age of 18 may be arrested for statutory rape if the passenger in his car is not wearing her socks and shoes, and is under the age of 17.

4. Citizens may not enter Wisconsin with a chicken on their head.

3. All cars entering the city limits must first sound their horn to warn the horses of their arrival.

2. Dead chickens may not be hauled across Kansas Avenue.

1. One must get a permit from the city if they wish to take dirt from the airport. Many thanks to dumblaws.com for their info.

Next >> Why You Should Have a Will