Dyson AM02 Mini Tower Fan Vs AM02 Tower Fan - What's the Difference?

Recently Dyson have released a mini version of the AM02 (August, 2013) -- this comparison account: AM02 mini tower fan vs AM02 tower fan -- just hopes to clear up any confusion you may have on the differences between the AM02 (new) compact tower fan and the AM02 (traditional) tower fan, in terms of air flow speed settings, features, aspects and specifications etc. Allowing you to ultimately determine which model is better suited to your cooling needs & also which offers the best value for money.

Both models (the mini AM02 & standard AM02) offer the ultra smooth  (non-buffeted - like you get with traditional bladed fans) and comforting air flow through utilising Dyson's unique air multiplier technology that works through the process of inducement and entrainment (in turn allowing it to operate without exposed blades). As you would expected though the AM02 mini doesn't produce an as powerful airflow as the standard AM02.

So basically the mini AM02 is a sort of cross between the table/desk AM01 Dyson fan ( for individual cooling) and the larger AM02 tower fan (whole room cooling) -- being more powerful than the former, but less so than the latter. Note: the mini tower fan is aimed for whole room cooling like the AM02 standard as well.

The AM02 mini is literally that... a compact version of the AM02, so it still takes on all the beautifully crafted curves (fitting in nicely with most decor), but only comes in one colour (so far) the silver/silver combination. As with all the Dyson air multipliers though, it gives that added sense of openness & lightness, whereas a bladed fan generally produces a cluttered & shadowed type feel (as obviously you can’t see through it etc.).

So actually, the mini AM02 is only 13 cm smaller than the original version, so not really all that ‘mini’ in fairness. But anyhow, these models both only has a 25 cm base so they aren’t really all space consuming anyway-- and are perfect to be situated in a living room or an office space.

They both come with a remote control which you can control the airflow with precision (i.e it is fully variable -- not just the standard 3 speed settings you get with most fans) through the dimmer switch control and the control is also magnetic so it conveniently sits on the top of the fan (where the shape of the remote matches the curvature of the AM02, which just really shows how much of a premium device this is -- all in the little details). 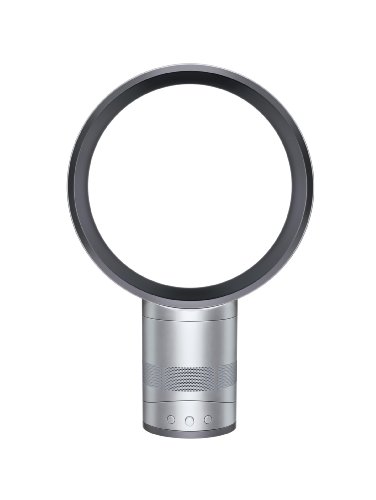 The AM02 mini and AM02 oscillate on a near 180 degree turning angle to distribute air evenly throughout the room at up to 7.5 metres (which can also be controlled on the remote or at the base). Moreover, as they are both bladeless -- the AM02's are i) extremely easy to clean (as there is no grill involved, due to their being no blades), ii) safe to be around curious kids and iii) is more than just a fan -- it is a cool talking point (no apologies for the pun), it is more of a futuristic gadget.

Conclusion: Should You Buy the AM02 Mini or AM02 Tower fan?

Both are priced at around the $450 mark, so in fairness there isn't actually any real difference between the two in terms of value for money. I would suggest -- go for the mini, simply if you want slightly less space taking up -- or the standard if you are after a slightly more powerful air flow, other than there isn't any real significant differences to be had (in general I would still go with the AM02 standard in fairness). They are expensive, but aren’t most things with Dyson? That being said, like their vacuum cleaners, you are getting what you pay for -- a premium price for a premium fan: offering you a powerful, smooth (non-buffeting, non-choppy, non-irritating) air flow all packaged up in a super cool looking device.