Here, we take an in-depth analysis on the two newly released (as of 2013) and rather similar functioning compact cylinder based Dyson vacuum cleaners (being the DC47 and DC49); highlighting both their differences as well as their similarities amongst their respective features and specifications. Ultimately, this account hopes to help to clear up any confusion/debate you may be having as to which to choose/buy between the two -- through taking a specific outlook on all the aspects of the two vacuum cleaners -- from which you can then decide which of the offers you the best value, relative to its given price tag.

From the outlook in regards to power of the two compact cylinder vacuums, there is obviously no difference -- where both are encompassed with 180 watts of suction power. Which given their size (especially for the DC49) is incredibly impressive -- and are able to easily compete (and even out perform, in given cases) with that of 'fully-sized' canister vacuums. Therefore, you should certainly have no worries as to the cleaning performance for both these vacuums --both are more than capable of performing a 'very good' vacuuming job on the typical standard home. If it boils down to it however on which is better, the DC47 arguably just 'marginally' outperforms the DC49 due to it being fitted with the more advanced technology. 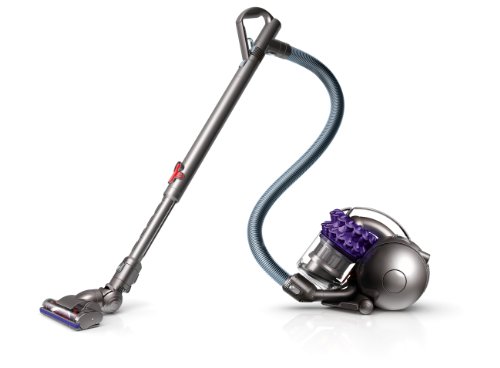 The DC47 is encompassed with a two-tier radial root cyclone system, whereas the DC49 is only fitted with the singular tier -- this simply implies that the DC47 is able to generate higher centrifugal forces, which then allows the vacuum to be able to pick up more and smaller particles of dust and debris. This being said, even the singular radial root cyclone can suck up microscopic dust particles as small as 0.5 microns (so to the naked eye, the actual outcome will be practically minimal). Moreover, as with all Dysons, being fitted with Root Cyclone technology enables them to prevent loss of suction with gradual dirt and debris pick up.

Obviously both are a cylinder make (so hopefully this follows your preference, if not you should probably look at an upright such as the DC50) as well as both being fitted with the recent Dyson Ball technology (updated -- 2nd generation) which provides them both with a great advantage over that of other standard rigid wheel canister vacuums: as they don't require to be dragged back and forth to get round tight corners, instead they can simply turn on a singular point. With regards to weight 'both' are obviously extremely light, however the DC49 is as of yet the lightest cylinder vacuum that Dyson have ever produced making it easily the most comfortable and mobile vacuum on the market as of yet. This said, the DC47 is in itself also 'very' easy to use also (especially compared to your standard cylinder vacuum), to the point (despite being heavier) being recommended by the College of chiropractors.

Given that they are both ultra compact vacuums it is obvious that they are great for those who are short on storage space -- for instance the DC49 can fit on a singular A4 piece of paper (being it also the 'smallest' vacuum that Dyson have produced). However, do keep in mind though because they are such small vacuum cleaners they aren't all that suited for those with the bigger home -- aimed more towards those who have small apartments etc. So the max reach of the DC47 and DC49 is 13.3 m and 13.52 m respectively as well as the bin size only being 0.58 litres and (estimated, as figures have been withheld) 0.4 litres. If you have a standard/larger sized home, you should probably check out something like the DC41 for example as this will provide you with better 'suited' practical specifications.

The standard multi-floor versions of the DC47 and the DC49 come with the combination tool (which is basically both a crevice tool for vacuuming tight and awkward gaps which also doubles up with a brush nozzle as to offer the user powered dusting) and a stair tool. However, with the Animal version (not sure as of yet if the DC49 comes as an animal version, currently just the multi-floor has been released) you are also being equipped with the highly rated pet hair turbine the  'tangle-free turbine tool' which offers a highly efficient means of owners picking up pet hair etc.

To further improve the functionality of your Dyson vacuums it is also worth considering in investing in their official 'cleaning' kits (you may also invest in specific tools individually, however I advise in investing in the bundles as you gain from significant discounts) e.g. the Dyson Home Cleaning Kit -- which offers you the 'soft dusting brush', 'stubborn dirt brush' and the 'up-top brush' (see below). 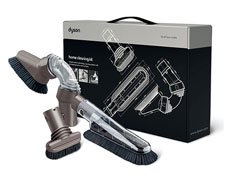 It should also be noted that both the DC47 and the DC49 are fitted with HEPA filters that allow for prevention of allergens and dust from being expelled into the air when the vacuum is in use.

Moreover, every Dyson vacuum (when purchased new) is backed by an 'award winning' 5 year 'parts and labour' warranty.

A particular highlight of the DC47 and DC49 are the 'reduced' noise acoustics exhibited by them, particularly the DC49 which because it is the first cylinder vacuum to operate on a Dyson Digital slim (which also makes it extremely energy efficient) as well as the 'new' implemented 'acoustic engineering' in order to both reduce sound noise to an absolute minimum as well as improve sound quality.

In truth, these two vacuums are both incredibly similar -- where both exhibit the same sort of suction cleaning power, both are fitted with the advanced radial root cyclone (although the DC47 has the more 'advanced' version and offer similar practical specifications (e.g. cord length, max reach etc.). The only real difference comes in the fact that the DC49 is 1) incredibly small and compact (obviously however the DC47 also is) and 2) the DC49 is also extremely silent which could be the major selling point for some customers (Dyson describe it as its "quietest" vacuum yet) -- all this does however (usually) come with a more expensive price tag of roughly an extra $50. It is hence up to you as to whether you value those 'advantages' at the extra cost, obviously if you don't then go for the DC47. Personally, I would advise unless you have the utmost need for either silence (whilst vacuuming) or incredibly tight on space, I'd go for the DC47.

If you have any questions, remarks or concerns regarding either the Dyson DC47 or the DC50 vacuum cleaner specifically or about the actual review, then please do not hesitate in leaving them below in the comments section below.