Find me on Google+ Like what you see? Think you can do better? Sign up for InfoBarrel!
InfoBarrel is a writing platform for non-fiction, reference-based, informative content. Opinions expressed by InfoBarrel writers are their own.
InfoBarrel > Lifestyle > Holidays & Celebrations

The Origin of Earth Day

Founded by Senator Gaylord Nelson in 1970, Earth Day is celebrated worldwide on April 22 of each year. Senator Nelson had originally become increasingly worried by the legislative priorities given to the environment, and in 1962 approached President John F. Kennedy about going on a conservation tour. President Kennedy was convinced, and in September, 1963, went on a five-day, eleven-state speaking tour, but ultimately was unable to raise legislative support for conservation. Senator Nelson continued to work on raising environmental awareness over the next six years, but at last, horrified by the Santa Barbara oil spill of 1969, Senator Nelson wrote:

I am convinced that all we need to do to bring an overwhelming insistence of the new generation that we stem the tide of environmental disaster is to present the facts clearly and dramatically. To marshal such an effort, I am proposing a national teach-in on the crisis of the environment to be held next spring on every university campus across the Nation. The crisis is so imminent, in my opinion, that every university should set aside 1 day in the school year-the same day across the Nation-for the teach-in.

Senator Nelson's office organized the first Earth Day, involving mostly schools, from elementary schools to universities. (I remember that first Earth Day celebration in my own school!) The first year, approximately twenty million Americans celebrated Earth Day, and it has become more popular with each passing year. Indeed, that date is often thought of as the beginning of the modern environmental movement. By Earth Day 1990, public pressure from 200 million people in 141 countries began the modern recycling movement. By the year 2000, Earth Day organizers had begun to use the Internet to organize hundreds of millions of people in 184 countries around the world. In 2007, it is estimated that over a billion people were involved in Earth Day activities.

The Impact of Earth Day

In 1993, American Heritage Magazine called Earth Day "one of the most remarkable happenings in the history of democracy." Earth Day, as the beginning of public education about the environment, has blossomed into concern for numerous areas of concern that in 1970 were almost unheard-of. Some of those areas include:

Today, ordinary people all over the world are growing up to be more concerned with the state of the planet: the fertility of the soil, the balance of nature, the cleanness of the air, the purity of the water, and most recently the state of the oceans. As someone who was born in the 1950s, the changes that have been made in societal consciousness during my short lifetime, thanks to the observance of Earth Day are truly remarkable. And while many still believe that nothing people can do will have any real effect, science has proven otherwise, in many different areas of the world. DuPont's slogan of "better living through chemistry" is as outdated today as a Packard automobile.

How to Observe Earth Day

What can you do to celebrate Earth Day? Chances are, you're already celebrating Earth Day in your daily life, through all the changes that have been made to societies around the world as a result of the environmental movement. But just in case you really have been living under a rock for some time, here's just a few ideas of the hundreds that people have come up with:

If you can't do any of these, perhaps you can come up with your own ideas. You can also do crafts to use yard waste, or find something you were going to throw away and instead, use it in another way. 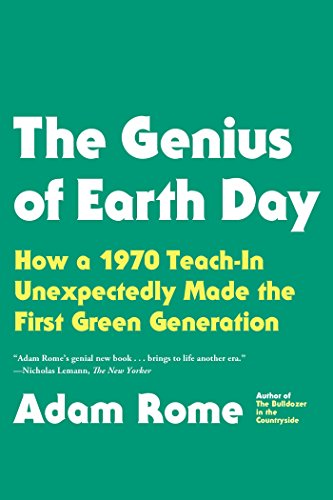 The Genius of Earth Day: How a 1970 Teach-In Unexpectedly Made the First Green Generation Amazon Price: Buy Now(price as of Oct 26, 2014)
An inspiring look at the history of Earth Day, and how the vision of one senator started an entire movement.

The impact Earth Day has had on the people of the entire world has been immeasurable, and has resulted not only in sweeping changes in private industry and public awareness and habits, but also in astonishing changes in governmental action worldwide. Now, even the poorest countries are working to preserve their natural resources, restore habitats for sustainability, create a healthy living environment for their populations, and we are seeing a new era of cooperation between countries that one could not have imagined in the 1950s, before Earth Day.

Indeed, Earth Day has begotten a number of imitators, as community organizers and grassroots movements have learned from its success. With such an example before us, we can only imagine what a similar movement might do today. The possibilities for community action of this sort are endless. If for no other reason, even if you are not an environmentalist, you might do well to celebrate Earth Day as a reminder of what can happen in a very short time when people care and are educated about an issue, are ready to act together for change, and can coordinate their resources and actions. So get out there on April 22nd each year, and let people know that you are aware of the power of grassroots movements.