Edith Bunker: One of the Best TV Moms of All Time

Over the years we have gotten to know some very memorable TV moms. I really liked many of the characters, such as Carol Brady, Shirley Partridge, Clair Huxtable, and most recently, Camille Braverman from Parenthood.

However, if I had to pick a favorite TV mom, it would be Edith Bunker from All in the Family.  This classic series was a hit from its debut in 1971.  All in the Family was part of a very  successful group of ground breaking sitcoms featured on CBS.

For several years it was cool to stay home Saturday night and watch the Bunkers, along with Mary Tyler Moore and a few others.  Of course this was long before VCRs or DVRs were heard of. If you wanted to watch a program, you had to be home to see it.  I certainly am grateful for the invention of DVRs because with so many channels to chose from and programming on 24/7 it is not possible to see everything live as we used to.

Why Edith Bunker Was Such a Great TV Mom

What made Edith such a memorable and popular character? I think there were several reasons why she was so well loved by many people. She lacked education and was often slow to figure things out. Even so, Edith was often the wisest person in the family.  Having a great education does not necessarily mean a person has common sense.   She had it though, and it was often needed when dealing with her family.

Edith treated others as she wanted to be treated.  She was well known for not being critical of others which of course was in great contrast to her husband.  Edith had a cheerful and optimistic attitude most of the time.

She often had good advice to give provided that others were willing to hear her out. Edith was often called upon to be the peacemaker in the family. Hardly a day would go by without Archie and Mike (and sometimes Gloria) getting into a heated argument.

Edith couldn't stand fights and controversy, and she could usually find a way for family members to come to a truce. That wasn't easy since both men were hot headed. This was in contrast to Edith's sweet, gentle nature.

Another reason why Edith was so memorable was because she was kind to everyone. She accepted people for who they were, and didn't expect others to conform to her standards. She frequently scolded Archie for his conduct, particularly in later years on the program. Edith was as honest as the day is long.

One example was when she sent in a coupon to a prune company to receive a 25 cent rebate. The business kept sending her quarters and quarters, even when she was returning them. The money kept coming in to the point that she couldn't keep up with it.  She  had no idea how to make it stop.

Edith was afraid to tell Archie but finally confessed to Gloria and Mike. Of course, when Archie  did learn about it, his solution was much different than Edith's.  Archie thought she should keep the money and not be concerned about it. You can't help but like someone with that kind of character. She was always determined to do the right thing, even if it meant going against Archie's wishes.

She trusted everyone until they were proven to be untrustworthy. This could sometimes present problems. It did not occur to her that others might do things that she would never dream of doing herself. Her innocence was mostly charming and funny though.

I really liked her relationship with Gloria.  The two women were very different in many ways. Gloria did not understand how her mom could be happy without having a career.  Edith did not interfere in Gloria's marriage and generally did not give advice unless asked.  She was heartbroken when Gloria and Mike split up, but didn't hold a grudge against Mike as Archie did.

Edith was a kind and loyal friend. She was very loyal to Archie, despite his frequent outrageous actions. Archie often referred to her as "dingbat' but he was equally loyal to her.  He couldn't imagine life without his wife.

Edith Developed Into a Stronger Woman Over the Years

All in the Family got better as time went on, up until the season when Mike and Gloria left for California. I didn't find it quite so interesting after that.

Edith started to work at a retirement home.  For the first time she had a job outside the home, and she found that to be very satisfying. She learned how to stand up for herself, and be more assertive with Archie. Edith rebelled one evening when Archie refused to take her out. She went out on her own to the  pub where many of the locals spent their time. Archie was amazed to find her there, and even more amazed to realize she was having a good time without him.

It was nice to see Edith grow as a person. It's hard to image a TV couple more different than Edith and Archie.  Even so, they really were meant to be together.  The couple really loved each other despite their differences, and she was a great wife to Archie.  She was too subservient at times, but eventually that  began to change.   A touching episode occurred when they went to Atlantic City for their 25th anniversary and stayed in the same hotel where they were on their honeymoon. Archie could even be romantic at times.

Sadly, Jean Stapleton passed away in 2013. She was a great lady and very different from the character she played so convincingly for many years.  The character of Edith lives on with reruns on various channels and of course on DVD.

All in the Family First Season 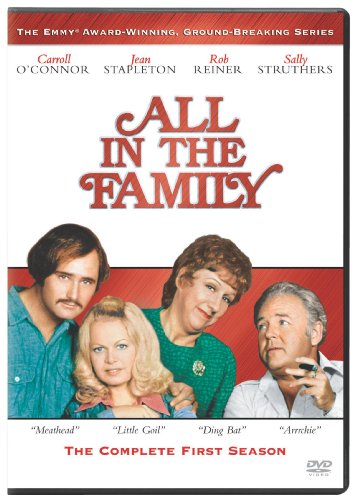 All in the Family: Complete First Season Amazon Price: $19.99 $8.44 Buy Now(price as of Jan 15, 2015)
The first season introduced viewers to a different type of sitcom, and it was immediately successful. The program was not shy about discussing topics that had not been done on TV before. It would look tame by today's standards.
Next >> The Rags to Riches Life of Dame Shirley Bassey