Ellis Island: the Beginning for Many Americans

Ellis Island is a small island with a big history.  The island was called Gull Island by the Mohegan tribe in the 1600s and was just short of three acres.  When Dutch settlers discovered its oyster beds in 1628, the island was renamed Oyster Island.  In 1765 it was renamed Gibbet Island after the instrument used to hang Anderson the Pirate.  Around 1776 Samuel Ellis purchased the property and renamed it Ellis Island.  That name finally stuck.

In 1785 Ellis attempted to sell the island, but had no luck.  In 1794, Ellis died and New York bought the island from his family for ten thousand dollars. The federal government took over the island in 1808 and used it as a military post where munitions were stored beginning during the War of 1812.  The Union Army stored munitions there during the Civil War.  After the Civil War, the island stayed vacant until the federal government took over immigration from the state.

The Naturalization Act passed in 1790 which allowed all white males living in the U.S. for two years to become citizens. The first great wave of immigration began in 1814 with almost five million arriving from northern and western Europe over the next 45 years. [2] The Castle Garden, located at the Battery in lower Manhattan was opened in 1855.  It was one of the first state-run immigr

Credit: author unknownation stations.  The potato blight in Ireland brought over a million Irish immigrants to America; along with large numbers of Germans fleeing political and economic unrest.  The Homestead Act in 1862 attracted even more Europeans and Castle Garden could no longer handle the increasing flow of immigrants. In 1890 the House Committee of Immigration selected Ellis Island as the site for a new immigration to America screening station.

The island was increased to about six acres by landfill and a ferry slip was built.  By 1892 the island had been increased in size to fourteen acres to accommodate the immigration depot and support buildings and the first building was opened for business; a huge three-story facility made of Georgia pine with blue slate roofing.

On opening day, January 1, 1892, the new commissioner of New York, Col. John B. Weber presented a ten dollar gold piece to the first immigrant to walk through the new station’s gates.  That person was fifteen-year old Annie Moore, who vowed to “never part” with the gold pie

Reports on the conditions at the Battery were not good.   In December of 1900, the New York Tribune reported the conditions as an environment geared more for animals than for prospective citizens of the United States.  That same year the Boring & Tilton architectural firm constructed the new fireproof building on Ellis Island at a cost of $1.5 million.[2] On December 17, 1900 the new building was opened and thousands of immigrants were processed.

Credit: photo courtesy of the Library of Congress

In addition to the main building, Boring & Tilton designed a Kitchen and Laundry building, the Main Powerhouse, and the Main Hospital building.  Two new islands were created using landfill; one to house the hospital administration and contagious diseases and the other to house the psychiatric hospital.  By 1906 Ellis Island had grown from its original three acres to over 27 acres.

As of 1903, anarchists were denied admittance to the United States.  In 1907 Ellis Island experienced its highest number of immigrants processed in a single year with 1,004,756 arrivals.[1]  The government passed a federal law excluding persons with physical and mental disabilities and also children arriving without accompaniment of adults.

The First World War brought a decline in receiving immigrants to America. Starting in 1917, Ellis Island was used as a hospital for the U.S. Army, a way station for the Navy, and a detention

Credit: photo by Lewis Hines center for enemy personnel. A literacy test was introduced and continued until 1952.  Anyone over the age of 16 who could not read 30-40 test words in their native language was denied admittance through Ellis Island.[1]  Almost all Asian immigrants were banned.

At the end of the war, the victory of the Russian Revolution created a “Red Scare” in America. In response, Ellis Island was used to intern immigrant radicals accused of subversive activities with many of them deported back to their countries of origin.  Post-war immigration brought 590, 971 people through Ellis Island. As a result, President Warren G. Harding signed the Immigration Quota Act into law in 1921.

The quota law, also known as the Emergency Quota Act, stipulated annual immigration from any country could not exceed three percent of the total number of immigrants from that particular country already living in the United States.  Eventually, the percentage was reduced to two percent.  Quotas were based on the 1890 U.S. Consensus.  In 1924, the National Origins Act was implemented and reduced immigration further, allowing a total annual immigration of 165,000 and fixing quotas of immigrants from specific countries.

The Great Depression brought about more immigrants leaving the country than arriving.  The buildings on Ellis Island began to be neglected and abandoned.  By 1949 the Coast Guard was using most of Ellis Island for office and storage.  The Internal Security Act of 1950 excluded arriving immigrants who have previous links to communist and fascist

Credit: photo courtesy of Popular Science Monthly Volume 80organizations which does cause a brief increase in activity at the island.  Buildings were renovated and repaired to accommodate the detainees.  However, the Immigration and Naturalization Act of 1952 and a liberalized detention policy reduce the number of detainees to less than 30.[2]

November, 1954 all 33 buildings on Ellis Island were officially closed.  In March of 1955 the government placed the island under the jurisdiction of the General Services Administration.  It would remain there until 1965.

In 1965, Lyndon Johnson issued Proclamation 3656 and this placed Ellis Island under the jurisdiction of the National Park Service as part of the Statue of Liberty National Monument.  In 1976, Ellis Island opened to the public and featured an hour-long guided tour of the Arrival Building.  In the same year, President Johnson signed a new bill on immigration, the Hart-Cellar Act which abolished the previous quota system and established the foundation for modern immigra

In 1982, President Ronald Reagan requested Lee Iacocca to head the Statue of Liberty-Ellis Island Foundation to raise funds from private investors to restore and preserve the two.  Restorations begin in 1984 and were completed in 1990 at a cost of $156 million.[1]  The main building houses the Ellis Island Immigration Museum.  Many of the rooms are restored to original appearance during the island’s peak years. Today, the Ellis Island National Monument continues to stand as a reminder of all the immigrants who came to America in those early years.

The copyright of the article Ellis Island: the Beginning for Many Americans is owned by Cheryl Weldon and permission to republish in print or online must be granted by the author in writing. 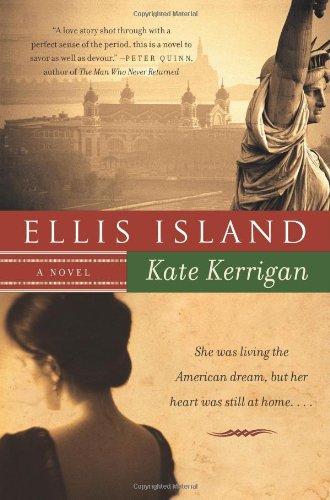 Ellis Island: A NovelAmazon Price: $13.99 $6.63 Buy Now(price as of Apr 14, 2014)
This fictional novel set during 1920s follows a young Irish immigrant who must choose between her new life in New York and her husband back home in Ireland. Though fictional, the novel brings historical backgrounds of the era and life as an immigrant coming through Ellis Island.

Starting a new life with little more than a couple of suitcases.