“Everything in life is writable about if you have the outgoing guts to do it, and the imagination to improvise. The worst enemy to creativity is self-doubt.” â€• Sylvia Plath, The Unabridged Journals of Sylvia Plath Be fearless. Start writing today for Infobarrel and make $$$ while you're at it.
InfoBarrel is a writing platform for non-fiction, reference-based, informative content. Opinions expressed by InfoBarrel writers are their own.
InfoBarrel > Lifestyle > Holidays & Celebrations > Weddings

Emerald Engagement Rings: Purchasing a Gem For That Special Someone

The Symbolism of the Emerald

If you’re looking for a beautiful ring that is different from the traditional diamond ring, consider emeralds. Jackie Kennedy and the Duchess of Windsor proudly showed the world their emerald engagement rings. Since then, this green-hued gem then became a style icon, worn by celebrities to add a beautiful shade of color to accent their fashion on red carpet events.

Emeralds are popular today because of their beauty and vibrancy. Due to their rich green hues, they have also been symbolic of many positive attributes. These precious stones traditionally have represented love, loyalty, devotion and adoration. Who wouldn’t want such qualities in an engagement ring? It has also been said that they alert the wearer of danger by changing color.

In some cultures, the stone was associated with supernatural qualities. If the emerald was worn on the left side of the body, such as an engagement ring, the wearer could see into the future. They could even use the stone to protect themselves against evil.

Finally, an emerald represents new possibilities. It symbolizes spring and rebirth, which makes it a beautiful way to show your loved one your desire to embark on a life together.

Like other gems, emeralds are graded by the four C’s: color, cut, clarity and

carat weight. Previously, the quality of a gem was described by the term water. A quality gem would be described has being of a fine water, describing the color and clarity. Of the four C’s, the color of a gemstone is the most important criterion. This also applies to emeralds, although clarity is very important as well. A quality emerald will have a vivid green color and also a high degree of transparency. Such fine qualities are especially important in an engagement ring, in which the center stone is the “star of the show”.

The primary hue of an emerald is green, although secondary hues in the gem range from a yellowish green to a bluish green. Only gems with a medium to dark tone are classified as emeralds. Their lighter colored counterparts are referred to as green beryl. The quality of this stone is also determined by its tone: the highest quality emeralds are around 75% tone, in which 0% tone is colorless and 100% tone is black.

A more vivid emerald is higher quality than one that is less vivid, which is lower on the saturation scale. Less vivid counterparts are a duller hue, with gray hues masking the gem's vibrancy.

Initially, it may seem like a bad thing that emeralds have inclusions in them. However, they do not detract from the value of the emerald compared to other stones. In fact, sometimes the inclusions can actually enhance the beauty of the stone to product a certain look, similar to moss or ferns.

While a diamond is inspected using magnification, the emerald is graded by eye. If it has no visible inclusions to the naked eye, it is considered flawless.

Due to their fissures, emeralds are normally treated with oil or resin to reduce surface reaching cracks. Oil that has a similar refractive index, such as cedar oil, is used to improve the clarity and stability of the gem. When purchasing an emerald engagement ring, inquire about the type of treatment used on the stone. According to the U.S. Federal Trade Commission, disclosure of treatment is required for the sale of the precious gem. Although oil is a frequently and commonly acceptable method of treating an emerald, an untreated emerald of the same quality is worth more.

There are some treatments, however, that are unacceptable. Using green tinted oil is not acceptable, since this is essentially coloring the gem. Since the vast majority of emeralds are treated, it is prudent to read all the details carefully before you make a large investment on a ring. Two emeralds may appear visually similar to the naked eye, but can be far apart in terms of level of treatment and therefore of value.

As mentioned, there is a variation in price depending upon the quality of the emerald. An emerald that appears “clean” to the eye and of vivid green hue, with less than 15% of any secondary hue such as blue or yellow will cost the most.

Emeralds are commonly found precious stones in mines throughout the world. However, only rarely are they large and high quality. For instance, a 1 carat version can range in price from $50 for a commercial grade stone to $10,000 for a very fine stone[1]. Like other gemstones, larger emeralds are much rarer than smaller ones. Hence, a 5 carat stone will cost significantly more than a five 1 carat stones. 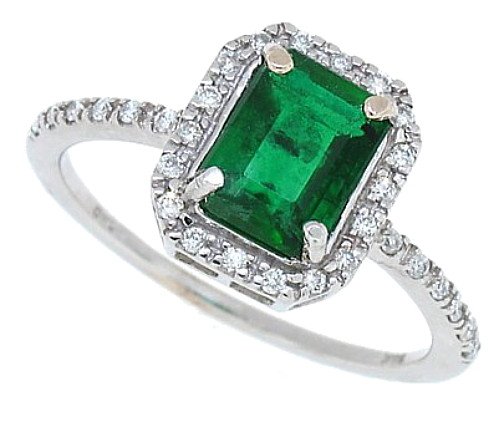 1.30Ct Emerald Cut Genuine Emerald Diamond Ring,14Kt White Gold Amazon Price: Buy Now(price as of Oct 31, 2014)
Purchasing an engagement ring online is often more affordable than purchasing in-store. It is important to read all the information in detail first, though.

Emeralds have been mined in Egypt since 1500 BC, and in India since the 1300s. Unlike the diamond, emeralds were discovered much earlier and some have some interesting stories of smuggling. Nowadays, Colombia is the world’s largest producer of emeralds, constituting over half of world production. The second biggest producer is Zambia. However, these stones are found in all continents of the world. Once again, it is the quality that determines the cost of the gem.

Emeralds are often cut into cabochons, which means they are shaped and polished, rather than faceted. This is a common way of cutting softer stones so as to make the scratches on the stone less evident. Otherwise, they are cut into the signature Emerald cut, which is rectangular with facts around the top edges.

Emerald engagement rings are often presented with a platinum, white gold or gold band. Smaller diamonds or white sapphires serve as accents. On the finger, the green hue of the stone truly stands out and catches the eye.

To take good care of your emerald engagement ring, do not wear it when you are exercising or working with your hands, as these activities can leave scratches on the gem. Clean your ring by soaking it in warm water and using an old brush behind the stone.

The emerald is a truly beautiful stone, especially when placed on the ring finger. Each emerald looks unique, and has a story behind it. 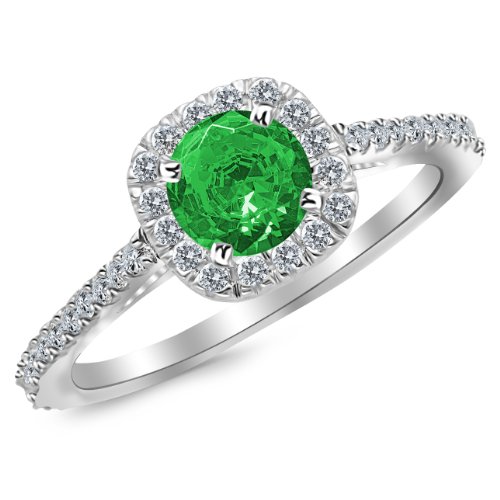