Rapa Nui: Was There an Environmental Disaster on Easter Island?

Credit: By Aurbina (Own work) [Public domain], via Wikimedia Commons

Rapa Nui or Easter Island is best known as the home of the monumental stone statues known as moai. This 63 square mile dot of land in the middle of the Pacific Ocean is considered one of the most isolated places on earth.  Its nearest neighbors live on the Pitcairn Islands, 1,100 miles to the west, and the Chilean mainland lies 2,300 miles to the east.

Rapa Nui is also an island of mystery. No-one knows how the original Polynesian settlers managed to find this tiny speck of land surrounded by thousands of miles of empty ocean. No-one knows why they created hundreds of gigantic statues, or how they managed to move these monoliths, some of which are more than 30 feet high and weigh up to 82 tons. Nor is there a satisfactory explanation of why, sometime in the eighteenth century, Rapanui society collapsed.

One generally accepted theory was made popular by the 1994 movie Rapa Nui. This film depicts a society torn apart by warfare and driven to cut down their last remaining trees for the transportation of their sacred statues. However, this theory has been challenged by experts who believe that the Rapanui lived in harmony with their environment, and that it was actually contact with Europeans that sealed their fate.

Although Rapa Nui today is a bare, treeless island, archaeologists have proven from pollen counts that when Polynesians first arrived on the island sometime between 700 and 1200 A.D. it was a lush paradise covered in giant palm forests.

The island was generous to its new human inhabitants. The bounty of the gardens planted in fertile virgin soil and an ocean teeming with fish supported a growing population.  Their culture thrived.  They were able to develop a stratified society of farmers, artisans, priests and warriors, and to devote time and resources to the construction of moai.

Destruction of an Ecosystem?

Human activity is generally blamed for the deforestation. The newcomers cleared trees to plant gardens, and used wood as fuel, to build boats and houses, and perhaps as rollers to transport moai. Another theory is that the trees disappeared due to the introduction of an alien species: stowaway rats that arrived with the original colonists. Archaeologists have found evidence that the rats ate the seeds of the giant palm tree.  If they consumed all the seeds, this would have prevented the growth of new palm trees.

Credit: 'On the New Zealand Rat. (With Illustrations.)', by Walter Buller, Transactions and Proceedings of the Royal Society of New Zealand, Volume 3, 1870, between pages 2 & 3 Public Domain via Wikimedia Commons

Those who argue in favor of environmental disaster describe a scenario in which, as the ancient palm forests disappeared, the island’s mountain slopes became bare and the soil began to erode.  Erosion increased as the people burnt grass and other vegetation for fuel. As the island became more and more barren, it became increasingly difficult to feed the population. Resource competition led to warfare and starvation, and the population crashed.

Other experts do not believe that there was an environmental disaster at all. They point out that areas containing some of the island’s richest soil were never used for gardens, and that when they created gardens the Rapanui built stone walls to prevent erosion. Although the giant palm trees may have disappeared the islanders were using the leaves of other palms to thatch their huts when the Dutch landed in 1722. There were also trimora trees which they used to build canoes and houses.

But something did happen to the Rapa Nui. The historical record reveals that when Dutch explorers arrived on Easter Day, 1722, there were approximately 8,000 people living on the island.  When British explorer James Cook visited the island in 1774 the population was only about 3,000 and there were no trees taller than ten feet. By 1877, with only 110 surviving Rapanui, the people and their culture had all but vanished. 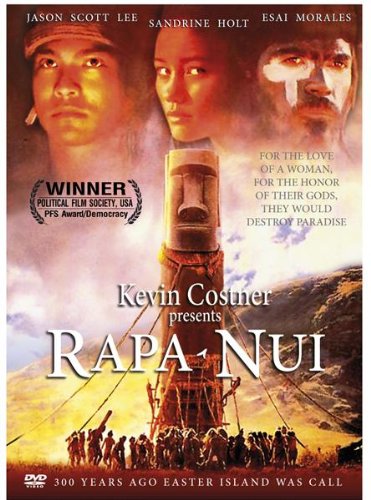 The Rapanui were living on an isolated island with finite resources. Because the earth is as isolated in space as Rapa Nui in the Pacific Ocean, with resources that are just as finite, many disturbing environmental parallels can be drawn between Easter Island and the earth.

The environmental argument goes as follows. When they cut trees for agriculture, the Rapanui began a process of deforestation which ultimately resulted in ecocide, the destruction of their own environment. Now the Amazon rainforest is being similarly cleared to make way for agriculture, logging companies are clear cutting old growth forests and human activity is responsible for wholesale erosion.  As their forests disappeared, the inhabitants of Rapa Nui wasted their shrinking resources in order to construct moai. Today, humans continue to consume resources and pollute the oceans and the atmosphere in order to manufacture and transport consumer goods.

The story of this insignificant speck of land and what happened to its inhabitants has thus become a symbol of the human capacity to destroy the environment if population growth and consumption are not kept in check. However, an examination of the population decline on Easter Island in relation to historical events reveals another fatal scenario which tells a different story. In this version of history the villain is not the entire human race but just its European branch.

When the Dutch discovered Rapa Nui in 1722 the population of the island was about 8,000. After its discovery, Easter Island became a supply station for whaling ships. The sailors who came ashore raped local women and infected them with syphilis which may have been a major factor in the decline in population to the 3000 inhabitants found there by Captain Cook in 1774.

In 1862 Peru began capturing islanders as slaves. It is estimated that they took more than 1,000 people from the island, a number which represented a significant percentage of the small population. After most of the slaves had died in captivity, Peru returned the few surviving slaves to Easter Island. Tragically, the returning slaves brought smallpox with them, and the subsequent epidemic reduced the population to the 110 souls who remained alive in 1877.

Credit: By Pascal at en.wikipedia [Public domain], from Wikimedia Commons

Europeans continued to persecute the remaining Rapanui. After Peru sent the slaves back to their island, invaders repeatedly destroyed garden crops and burned homes in an effort to make the people leave the island. When Chile annexed Easter Island in 1888 they placed the Rapanui in a detention camp so that the island could be converted into sheep farms. Shockingly, they were not freed until 1964.

All we know for sure is that the Rapanui left hundreds of moai to silently guard their island and its secrets. These enormous sentinels stare haughtily down their long-nosed faces and purse their lips in silent scorn as if mocking modern day onlookers who are unable to solve the riddle of why their builders disappeared.

Here is an excellent BBC documentary about Easter Island