Ever After High Dolls

Back in 2010, Monster High dolls took the doll genre by storm. These collectible mini glam monsters were the offspring of well-known creepy characters such as Frankenstein, the Mummy and Count Dracula.

With the popularity of the hit ABC show “Happily Ever After”, Mattel has debuted another line of dolls that are a cross between Bratz and Monster High

This new line of merchandise is called “Ever After High Dolls”.

The gimmick is similar to Monsters High. These characters, who are all teenagers, are the children of beloved fairy tale characters as well as the villains they faced. They attend school and need to make an important life decision-should they embrace their destiny or should they rebel against it.

The Royals Versus the Rebels

Who are the Rebels?

The dolls are divided into two groups, the Royals and the Rebels.

Against what are these teens rebelling against?

First, there is Raven Queen, who is the daughter of the much disliked Evil Queen who fed Snow White the poison apple. She is frustrated by her reputation that she did not earn-it was her mother who is the nasty one. Raven really does not want to be a bad person. How will her mother take it if she rejects her destiny?

Cedar Wood is the daughter of Pinocchio, the famous fairy tale liar who gave mothers around the world a line they could use if they suspected their son or daughter way lying, “I can see your nose growing!” Cedar really does not want to be a liar, as she can see how wrong this is. 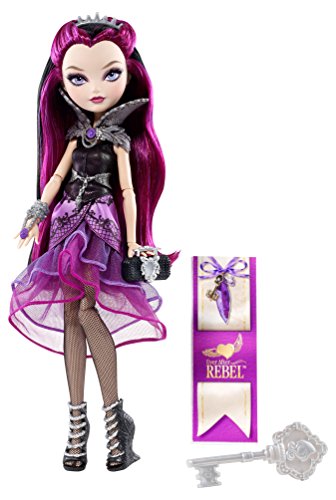 Ever After High First Chapter Raven Queen Doll Amazon Price: $19.99 $19.22 Buy Now(price as of Jan 24, 2016)
A legacy is a wonderful thing...if it does not involve trying to hurt or kill someone. Raven does not want to b like her mother...can she change her fate? Raven has dark hair with purple streaks mixed in, and looks darker than her royal counterparts. This doll is available for preorder.

Talk about a mixed marriage…Cerise Hood is the daughter of Little Red Riding Hood and The Big Bad Wolf. Because wolves in fairy tales are the bad guys, she does her best to hide who she really is. That can be difficult because when she gets angry, her wolf side comes out!

There are also a few other Rebels to round out this side of the tracks. There is:

Kitty Cheshire, the offspring of the Cheshire Cat.

C.A. Cupid, the adopted daughter or Eros. She is a cross-over character from Monsters High.

Hunter Huntsman is the son of the Huntsman who appears in several different fairy tales. Because he is a rebel, his relations ship with Ashlynn Ella, Cinderella’s daughter, must be kept secret. A little bit of Romeo and Juliet going on here.

Madelyn (Maddie) Hatter is the child of The Mad Hatter. She loves tea!

Who are the Royals?

The Royals have their own unique cast of their own.

Apple White, the daughter of Snow White, is the lead royal. She embraces her destiny, as it ends happily for her. But not everyone in school wants to embrace theirs, and she does not understand why.

Briar Beauty is Princess Aurora, aka, Sleeping Beauty's, child. This princess does not seem to mind that she will have to be asleep for one hundred years, as her tale has a happy ending.

Ashlynn Ella is the offspring of Cinderella, and she has a thing for shoes so she run a shoe shop. She is afraid to show her love for Hunter, as he is on the other side. 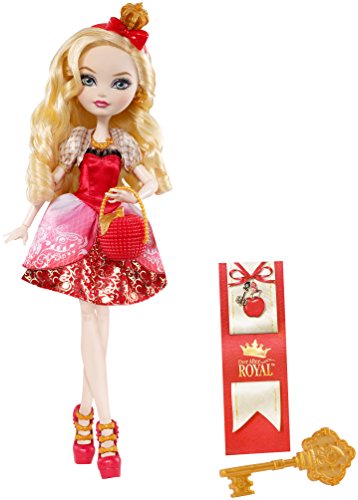 Ever After High First Chapter Apple White Doll Amazon Price: $19.99 $12.95 Buy Now(price as of Jan 24, 2016)
Although it makes one wonder why Snow White and Price Charming would name their child after the fruit that poisoned her, this delicious doll is quite a beauty. WIih long blonde hair and a fancy red outfit, this doll is one your daughter will surely be asking for.

The other royals are Blondie Locks, the daughter of Goldilocks and Daring Charming, whose father was once a prince and is now a king.

These dolls sell out quickly and the newest ones are set to be on store shelves on October 27th And are also available for preorder.

Ever After High dolls are one of the top 10 Christmas gifts for kids in 2013. With more accessories and stories due to come, Mattel may have another winning franchise on their hands.