Explaining Death and Helping Children Through the Stages of Grief

It is a well known fact that children are less sophisticated in expressing their feelings and emotions than are adults.  However, pet loss or the loss of a parent or loved one impacts children significantly; and they often need help to guide them through their grief.

Most people are quite familiar with the stages of grief as outlined by Elizabeth Kubler-Ross in her book On Death and Dying, published in 1969.  Though originally targeted for terminally ill patients, Kubler-Ross included other traumatic losses as also going through the five stages she outlined.  She contended that people who experience a significant loss will go through at least two of the stages; not necessarily in order.   Furthermore, the stages can be "revisited" throughout the grieving period. Kubler-Ross identified these stages as:

How to Explain Death to Children

Developmentally, young children (preschoolers) have little concept of the finality of death. They see it as something that is reversible.  When children are between the ages of five and nine, their concepts of death changes and they begin to become aware of the finality of death; though they don't view it as personally relevant.  From ages ten through adolescence, developmentally, children become fully aware that death is irreversible.  They begin to work through their own fears and beliefs of death.

Talking to preschoolers about death can be challenging and adults often feel uncomfortable with the subject that has long been "taboo" to discuss.  Preschoolers usually need short simple answers to questions.  They won't understand lengthy discussion about death.  It is beneficial to relate death to something the child understands; Uncle Bob died so he can't breathe, or run, or laugh, or talk, anymore.

Children will ask questions to try and understand.  Adults need to answer the question as straightforward and simple as they can without going into long explanation.  Parents often get caught up in trying to explain something in great detail when simple is so much better.  An example is when a child asks "where did I come from?" and the parent tries to explain where babies come from and the child answers "But where did I come from-Jimmy came from New York-where did I come from?"

Children can become confused by words that are intended to be reassuring.  Telling a child grandma just went to sleep and didn't wake up may elicit fears of sleeping; telling children  someone "just went away and didn't come back" may bring fears of separation. Telling children someone is "with God" may give them the impression God will now come and take them.  These types of phrases need a bit more thought and explanation for the child.  If only told grandma died because she was old; children may believe only old people die and when they learn  young people die too, their trust is undermined. It is more reassuring when explained people die at different ages and grandma lived a long time and then died.

Helping a Child Through the Stages of Grief

Understanding the developmental level of a particular child is helpful to assist in explaining death.  The second factor that is important is the experiences the child has gone through.  Taking into consideration these two factors, adults can formulate ways to help children through the stages of grief.

Children may be more impacted by pet loss than the death of an aunt.  This is normal.  Any loss, whether by a death, a divorce, moving, even going to school, can be traumatic for children.  Helping them get past the grief entails listening and validating.

Just as adults do; children react to loss in a variety of ways.Here are some suggestions in helping them cope:

Withdrawal. Set a time to talk with them; acknowledge the difficulty of sharing feelings; engage in some physical activity such as coloring or drawing together; adults can demonstrate by talking about their own feelings in the child's situation; give words to the child's feelings.

Belligerent Behavior. Talk with them one-on-one. Validate their feelings and share the impact of their behavior on those around them; ask direct questions; help them understand they have a right to their own individual feelings.

Depression.  Address the signs directly; shift the focus and help the child address the immediate needs of getting through the day; limit exposure to media coverage.

Regressed Behavior. Validate their feelings and help them feel more secure by holding them, reassuring them of their safety, give words to their feelings, point out obvious connections that imply trust for example "I came in and checked on you like I promised."  Don't make promises that can't be kept; give only information that is asked for; keep life as normal and routine as possible.

It takes time to heal from a loss.  Children are no different in this regard than adults.  They may not verbally express their grief; but all the same they will let adults know they are hurting.  Helping children through the grief process enables them to move on to acceptance in a healthy manner. Taking opportunities to discuss death before it is an emotional issue, such as insects or flowers, or when a prominent figure dies, gives children information that can be drawn upon in an emotional situation.

The copyright of the article Explaining Death and Helping Children Through the Stages of Grief is owned by Cheryl Weldon and permission to republish in print or online must be granted by the author in writing. 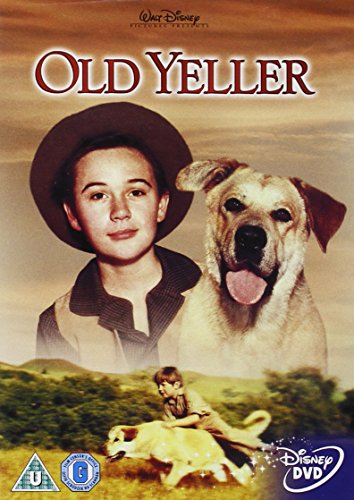 Disney Old Yeller (1957) [Region 2] Amazon Price: $3.86 Buy Now(price as of Sep 27, 2016)
"Old Yeller" is one of the classic "boy loves his dog" movies. It also depicts the grief he and his siblings undergo with the pet loss. Tender hearts will need a box of Kleenex for this one.
Next >> How to Get Creative Juices Flowing - Get Your Body, Mind and Soul on the Same Page