Are you interested in testing video games and getting paid? In addition to writing for InfoBarrel (Sign up Free) I also make money by play testing video games online Want more info? Click here < G+
InfoBarrel is a writing platform for non-fiction, reference-based, informative content. Opinions expressed by InfoBarrel writers are their own.
InfoBarrel > Entertainment > Games

Extremely Cool Racing Games - The Best of the Best

Below you will find some of the best racing games of all time, from the classics on the NES to the best series of the day on current generation consoles. Sorted into different categories, these are some of the best franchises out there. If you are a fan of speeding around tracks in high powered driving machines be sure to check these out.

First released in 1992 by Nintendo, Super Mario Kart came on the scene as a huge success on the SNES. Featuring popular Nintendo characters and items with tracks based on levels from Mario games; as well as the magical Rainbow Road, with its crazy colors and space setting, the level has become a well known destination.

You will be racing around Mario themed tracks and battling other Mario characters for first place while collecting items, coins and speed power ups from around the track. Keep an eye out for short cuts, thwomps and the other racers as they will be trying to out do you with the same items as well. Items are some of the best in this game, like the famous lightning bolt, which shrinks opponents and lets your run them over, to the spiky shell which seeks and destroys the first place racer.

Along with the Grand Prix main mode where you can race against the computer to win Cup challenges, it also features Battle, VS and Time Trial modes to play by yourself or with friends. The characters, items and tracks make this game a favourite, even after many, many updates and remakes for new consoles, including: Mario Kart 64 on N64, Super Circuit for GBA, Double Dash for GameCube, DS and Wii versions and Mario Kart 7 and 8 for the 3DS and Wii U. Other franchises have tried to spin their main characters off as racers with some success, but none can topple the original awesomeness of Mario Kart.

If you love Mario Kart as much as me 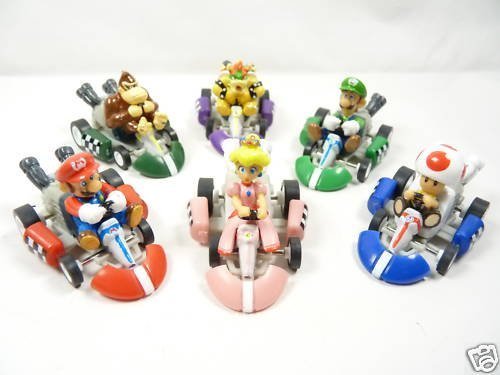 The Forza franchise is as good as it gets for putting you in the seat of a real life car and racing around a famous course, or even getting under the hood with customizations in the garage. With hundreds of cars to choose from, the whole gamut of commercial production street cars are included, like the Ford Focus and Audi S4 to the Aston Martin Vanquish and Bugatti Veyron as well as super cars and professional race cars.

It stays true to life as you race around real world tracks and face off against actual professional drivers as well; want to race on  Nürburgring Nordschleife with Allan McNish? You can do it. Afterwards you can go back to the garage, change your transmission and tires and have a rematch. Further adding to the realism is the superbly done audio and the ability to use a steering wheel controller. This game really gives a fantastic experience of being there.

For a racing game on your mobile device, Real Racing is ahead of the curve. It doesn’t just look beautiful, with its awesome graphics, but it also plays like a dream. The game engine is fast and responsive and doesn’t lag your device, it has been designed perfectly for the platform. In the wheelhouse of great design are the control methods available; 5 in all so you can choose the one that fits you. The most unique feature about mobile racing games is the ability to use the phones accelerometer to detect tilting of the device left and right to steer, nothing is more fun than driving down the track, steering left and right and imitating the roar of an engine. Of course, if you prefer, you can also use the on-screen steering options.

Each version of this game continues to improve the graphics and gameplay, as well as the inclusion of new licensed cars and cool tracks. Unfortunately with the launch of Real Racing 3, published by EA, a new freemium business model has been introduced which comes off as a bit of a cash grab and is pretty annoying, however the game play and racing experience are still top notch.

In the free flash game market the variety in racing games is wide indeed. Many are lacking in important areas and the realism is usually not true to life, but you may not always be looking for a realistic racer. Renegade Racing is a lot of fun for a side scrolling, stunt filled cartoon racing game.

From your humble beginnings in your classic Morris you’ll race through 18 levels on 6 different track types, completing achievements ranging from doing front flips to collecting coins to earn extra cash in order to boost your cars stats and upgrade to the next great automobile. From monster truck to police car to delorean there is lots of fun to be had testing yourself against computer opponents, wiping out and turbo boosting your way to victory. For a free flash game, this one is a lot of fun.

A lot of people will recognize Captain Falcon and his famous FALCON PUNCH!!! from the Smash Bros. Series, but his origins are slightly less well known. Captain Falcon comes from the F-Zero franchise, where he was developed as a character and was originally going to be the face of the SNES. He has carried the F-Zero torch which was first lit in 1990 with the release of F-Zero and ended in 2004 with F-Zero: Climax.

The series features jet powered hover cars in futuristic settings which race through alien and high tech tracks through dangers like mines and over hyper boost pads trying to win the race while avoiding catastrophic damage. This is a case of a game with a great original title that got put on the back burner, with 8 years separating the original from the next North American release. The cool setting and graphics along with fun of driving a tricked out hover car with jet engines make this game a top pick.

For the "on the water" category we have Wave Race, a jet ski racer series with a little known title for Game Boy released in 1992 but a much more popular N64 title truly launching the franchise in 1996. A third title for GameCube, Wave Race: Blue Storm, was released in 2001 as well.

Racers must tackle wrecking in high waves, jumps, tight turns as well as the slalom buoys which must be navigated on specific sides. The game differs from other racing games by being on jet skis, which results in a much different feel from accelerating to turns and also with the cool feature of tricks like diving after jumps and front flips. The water effects are also quite interesting, with waves and wakes giving each race a different feel, the water itself is one of the most interesting features. Different racers have different skills with the heavier racers having higher top speeds but slower acceleration and also different handling and grip. If you are looking to change things up from standard racing games, Wave Race is a great choice.

First released in 1994, the Need for Speed series has since released over 20 titles. With so many different titles there are many different experiences but the essence of Need for Speed are the cool cars and awesome street races. Some races, like police pursuits let you play as the police or as the criminal and are a change up from the standard races. The change in scenery from many other racing games makes it fun and exciting as you evade traffic and avoid damage while racing your rivals through cities and past other cars.

The series also has an impressive car list, from classics cars going as far back as the 1950s Monza and 1975 Silverstone, up to current model years. Many of the games draw a lot of inspiration from The Fast and the Furious movies and looks and specs of the cars are very customizable. The unique settings and awesome number of cars make the Need for Speed series the pick for street racing and it is no surprise that it is one of the most popular franchises, with over 100 million units sold.

Need for Speed: Most Wanted

Excitebike, the original motocross racing game was a launch title in 1985 for the NES and is one of, if not the original console racer. By today’s standards, the controls are simple and the graphics are crude but has been the source of many hours of fun. Being a side scrolling racing game means that there are no turns, rather the course is straight, but has different sized jumps as well as different lanes to race in with muddy obstacles in some. The faster you go, the higher your temp meter gets and the challenge is to continue without overheating.

Since the original release, there have been several titles to share the name including Excitebike 64 and Excitebike: World Rally for Wii. The game is one of the true classics and if you appreciate the racing games of today you should give this one a try to see just how far we’ve come since 1985.

Listen to that engine purr

This rather dark series pits racers against each other  in heavily modified personal vehicles, armed with heavy guns, missiles and crazy special weapons unique to each of the varied, but entirely psychotic drivers, all of whom are looking to destroy each other to be the last one standing and gain a single wish from the mysterious tournament master. The first game in the series was release in 1995 and new releases have continued going strong since then.

Much of the focus is on the story here, as each character has their own backstory and reasons for looking for the ultimate prize. The cars are each very different and quite elaborate, from the psychotic clown driving the armoured ice cream truck to the insane young girl with the doll mask attached to her face driving the giant semi truck. Races range from giant free for alls with many drivers looking to destroy each other, to one on one fights.

The weapons are super awesome, the plot is dark and twisted and the action is intense. More a driving/battle game than strictly a racing game it is one of the best selling of the genre and a lot of fun especially when you find yourself up against massive opponents and with the use of incredible special weapons at your command. Whether you play for the deep story line or the frantic action, Twisted Metal is a lot of fun.

If you want to know about other awesome video game franchises, more good racing games or learn about some top baseball games you can read more on InfoBarrel.