“An abnormal reaction to an abnormal situation is normal behavior.”
- Viktor Frankl

Death is the thing that most people fear more than any other life event.  It is because it forces one to accept the life’s limits.

With the Death of any person the life of others and the world does not cease; it merely keeps existing, going on about its business.  This vanity – “the world would miss me” – is what helps fuel beliefs in an afterlife and a belief in ghosts.  “I’m too important to not be noticed or to not deserve a ‘better place’ when I die” – the sentiment reeks of narcissism.

More rational people go through life accepting that the time they have is what they are allotted and there will be no other realm awaiting them.  Such people enjoy life, learn lessons from it, and are in a far better position to avoid disappointment when their Time comes.

For those who have experienced Death up close this reality of a finite end is a given.  One man took perhaps the worst of imaginable human experiences, internment in a Nazi Death camp, and used it to make his living time on the planet more fruitful and fulfilling.  He created a philosophy of self-actualization in the process, logotherapy.

He also came away with two great examples of Death stories, one from personal experience and the other a retelling of a very old Persian fable.  He learned that life would go on without him and that Death was embraceably unavoidable, and he shared this knowledge in a memoir called Man’s Search for Meaning.

Logotherapist
Viktor Emil Frankl was born in Vienna, Austria, of Jewish ancestry in 1905.  He had the good fortune to come from a family of educated people, and he developed an early interest in psychology.  He later attended the University of Vienna’s medical school, where his psychiatric interests bloomed – he was influenced by pioneers Sigmund Freud and Alfred Adler.

Credit: subletea.comFrom 1933 to 1937 he completed his residency at a hospital where he was assigned to work with suicidal women.  It was recorded that he treated roughly 30,000 women with suicidal thoughts or tendencies during his term there.

The Nazis invaded and assumed control over Austria in 1938.  Frankl’s heritage as a Jew restricted his medical practice, and the Nazis prohibited him from treating any patients the Nazis considered “Aryan”.  He rose to head up a neurology department in 1940, and in 1941 he married.

Sensing the anti-Semitism in Austria thanks to the Nazi occupancy, Frankl made plans to flee to the United States.  His parents, however, did not wish to leave, and knowing they would face persecution alone, he elected to stay in Austria with them.  In September of 1942, he, his parents, and his wife were shipped off to a Nazi-controlled Jewish ghetto.  Because Frankl’s medical background was valuable to the Nazis he was assigned to a psychiatric care ward.

Increased persecution meant, however, that Frankl could not live in peace.  He and his wife were removed to Auschwitz’ concentration camp in October 1944.  Frankl was separated from her, and moved on to another camp (affiliated with Dachau’s machinery).  His wife was sent to Bergen-Belsen from Auschwitz – Frankl never saw her again as she died there. His mother was gassed at Auschwitz and his brother died working as a slave laborer in a mine when assigned to Auschwitz.  The only member of Frankl’s immediate family who survived the death camps was a sister.

Frankl’s position as a medical doctor helped him survive but just barely.  Like the other prisoners, food was scarce for him, he was near starving, and anything that could be traded for food was important.  Moved to a new camp (also affiliated with Dachau) in March 1945, he learned to hoard cigarettes (rationed at a few per week) and to trade them for a crust of bread or to get a fuller scoop from the server when meal times meant a watery soup with the more nourishing bits of meat and vegetables at the bottom of the pot.

He made one attempt at escape, injuring a leg in the process – his partner in this venture was summarily shot, but Frankl was spared because of his medical skills.  He was finally assigned to work for a farmer in the area of his camp.  When liberation came, he merely told his Nazi guards that he did not wish to return to the camp.  Having no vested interest in him – having learned of the liberation – the guards let him walk away from his work assignment.

He found his way back to Vienna where in 1946 he began working in a neurology clinic.  He married again in 1947, and the couple (mixed Catholic-Jewish) had a daughter who later became a child psychologist.  He was a professor of neurology and psychiatry beginning in 1955 at the University of Vienna.  He spent several years as a visiting professor in the United States: Harvard (161), Dallas’ Southern Methodist University (1966), and at Pittsburgh’s Duquesne University (1972).  He spent his later years as a globetrotting lecturer, teaching seminars in his newly-developed philosophy he called “logotherapy”, his belief that striving to find a meaning in one’s life that is the primary, most powerful motivating and driving force  (a self-actualization program using love and compassion to realize ones goals).  He ultimately received 29 honorary doctorate degrees, and he published 39 books during his lifetime.

During his last months in the concentration camps, Frankl had started making notes in 1945 for what would become his first book (...Saying Yes to Life in Spite of Everything: A Psychologist Experiences the Concentration Camp, later titled Man’s Search for Meaning when first published in English in 1959).  A section was added to later editions outlining his logotherapy philosophy.

Tree of Life
Man’s Search for Meaning detailed his experiences in the camps, the hardships endured, and the atrocities he witnessed.  There were some emotionally moving moments, however, amid the torments, and Frankl recorded several stories of compassion (extended to him and to others) and of simple human dignity.

Credit: Jacopo Ligozzi (1547-1627), public domain
One he related had to do with the acceptance of Death and how a rational person perceives that life will go on regardless of a single death:

A young woman knew she was going to die within the next few days, but despite that certain knowledge she was cheerful.

“I am grateful fate has hit me so hard,” she told her attending physician.  “In my former life I was spoiled and did not take spiritual accomplishments seriously.” Pointing toward the window of the hut that served as the infirmary, “This tree here is the only friend I have in my loneliness.”

Through that window she could see just one branch of a chestnut tree.  On the branch were two blossoms.

“I often talk to this tree,” she continued.

Her care-giver wondered if she was delirious or suddenly subject to hallucinations.  Anxiously, he asked her if the tree ever replied to her.

What did it say to her?

Credit: public domain
Another story Frankl collected had to do with Death’s inevitability, that no matter what one does or how one bargains, Death will be waiting.
This one is an ancient tale from the Near East:

A rich and powerful Persian once walked in one of his many opulent gardens with one of his favorite and most trusted servants.  Suddenly, the servant cried out that he had just met Death who had threatened him.  He begged his master to please give him his fastest horse so that he could make haste and flee to Teheran, which he could reach that same evening.  The servant believed losing himself in the masses of the city would certainly hide him from Death.  The wealthy man consented; his servant galloped off on the master’s fastest and mightiest horse.

On returning to his house the master himself met Death, and asked, “Why did you terrify and threaten my servant?”

“I did not threaten him.  I only expressed surprise in still finding him here when I planned to meet him tonight in Teheran,” Death replied.

Frankl was awarded the American Psychiatric Association’s Oskar Pfister Award (for important contributions to religion and psychiatry) in 1985.  Death came for him on September 2, 1997, in the form of heart failure.  He left behind his second wife, his daughter, two grandchildren, and a great-granddaughter.

He also left behind a great body of literature that explored the human compassion and potential. That is better than any ghost. 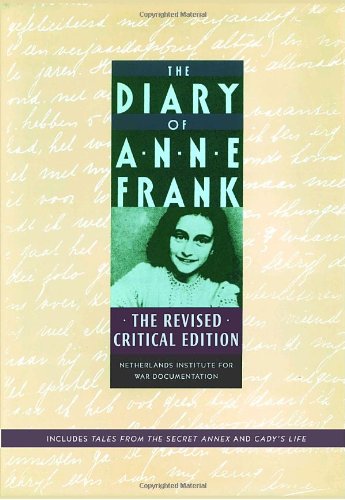 The Diary of Anne Frank: The Revised Critical Edition Amazon Price: $75.00 $39.65 Buy Now(price as of Mar 1, 2016)
This monument to a quiet Jewish girl is worth it. Included are the original, unexpurgated writings (later censored by her father for general publication).