And the Unique Agate

What is a Garnet?

Garnets are a group of stones that have been appreciated since at least the Bronze Age. They can be used as both gemstones and abrasives. The word garnet means dark red and garnets can sometimes be polished to look like deep red rubies. Fortunately, however, people with a January birthday are delighted by the fact that these wonderful precious gems tend to sell for less money than rubies.

Despite the fact that the word garnet means dark red, the stone actually comes in many colors including yellow, orange, blue, green, purple, red, black, brown and pink. There are also colorless garnets. The rarest type of garnet is the blue garnet. Garnets can be found in Madagascar, Russia, Turkey and the United States. Some garnets can even change colors if they are viewed in sunlight, and then under incandescent light indoors! They are fascinating stones.

Use this link if you are interested in seeing the full line of birthstone jewelry that is available on Amazon.com.

What is an Agate?

Agates are an alternative birthstone for persons who are born in January. They are brightly colored, finely grained crystalline varieties of silica. They are often associated with volcanic rocks. Agates were widely used in ancient times, going back at least as far as Crete during the Bronze Age. Some agates, when cut at an angle, or on the transverse, contain beautiful parallel lines. These are sometimes called banded agates or striped agates. Depending on the size of the agate, these banded agates are beautiful and can be used to create anything from vases to pendants.

Agates, when used as the January birthstone, give the wearer additional choices in birthstone jewelry. Agates come in a wide variety of colors and are often carved into colorful beads. Ancient Sumerians and Egyptians used these agate beads as gem stones. Agates are also used frequently in hardstone carving, going back to ancient times. Because agates often come in quite large pieces, they can be carved into small vessels such as vases. Smaller pieces are often used in jewelry.

Garnets vs. Agates as the January Birthstone

Gemstone quality garnets have been used in jewelry and crowns. In Anglo-Saxon England garnets were often inlaid into gold cells in a style called garnet cloisonne. Historically, the garnet was thought to stand for perseverance, consistency, patience and the truth. These values make it a worthy birthstone for people who are born in January, the first month of the year.

Agates are usually not considered as valuable a stone as the garnet. However, they are quite affordable, and can make an attractive alternative when choosing a piece of January birthstone jewelry, especially for those who love the color diversity and patterns often found in agates. In fact, agates are often chosen because they can be used to create such unique, stunning jewelry. In addition, since the garnets typically used in birthstone jewelry is the deep red variety, some people prefer agates if red is not a color they prefer to wear.

Where to Buy Garnet Birthstone Jewelry

Birthstone Jewelry for all the months of the year can be purchased in virtually any jewelry store or department store that has a fine jewelry department. Stores such as Macys and Nordstrom's frequently have a selection of garnet jewelry available. However, if you want a large selection, you may prefer to shop online at a site like Amazon. In a recent search on the Amazon website only, there were hundreds of designs of garnet jewelry available.

Garnet jewelry is also quite affordable compared to other precious stones like diamonds and rubies. Beautiful garnet earrings set in sterling silver were recently available online in a variety of styles for less than $50. You could also find a diverse selection of garnet rings, bracelets and necklaces online.

Garnets Combined with Other Stones

Garnets are often mixed with other types of stones. For example, you may want to select a piece of jewelry that combines garnets with pearls or diamonds. The contrast enhances the deep red color most often associated with the garnets used in jewelry. The price of your jewelry goes up, of course, when you combine the garnets with other precious stones, or when the stones are set in gold or platinum rather than sterling silver.

Where to Buy Agate Jewelry

One of the charming aspects of agate jewelry is the sheer diversity in colors, shapes and patterns. Different colors of agate are often combined in a single piece of jewelry to create colorful works of art.

What You Should Know About Buying Jewelry Online

Whether you select your jewelry from a catalogue or from an online jewelry site, you need to be aware that natural stones are going to vary from one piece to another. If you purchase a garnet necklace, for example, the depth of red color may be either lighter or darker than what you see in the catalogue or on your computer screen. The same will be true for anyone selecting agates. In fact, this may be even truer for agate jewelry, since the colors and designs of agates vary so dramatically. While most deep red garnets look very similar, if they are cut and faceted the same, it would be almost impossible to purchase two agate items that looked exactly alike.

Link to the full line of birthstone jewelry that is available on Amazon.com.

A Beautiful Set of Garnet and Silver Jewelry 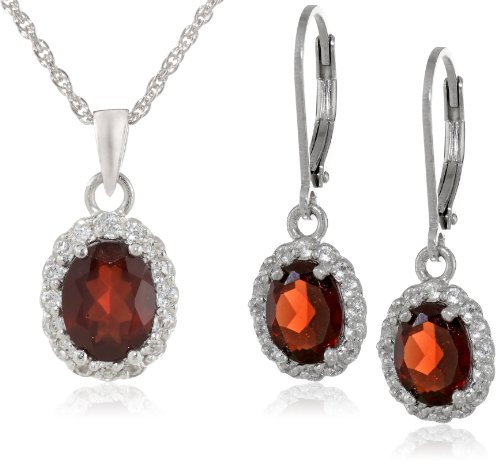 Sterling Silver Garnet Lever Back Earrings and Pendant Necklace Set, 18" Amazon Price: $125.00 $60.88 Buy Now(price as of May 31, 2015)
This affordable set of garnet jewelry is sure to please the woman with a January birthday. 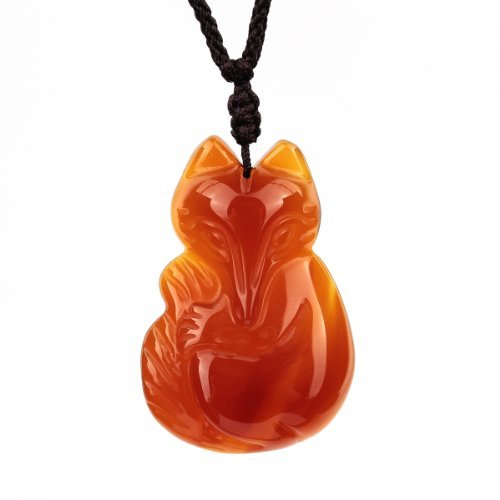 O-stone Red Agate Fox Queen Pendant Necklace Grounding Stone Protection Amazon Price: $76.00 Buy Now(price as of May 31, 2015)
Agates come in a variety of colors and can be cut into adorable shapes, like this cute little fox pendant.
Next >> Creative Organization: 4 Jewelry Display Solutions