Scream was one of the more interesting horror movies that came out in the 1990’s as it seemed to have the perfect mix of high-intensity scares mixed with clever wit and humor. Fans of the horror genre approved of the concoction and went to see the film in droves. Because of an incredibly clever script by Kevin Williamson, inspired directing by Wes Craven and solid acting by every member of the cast, you have a true horror masterpiece that will be on movie lists for a very long time.

Dewey • (to Tatum) What did mama tell ya? When I wear this badge, you treat me like a man of the law. • She just wants to get an education! • (to Gale) Well, a serial killer is not really accurate. Gotta knock off a couple more to get that title. • You’re not scared are ya?

Gale • If I’m right about this, I could save a man’s life. Do you know what that could do for my book sales? • Look, Kenny. I know that you're about fifty pounds overweight, but when I say hurry, please interpret that as MOVE YOUR FAT TUB OF LARD ASS NOW! • (last lines of movie) Okay I think it's going to go something like this, just stay with me. Hi, this is Gale Weathers with an exclusive eyewitness account of this amazing breaking story. Several more local teens are dead, bringing to an end the harrowing mystery of the masked killings that has terrified this peaceful community like the plot of some scary movie. It all began with the scream of a 911, and ended in a bloodbath that has rocked the town of Woodsboro. All played out here in this peaceful farmhouse, far from the crimes and the sirens of the larger cities that its residents have fled. Okay, let's take it back to one. Come on, move it! This is my big shot. Let's go.

Killer on Phone/Ghostface • What’s your favorite scary movie? • You should never say “who’s there?”. Don’t you watch scary movies? It’s a death wish. You might as well just come out here to investigate a strange noise or something. • Lucky for you there's a bonus round, but poor Steve... I'm afraid he's out! • Can you handle that… Blondie? • Now for the real question. • (to Sidney) Looks like you fingered the wrong guy… again.

Randy • There's always some stupid bullsh*t reason to kill your girlfriend. That's the beauty of it all! Simplicity! Besides, if it gets too complicated, you lose your target audience. • It’s the millennium; motives are incidental. • Tell me something’, did you really put her liver in the mailbox, cause I heard that they found her liver in the mailbox next to her spleen and her pancreas. • Awww, now that’s in poor taste.  (Stu: What?) If you were the only suspect in a senseless bloodbath - would you be standing in the horror section? • Now that Billy tried to mutilate her, do you think Sid would go out with me? • What’s Leatherface doing here? • Look, here comes the obligatory t*t shot. • (while looking down at Billy’s dead body) Careful. This is the moment when the supposedly dead killer comes back to life. For one last scare. (and he does)

Sidney • Would you settle for a PG-13 relationship? (she then flashes Billy) • I am sorry if my traumatized life is an inconvenience to you and your perfect existence. • You sick f*cks, you’ve seen one too many movies! • (to Gale) Sorry I mangled your face.

Stu • Better liver alone. • I will totally protect you. Yo, I am so buff, I got you covered, girl. • Watch a few movies; take a few notes. It was fun. • (after stabbing Billy) Sorry Billy. I guess I got a little too zealous, huh? • You see, Sid, everybody dies but us! Everybody dies but us! We get to carry on and plan the sequel! Cause let’s face it, baby! These days, you gotta have a sequel! • (the phone rings while Stu is bleeding to death) Should I let the machine get it? • I think I’m dyin’ here man. • (on top of Sid trying to kill her)I always had a thing for ya, Sid!

Tatum • Her mom and dad found her hanging from a tree; her insides on the outside. • The janitor’s your superior. • Who am I? The beer wench? • Can I be the helpless victim? • Billy and his penis don’t deserve you. • No, please don’t kill me, Mr. Ghostface. I wanna be in the sequel. • Stupidity leak! • Cut, Casper. That’s a wrap. • Well, you're not going to be alone any more, right? If you pee, I pee. Is that clear?

2- Casey: Listen, a**hole!Killer on Phone: No, you listen, you little b*tch! You hang up on me again, I’ll gut you like a fish, understand?

3- Casey: Listen, I am two seconds away from calling the police.Killer on Phone: They’d never make it in time; we’re out in the middle of nowhere.Casey: What do you want?Killer: To see what your insides look like.

5- Killer on Phone: Name the killer in Friday the 13th.Casey: Jason! Jason! Jason!Killer: I’m sorry! That’s the wrong answer!Casey: No it’s not. No it’s not. It was Jason.Killer: Afraid not. No way.Casey: Listen, it was Jason! I saw that movie twenty goddamn times!Killer: Then you should know Jason’s mother, Mrs. Vorhees, was the original killer! Jason didn’t show up until the sequel! I’m afraid that was a wrong answer.Casey: You tricked me.

6- Killer on Phone: Hello, Sidney.Sidney: Um, hi. Who is this?Killer: You tell me.Sidney: Well I, I have no idea.Killer: Scary night isn’t it? With the murders and all it’s like right out of a horror movie or something.Sidney: Randy, you gave yourself away. Are you calling from work, cause Tatum’s on her way over.Killer: Do you like scary movies, Sidney?Sidney: I like that thing you’re doing with your voice, Randy. It’s sexy.Killer: What’s your favorite scary movie?Sidney: Oh, come on, you know I don’t watch that sh*t.Killer: Why not? Too scared?Sidney: No. No. It’s just, what’s the point? There all the same. Some stupid killer stalking some big breasted girl who can’t act whose always running up the stairs when she should be going out the front door. It’s insulting.Killer: Are you alone in the house?Sidney: Randy, that’s so unoriginal. I’m disappointed in you.Killer: Maybe that’s because I’m not Randy.

7- Dewey: Tatum, you can’t be here. This is an official crime scene.Sidney: It’s ok.Tatum: Her dad’s out of town, all right. She’s staying with us tonight.Dewey: Does mom know?Tatum: Yes doofus.

8- Gale Weathers: There she is. Sidney! Hi. That was some night. What happened? Are you all right?Tatum: She's not answering any questions, all right? Just leave us alone.Sidney: No. No. Tatum. It’s okay. She’s just doing her job, right, Gale?Gale: Yes, that’s right.Sidney: So, how’s the book?Gale: Well, it’ll be out later this year.Sidney: (sarcastically) Oh, I’ll look for it.Gale: I’ll send you a copy! (Sidney then punches Gale in the face)

9- Dewey: You’re not supposed to be here.Gale Weathers: I know. I should be in New York covering the Sharon Stone stalker, but, who knew? You look awfully young to be a police officer.Dewey: I’m twenty-five years old.Gale: You know, in a demographic study, I proved to be most popular amongst males 11-24. Guess I just missed you. Of course, you don’t look a day over twelve except in that upper torso area. Does the force require you to work out?Dewey: No, maam. Because of my boyish good looks, muscle mass has increased my acceptance as a serious police officer.

10- (in a crowded movie video store)Stu: You know who I think it is? I think it’s her father. Why can’t they find her pops man?Randy: Because, he’s probably dead. His body will come popping up in the last reel somewhere! Eyes gouged out! Fingers cut off! Teeth knocked out! See, the police are always off track with this sh*t. If they’d watch Prom Night they’d save time. There’s a formula to it! A very simple formula! Everybody’s a suspect! I’m telling you, the dad’s a red herring. It’s Billy.

12- Billy: It’s like Jodie Foster in Silence of the Lambs when she keeps having flashbacks of her dead father.Sidney: But, this is life. This isn’t a movie.Billy: Sure it is, Sid. It’s all, it’s all a movie. It’s all… one great big movie… though you can’t pick your genre.

14- Randy: (talking to people at party) Jesus Christ! You don’t know the rules?Stu: Have an aneurism, why don’t you.Randy: There are certain rules that one must abide by in order to successfully survive a horror movie. For instance… Number one. You can never have sex. (crowd boos) No. No. Big no no. Sex equals death, okay. Number two. You can never drink or do drugs. (crowd cheers) No. The sin factor. It’s the sin; it’s an extension of number one. And number three. Never, ever, ever, under any circumstances say, “I’ll be right back.” Cause you won’t be back.Stu: I’m getting’ another beer, you want one?Randy: Yeah, sure.Stu: I’ll be right back! (everyone makes an ominous sound)Randy: See, you push the laws and you end up dead. Okay, I’ll see you in the kitchen with a knife.

15- Dewey: Do you know what that constellation is?Gale: No, what is it?Dewey: I don’t know. That’s why I was asking you.

16- Sidney: Oh, my God. Randy, I thought you were dead.Randy: I probably should be. I never thought I’d be so happy to be a virgin.

17- Sidney: Why did you kill my mother?Billy: Why? Why! You hear that, Stu. I think she wants a motive. Well I don’t really believe in motives, Sid. I mean did Norman Bates have a motive?Stu: No.Billy: Did they ever really decide why Hannibal Lecter liked to eat people? Don’t think so. See, it’s a lot scarier when there’s no motive Sid. We did your mom a favor, Sid. That woman was a slut bag whore who flashed her sh*t all over town like she was Sharon Stone or something.Stu: Yeah, we put her out of her misery, cause let’s face it, Sidney; your mother was no Sharon Stone.

18- Stu: Did you really call the police?Sidney: You bet your sorry ass I did.Stu: (while crying) My mom and dad are going to be so mad at me.

Taglines • Someone has taken their love of scary movies one step too far. • Make your last breath count. • From the first name in suspense comes the last word in fear. • Don't Answer The Phone. Don't Open The Door. Don't Try To Escape.

15 Awfully Bad Horror Movies You Have To See To Believe

40 Of The Best Zombie Movies Ever Made 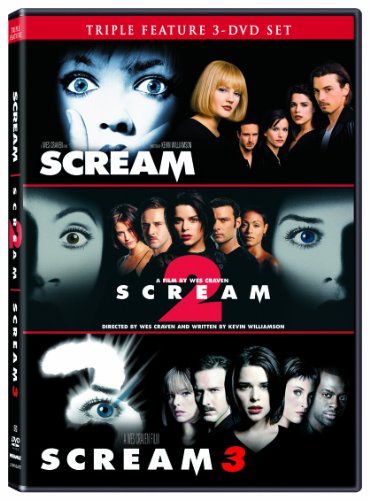