Dress Like the Fantastic Four and Dr. Doom for Halloween

When people think of a team of superheroes, different gourds come to mind. First, there are the Avengers, whose core group consists of The Incredible Hulk, the Black Widow, Iron Man, Captain America and Thor.

Another famous grouping is the Guardians of the Galaxy. Peter Quill, also known as Star-Lord, is the human in this quintet and kind of the leaders. Rocket Racoon, Groot, Gamora, and Drax the Destroyer each have their own person powers and contribute what they can to defeat evil.

Credit: Image made by Hannah Gold in picmonkey.com

Photo created on Picmonkey by the author

The Justice League consisted of Superman, Wonder Woman, Batman and Aquaman, to name a few. There are a few dozen members who band together to fight crime.

Another quartet of heroes that will behaving their story hit the big screen in the summer of 2015 are The Fantastic Four.

Who Are The Fantastic Four?

Created by Stan Lee and Jack Kirby in the early 1960’s, this team published the first 100 editions of the series on their own.

The genesis of this band of heroes began when Reed Richards, an aeronautical engineer who spent his inheritance trying to develop an aircraft that was capable of interstellar travel. One fateful day, Reed, his girlfriend Susan Storm, her brother Johnny, and Benjamin Grimm, Reed’s best friend, too a flight on the craft he had developed.

After taking off, a problem developed. The spaceship encountered cosmic radiation and the aircraft crashed. Although everyone aboard survived, their bodies had changed due to the radiation exposure. Everyone now had a new kind of power.

Johnny became the Human Torch because he could be engulfed in flames and not be harmed. He could also fly.

Susan became Invisible Woman due to the fact that she could just disappear into thin air.

Ben became the Thing because not only did he possess superhuman strength, he was disfigured.

Over the years, these four have been through all sorts of adventures. The new summer film that features the quarter will tell this tale in a very visual way.

The movie begins when the team are young and in school. Over time, we see them grow up and eventually take a fateful trip on a rocket ship. During their trip, they change forms and turn to Earth to help fight crime.

Of course, every superhero story has to have a villain. In this movie, his name is Victor Domashev, aka, Doctor Doom. A computer programmer who was originally named Victor von Doom in comic books, his backstory has been changed a bit for dramatic license. The fantastic Four have to save the world from his evil genius.

While Disney princesses tend to be the most popular costume for girls, for boys, they tend to lean towards any kind of superhero. Whether it is a pint sized one like Miles form Tomorrowland or a grown up Ant-Man or Guardian of the Galaxy, boys like to pretend that they also possess those wonderful super powers.

We tell children not to play with fire, but if you are the Human Torch, you are on fire! Have your child wear a gold or red sweatshirt and sweatpants to represent fire. Then add this mask and the light up gloves that also make a sound and you are good to go for trick or treating! 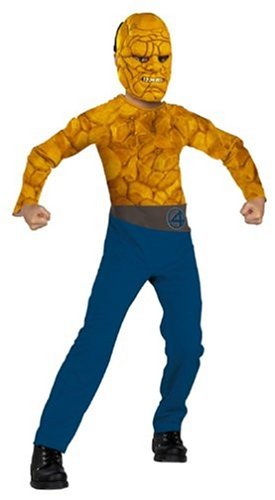 Fantastic Four The Thing Standard Child Costume: Size 7-8 Amazon Price: $11.48 Buy Now(price as of Jun 21, 2016)
No, he isn't pretty to look at, but The Thing is very powerful and someone you do not wish to mess with. This costume comes in different sizes and includes two pieces, the jumpsuit and the mask.

He is the ringleader of the group, and now your son can dress just like him with this Mr. Fantastic Muscle costume.

It is available in sizes 4-6, 7-8 and 10-12. This is a one-piece jumpsuit with padding to make your son look like he has been working out. The team’s emblem is on the front as well. Another version of a Mr. Fantastic costume is also available without the muscle padding.

If you have twins or a group of friends trick or treating together, they may wnt to dress up as the good guy and the bad guy. Since Dr. Doom is the villain, he could be paired up with any of the other characters from the team.

This mask is made from PVC and is adjustable.

Now You Can Look Like the Face of Evil 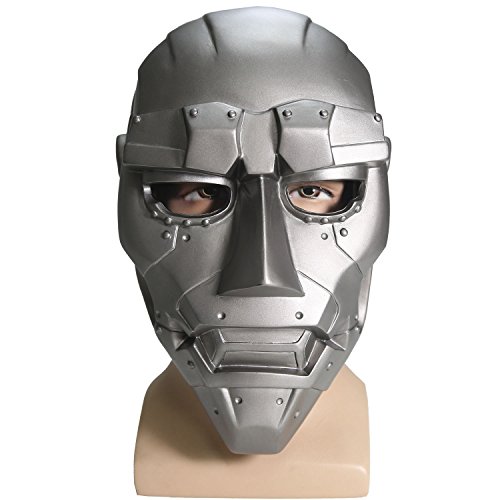 Xcoser Four Cosplay Fantastic Dr Doom Gray PVC Adult Mask Amazon Price: $39.99 Buy Now(price as of Jun 21, 2016)
I would not want to meet this guy on a dark street! 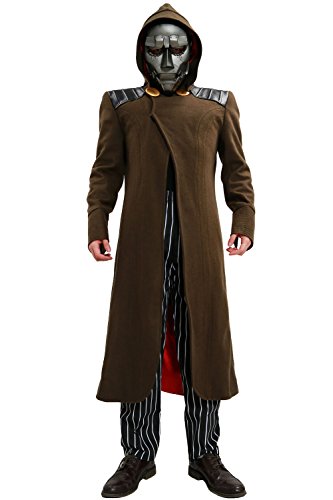 Fantastic Four costumes are going to be hit for Halloween!