Any cat owner worth his or her salt will want to give kitty some nice fun toys for play. One of the best lines of cat toys on today’s market is the catnip toys manufactured by Fat Cat Inc.

The company started out when a husband and wife team began a family tradition of exchanging handmade holiday gifts for the family cats.  It began as a joke but eventually became an annual competition.  Early designs were well received by consumers and retailers so the company decided to expand its operations.  Sales doubled each year and 15 years later, the Fat Cat Incorporated company joined

forces with Bamboo, a division of Munchkin Inc.

What makes these toys so special?  The designs tend to make owners and their pets laugh. Truly, the designs are unique, featuring among others the “Kitty Hoots,” “Really Bad Dog” and the “Doofus Dog Series.”  The toys are packed with organic catnip that drives felines wild.

Catnip, also called catmint, is the common name for nepeta, a genus of the flowering plant

Credit: Source: Wikimedia Commonsfamily Lamiaceae.  Catmint is native to Asia, Europe and Africa, but is now common in North America as well.  There are 250 species of catnip but the most common one felines enjoy is the common catnip.[2]  The plant has sturdy stems with green to grayish-green leaves that are heart-shaped.  The flowers of the plant are tubular and are usually white.  Other readily available species have flowers of pink, blue or lilac with tiny purple dots. The flowers cluster toward the tip of the stems.

Catmint has a mild sedative effect on humans and is often used in herbal medicines. It is used as tea, juice, poultice and tincture.  It has even been smoked.  It is known to have a slightly numbing effect.[2]   Isolated oil from the plant is a repellent against insects such as mosquitoes, termites and cockroaches.[2]

Why Does Catnip Effect Cats?

Not all cats are affected by catnip; it is a genetic factor which induces reaction to the plant. Those who do react do so with differing degrees.   Felines that do react may roll on it, paw at it, lick it, chew it, or salivate heavily.  Some felines leap about, purr or growl and may bite or scratch a hand that holds the plant.  Kitties may relax into a silly dreamy pose and not move for a while.

The chemical nepetalactone in the plant is what triggers the animal's response.[1] The chemical is an oil on the leaves and stems and is released when the plant is bruised which leads many experts to believe this is why cats eat or bite the plant when initially playing with it.  It is

Credit: Photo by Cheryl Weldonthought to produce a hallucinogenic effect when the feline sniffs it and a more sedation effect when it eats the stuff.[2]  The effect usually lasts from five to ten minutes.  The cat doesn’t overdose on it; it knows when to stop.  The feline's system can “reset” and after a few hours it may return to the catnip and react again.

Felines can become possessive of their catnip toys and some become aggressive if their humans try to take the toys away.  The plant should not be mixed in with food. Dried flowers and leaves of the plant are okay for cats to eat, but they shouldn’t eat the stems. Giving felines too much catnip can upset their diet and eating habits.

Domestic cats are not alone in their delight of the plant. Tigers, lions, bobcats, cougars and lynx have been known to also react to the active ingredient in the plant.[1]

Fat Cat Inc. line of catnip toys uses their trademark “zoom around the room” organic catnip.  Cats will love to lick and chase these humorous toys.  Many of the designs do not have any buttons or other materials that could detach and cause problems for kitty.  The “zoom around the room” catnip is organic which is much better for kitty. If purchasing catnip, it is best to buy “certified organic”  to avoid any pesticide or other contaminates.

Credit: Photo by Cheryl WeldonThe company also carries a line for the budget minded owner called “Cheap (but never cheesy) Cat Toys.”  This line offers the same quality and colorful designs and of course the same “zoom around the room” catnip inserts.  These catnip toys are little squares with laugh out loud inducing patterns.

Owners and their kitties will love Fat Cat Inc. catnip cat toys.  There are many funny designs from which to choose and the time spent playing with them will enhance the bonds between kitties and their humans. These toys can be found at most brick and mortar pet stores and many online retailers of pet supplies.

The copyright of the article Fat Cat Inc. Catnip Cat Toys Delight Cats and Humans is owned by Cheryl Weldon and permission to republish in print or online must be granted by the author in writing. 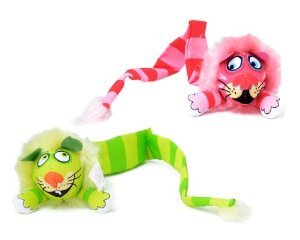